At the 2020 SolarPACES Conference in October, Wei Wu introduced her startup HelioHeat – that will be first to commercialize the CentRec® very high temperature particle receiver developed at the German solar research lab at DLR, able to attain heat of 1000°C.

HelioHeat’s 1000°C heat at just 1 Cent/kWh potentially ends the use of fossil energy for the production of steel, cement, food and chemicals. The start-up’s first customer is the world’s largest pasta producer, Barilla in Foggia, in the south of Italy.

The former DLR solar researcher told conference attendees (all online this year) that the startup she now heads up as COO with her former DLR colleague Lars Amsbeck, plans to target industries that account for about half of the worldwide industrial process heat demand – mainly the steel, cement, food and chemical industries. Their first customer is to be the world’s largest pasta producer, Barilla in Foggia, in the south of Italy.

The CentRec® receiver uses small ceramic particles to capture, transfer and store the heat. Currently, both parabolic trough and solar tower Concentrated Solar Power (how CSP works) plants use a fluid to transfer solar energy to store and use to generate power. However, such fluids have safe operating temperature limits between 400°C and 600°C.

The temperature limits of fluids like molten salts is why international solar researchers at Sandia in the US, Australia’s CSIRO, Saudi Arabia’s King Saud University, Germany’s DLR and others have long been investigating the use of particles instead. Particles like sand or bauxite are cheaper, have much greater energy density and can withstand much higher working temperatures, up to 1000°C today and potentially beyond. 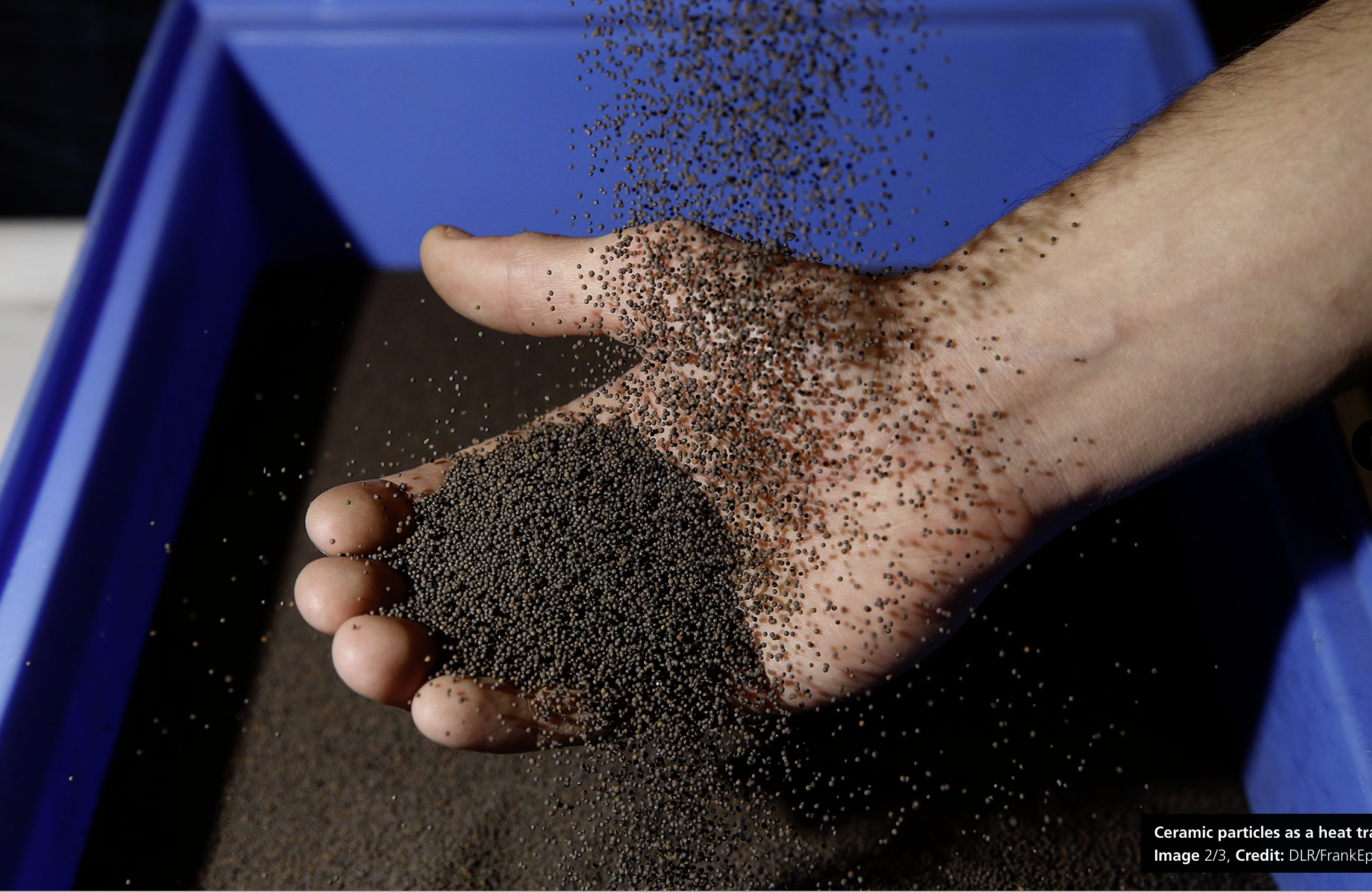 Particle receivers operating at these super-high temperatures would not only make CSP electricity production more efficient (which would bring prices down) but these high temperatures are also crucial to replace the burning of fossil fuels, by supplying high temperature heat for producing green hydrogen and other solar fuels as well as industrial heat.

Cement mixer inspiration for the CentRec®

In all particle receiver designs, gravity is deployed in various ways to move particles through the solar flux from a solar field of mirrors concentrating sunlight onto them, to heat the particles up. What researchers try to do is stop them falling too fast out of range of the solar flux aimed at the receiver up on a tower.

Back in 2010, Wu was one of these researchers investigating ways to prevent this too-fast exit from the cavity where they receive the solar flux, as a PhD candidate at DLR. “My receiver concept was a slowly rotating drum, so the particles were just falling down, and taken up again, and falling down again inside the nearly horizontal drum,” she said.

Having completed the design for a first prototype, she was excited to finally test it out in the lab. But her DLR colleague Lars Amsbeck and her supervisor Reiner Buck returned from a late night brainstorming flight with an improvement. They wanted to test a new concept, with a much faster rotating drum so that centrifugal forces would keep the particles pushed to the wall. But having finally figured out a development path for her original concept Wu was not eager to go back to the drawing board.

“I was like, oh no, I don’t want to do another concept,” she laughed. “I was just starting to build my test and experimental setup to prove the slow rotating concept. But when we had our first run, there was just too much dust development due to abrasion from particles falling on other particles.”

She explained: “You don’t want dust in the cavity because it will absorb the solar radiation and you won’t get your desired particle outlet temperature. So I had to start over with a new concept and at the end I was quite happy that there was already one.” 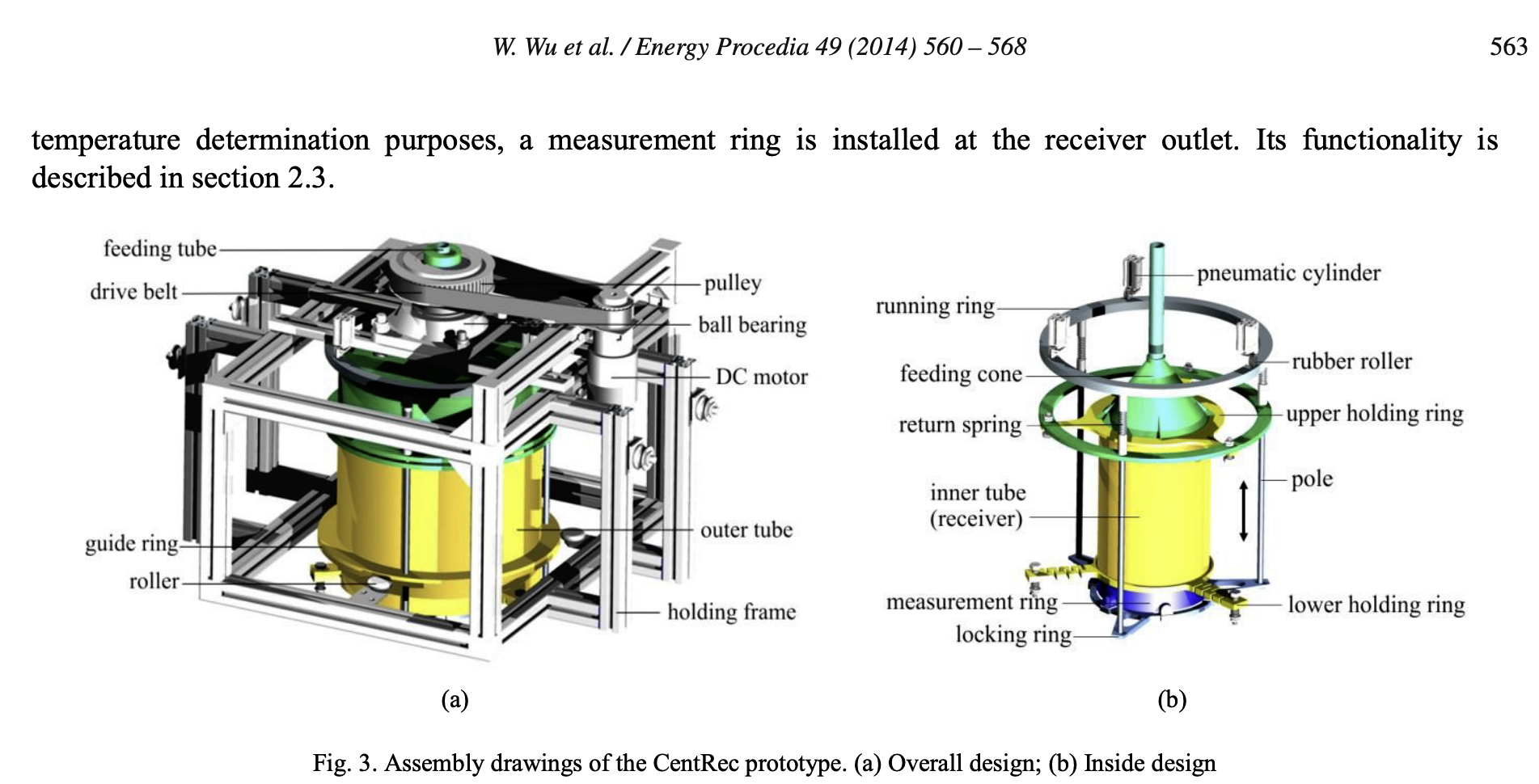 From lab bench to pilot

Wu and Amsbeck continued to work another three years on the faster rotating version: “Our first successful test was in 2012, when we could demonstrate that the receiver can heat up the particles up to 900°C.”

The test was indoors with simulated sunshine at lab bench scale with a 15kWth solar simulator. Small bauxite particles – like sand used by the oil and gas industry – were rotated within the centrifugal receiver, moving at 3 to 10 grams a second. The achieved receiver efficiency was around 75%. Previous research of a rotating kiln had a much lower thermal efficiency of 10-30%.

The particles once heated in the CentRec® receiver also act as both heat transfer and thermal energy storage. For an entire CSP plant, there can be also two-backup options, as most industrial heat is needed 24/7. To enable delivery of renewable energy round the clock, this backup method to heat the particles could be renewable electricity or renewable fuels such as hydrogen or biogas.

After Wu left DLR, her colleagues continued with tests indoors and a larger version at DLR’s on-sun outdoors solar tower at Jülich. In 2017, Amsbeck founded HelioHeat to participate in EU calls for funding a demo plant with the solid particle technology. In 2018, he and DLR colleagues successfully demonstrated once again the achievement of particle outlet temperature of over 900°C in on-sun tests with a 2.5 MWth prototype. Having won approval to receive the EU award, Amsbeck quit his job at DLR to focus on the new startup, and he contacted Wu to join the new startup to bring their technology to market.

While the inventors of the CentRec® receiver are Wu and her colleagues; as the research institution that funded their research, DLR holds the original 2010 patent for the basic concept and licenses it to the young company. HelioHeat also holds their own patent on a substantial performance improvement, and will be the first to commercialize CentRec®.

The path to market

The new firm was awarded 1.4 million euros in EC co-funding under the HiFlex Project to build the 2.5 MWth CentRec® receiver for a demo plant with 20MWh of thermal energy storage installed at the production site of the Italian pasta maker, Barilla. The pasta maker will use the heat produced by solar energy for their pasta manufacturing to reduce the consumption of fossil fuels.

HelioHeat will report on their progress in this project at the next SolarPACES conference in Albuquerque, New Mexico in the USA in the Fall of 2021. By 2023, the firm plans its first commercial plant at 100 MW, at an expected cost of 380 euros per kW and expects to get costs down to 220 euros per kW with mass production, by building 200 receivers per year, starting in 2025. Like another high temperature solar thermal startup, Heliogen (our story here) their target market is not electricity production, but all the industries that require extremely high heat and now burn fossil fuels to generate it.

Like all solar thermal plants, optimal locations for these heat-focused plants will be in high solar resource areas like Australia, South Africa, the US Southwest, Southern Europe, the Middle East, North Africa (MENA) or Chile. When combined with high fuel costs, these locations promise the best return on investment (ROI), as the World Bank told SolarPACES last year.

Wu estimates that once they enter mass production, the ROI would be high enough to compete with all fossil fuels, even in the US; which has the world’s lowest natural gas prices.

“We need to go down with our price to 1 cent per kilowatt hour in order to be competitive against the cheapest fossil fuels,” Wu noted in her presentation. “And what we show is that if we can deploy about 200 receivers per year – considering significant cost reductions through serial manufacturing – we can really reduce the cost of the receiver and be even competitive against coal.”