HELIOVIS has been running a demo plant in Spain for two years demonstrating their novel low-cost blow-up plastic tube solar collector for CSP. The small startup is fighting hard to get the industry-scale financial backing needed to introduce the technology and to make commercial sales. 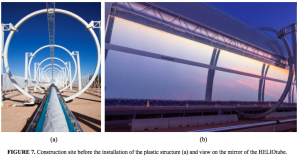 “We developed a solar collector that replaces the conventional parabolic trough mirror of CSP, as it is designed to drive down cost in each stage of the value chain to a total of around €90 per square meter of mirror surface,” HELIOVIS CFO Wolfram Krendlesberger told SolarPACES. Standard parabolic trough solar field CAPEX tend to be around 30% higher.

How this solar collector works

The simplicity of the solar collector design by this small start-up firm of around 25 engineers is ingenious: just an inflatable cylindrical solar collector made of three plastic films; a robust base film, a transparent film, and a mirror film.   The mirror film divides the long collector into two air-tight chambers running lengthwise through the tube. Small air-pressure differences between the top chamber (3.6 mbar) and the bottom chamber (2.9 mbar) cause the mirror film to arch downward. This creates a homogenous mirror channel that concentrates the solar radiation on a focus line in the upper chamber. 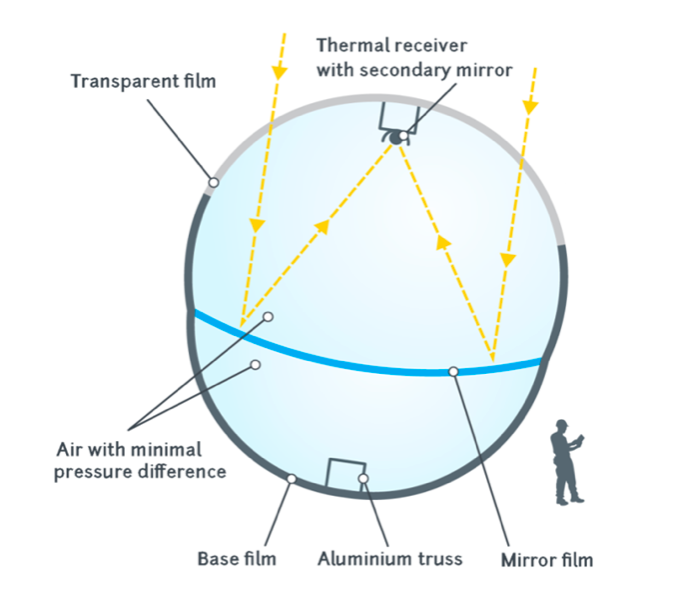 Each HELIOtube is nine meters (30 feet) in diameter and about 220 m (480 ft) in length. Through the transparent film on the top the sunlight can get into the solar collector and is reflected by the mirror film. There, in the same way as in regular parabolic trough CSP; the solar collector concentrates reflected sunlight to heat a fluid inside a thin metal pipe (the thermal receiver) that runs inside the tube along the focal line of the collector.

Once inflated with air, the robust and rigid tube is held in place by modular steel rings so it won’t be blown away as well as to allow for rotating the tube to track the sun, and for cleaning.

“We only have to clean the transparent film at the top which is made of a teflon-like inert material. Since you can rotate the tube by 360° this side becomes easily accessible for the cleaning procedure close to the ground,” Krendlesberger pointed out.

1. All the technical components; the thermal receivers and the mirror film, are completely encapsulated by the low-cost and lightweight plastic structure and thus never exposed to wind or abrasion.

2. Only the transparent exterior (about a third of the circumference) of the convex tube is exposed to dust and needs regular cleaning. Because of the low surface tension of the inert transparent film most of the cleaning can be carried out just using compressed air.

3. Because of its convex and aerodynamic shape, the HELIOtube creates a smooth wind field, eliminating wind turbulence between the rows. As a result, this innovative solar field avoids the need for costly wind protection measures, and this allows a row of PV panels to occupy the semi protected airspace between the rows. In this way the hybrid CSP/PV plant maximizes energy generation per square meter of solar field, as the hybrid plant predisposes to the generation of both electricity and heat around the clock. 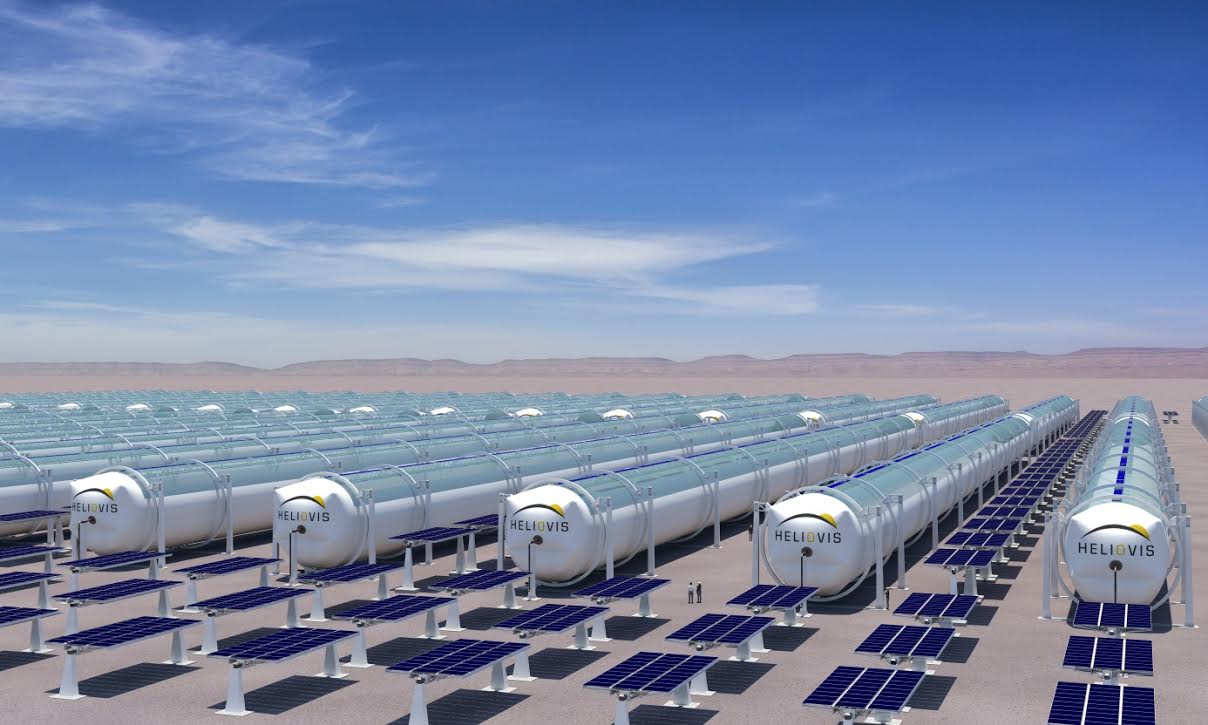 Apart from this solar field innovation, all the other components of a CSP plant; the thermal receivers, the heat transfer fluid (HTF), thermal storage solutions, the steam turbine and generator would be the same as in any standard parabolic trough CSP plant, which would operate at the upper limit of 400°C due to temperature limitations of the standard HTF.   However, Krendlesberger noted that the HELIOtube collector itself could actually run at temperatures of up to 550°C, from a low of around 90°C, which opens up the possibility of its use for heat or steam production for a wide range of industrial processes.

Due to its simplicity and advantages both in CAPEX and OPEX, the technology offers applications in two markets: not just electricity generation, but also solar heat or steam production for industrial processes.

“Our market entry strategy will perfectly work if we deliver the solar field in a range between two and 50 HELIOtubes. In that case, we could deliver the turnkey solar field and we could demonstrate the operation to the buyer,” he said.

HELIOVIS envisions sales in any of the world’s sunny regions with a Direct Nomal Irradiation (DNI) from at least 1,800 kWh/m2 and above, which covers a wide range throughout Southern Europe and the MENA region to much of China, Australia and the Americas.

From their headquarters in Austria, HELIOVIS currently operates their demo system in Spain remotely. “The tracking is fully automated via two systems and the data provision is remote controlled as well as the software and the safety backup systems. At our plant in Spain, all you need people for locally is for that simple cleaning procedure.”

“There are plenty of industrial processes that require not only electricity but also heat and some need it 24 hours a day. We identified some industries which would be sweet spots for our application, especially sea water desalination and brine treatment,” Krendlesberger said. Reverse Osmosis (RO) for example, requires electricity 24 hours a day.

“Sea water desalination needs an enormous amount of electricity, as the industry is dominated by RO. The toxic brine is usually discharged back into the water bodies. Due to the harmful effect on the environment this is less and less tolerated by local governments. So for environmentally friendly brine management, on the other hand, you need a lot of industrial heat.”

So the combination of PV and CSP provides the best way to decarbonize the process, offering both power and heat with solar energy.

“In Reverse Osmosis you practically have to run 24 hours a day. The cheapest way to provide clean electricity for that during the day is PV. But what do you do after sunset? Where do you get electricity? What is sometimes seen in the desalination market is they then just take it from the grid and say, look it is totally renewable, but this is not true of course because the grid is not 100% renewable,” he said.

“You will need solar electricity for all the night hours for the desalination process and industrial heat for the noxious brine treatment. So during the night the CSP storage provides the energy from the CSP field to the power block.”

Desalination brine concentrate is not allowed to be discharged back into sea water in an increasing number of jurisdictions. Tightening pollution regulations require that desalination plants must have zero liquid discharge (ZLD). Desalination plants are required to evaporate all the water out to crystallize the brine minerals.

“And then to crystallize these liquids you can only do it with a lot of heat, so this is a very nice sweet spot for us,” he commented. “Because we can provide clean solar for not just RO, but also for emerging desalination technologies like Forward Osmosis (FO) with or without ZLD or simply add a solar-powered ZLD facility to existing Reverse Osmosis desalination plants.” (The resulting brine concentrate also has market value as it contains minerals with industrial uses.)

The Valley of Death –  financial support to go commercial

However, like many innovators in clean energy technologies, HELIOVIS has to fight hard to get industry-scale investment following successful research-level demonstration. Many nations invest in clean tech research, but tend to fund innovation only up to pre-commercial demonstration. The HELIOtube pre-commercial demo plant in Spain, for example, was funded by the European Commission in the competitive Horizon 2020 scheme.

But nascent technologies need financial support even more, following success of a demo plant – to enable the ramp-up to commercial production. Between research and commercial success lies “The Valley of Death” – a scarcity of the industrial investment needed immediately after successful demo scale projects, to get to commercial viability.

No “hand-made” first sample used in a demo can be sold commercially. Big commercial suppliers of factory production of high tech material combinations like those incorporated within the HELIOtube cannot profitably sell to small startups because the assembly line runs are too small. One or two runs of the plastic and mirror film would be uneconomic for suppliers. So manufacturers need policies that support this investment on their part in helping birth new technologies.

And it is not only these potential first commercial manufacturers that need policy support to enable clean tech to replace fossil fuel technologies like desalination and brine treatment.   But also financiers. When HELIOVIS showed investors the demo plant they have run successfully in Spain for two years, they said they would rather need to see a ten-year full scale solar field in the desert, or at least full insurance coverage. And that is the big challenge.

Even so-called green banks sometimes behave like regular banks, rather than bridging the treacherous abyss between taxpayer-funded research and commercial sales.

“But when we went to the green banks, like the European investment Bank or the Asian Infrastructure Investment Bank, for larger scale funding, they shrugged and said ‘Well, we are a bank, so we are heavily regulated. We need to see bankability,” Krendlesberger said, pointing out the “Valley of Death” conundrum: “But if I can show you bankability, why do I need a special institution like a green bank when I can go to any commercial bank?”

The VC world is similarly blinkered when it comes to climate investment. Necessity may be the mother of invention, and climate destabilization is providing that necessity, but green tech investors don’t appear to be any more aware of the practical issues in mass production of real world clean energy technologies.

“Among the professional investors who say we are green tech investors; they literally always require first sales. So they also require revenue first. And this is ridiculous. You either have significant turnover with a decent power plant or zero. And if I have turnover, I don’t need expensive equity; I can go to my bank and get project financing,” he pointed out.