Over 30 years ago, the first batch of commercial parabolic trough solar thermal power plants were built in California in the 1980s. Until now the glass mirrors dominate all commercial CSP-technologies. However, there has been slow progress to improve the economic efficiency of parabolic trough plants as the CSP industry continued to rely on this old design.

It was the Austrian company’s HELIOVIS approach to develop not the most sophisticated mirror technology (because that is risky and costly), but the smartest and cheapest in the world. Using commercially available plastic films, HELIOVIS developed an innovative inflatable and lightweight collector named HELIOtube. It is a collector with 220m in length, 9m in diameter, and a world-record homogenous mirror of 1,600m2 (8m width and 200m length). 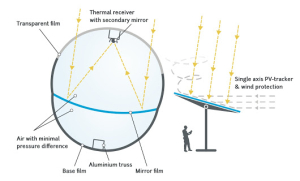 HELIOVIS is a privately owned stock company founded in 2009 by the Austrian inventor Johannes Hoefler and the Swiss experimental and quantum physicist Felix Tiefenbacher with its headquarters in Austria (European Union). In the last seven years the company developed this proprietary HELIOtube technology and built a professional team of 25 international specialists. At present, HELIOVIS is active in the Middle East, North Africa, Europe, US, and Australia. Considering the potential and the drive of the relatively new but massive Chinese CSP market, HELIOVIS and its shareholders decided to actively expand its business on a fast track.

“In fact, both conventional parabolic trough collectors and the HELIOtube are designed around the same principles. The only but essential difference is that the latter uses recyclable plastic films as a raw material to replace fragile glass. This is the key to significantly reduce costs in all stages of the value chain. Due to the flexible production process, simple logistics, low cost and very high modularity fully flexible CSP-solutions can be tailored to the customers’ needs − be it for smaller scale (industrial heat) or utility-scale (electricity) applications.

Whether it is creating local content by building production facilities locally or producing HELIOtubes in another country, whether it is 4 MWth of heat for e.g. water treatment in remote areas or 200 MWel with an 8h-thermal storage − everything is now possible in CSP with the HELIOtube,” Mr. Neng Fan, HELIOVIS’ General Manager in China, said in an interview with CSPPLAZA.

The inflatable HELIOtube has a cylindrical shape. The cylinder is divided by a mirror film into two air-tight chambers running lengthwise through the tube. Small air pressure differences between the top and bottom chambers arch the mirror film downward. Thus a mirror channel is created that concentrates the incident solar radiation on a focus line in the upper chamber (see Figure 1).

Figure 1: How the HELIOtube works

Mr. Fan further explained that, “the HELIOtubes’ advantages will reduce CAPEX for the solar field by 55% when compared to the most advanced conventional trough collectors and can effectively further reduce the solar carbon dioxide footprint over the entire lifecycle of the solar field.” These collectors will be manufactured from roll-to-roll and in large quantities from commercially available, recyclable plastic films (instead of the current glass-based technologies). Every rolled-up and unbreakable HELIOtube can be shipped in a standard 40 feet sea freight container even to remote areas. On site, all people need to do is inflate the HELIOtubes instead of going through assembling and aligning glass mirror after glass mirror which is very time consuming, costly, and prone to mistakes.

Among a numerous operational advantages, Mr. Fan particularly emphasized that the amount of fresh water for cleaning the transparent film is reduced by 80% and preplaced by compressed air.”

The Secret of the Film

Can plastic films be applied to solar thermal power plants? Many people tend to question whether the plastic films could adapt to Northwest China where irradiation resources are very rich but with frequent sandstorms and a harsh natural environment.

“Whenever we discussed our technology with stakeholders in China, they also raised this issue ” Mr. Fan said, “First, what we use for the HELIOtube are long-proven plastic films: a robust bottom film, a high-performance mirror film, and an inert transparent film. All films are used in tough industrial applications for decades. The transparent film, for instance, has been used in the National Aquatics Center Water Cube built for 2008 Beijing Olympic Games or the world-famous Burj al Arab-Hotel in Dubai.”

Second, according to Mr. Fan, harming sandstorms occur frequently in the areas where HELIOtubes will be installed. Conventional wind protection fences are placed around the entire plant but as well as between every second row of the HELIOtubes. The combination of the aerodynamic shape of the HELIOtubes, the well-placed wind fences, and the protective stall positions with turns of up to 340° creates a very smart and highly effective wind protection system with cheap conventional materials.

“In addition, instead of a fence-based system, a unique and fully adaptive wind protection system made of PV-trackers can be installed optionally. This is another aspect where HELIOVIS is pioneering. The smart integration of CSP and PV into a single solar hybrid system can generate both heat and electricity and – equipped with thermal storage – providing energy when and in what form it is needed. These hybrid power plants (see Figure 2) – essentially feasible due to the aerodynamic shape of the HELIOtube − can further enhance the way solar power plants provide clean energy.” Fan said.

The first industrial application will be completed soon

To promote this innovative technology, HELIOVIS built and operated two pioneer systems in Spain and Austria in 2013 and 2014. The scales were 80 meters and 60 meters.

By fall 2016, HELIOVIS builds the first industrial application with the marketable full size of 220m length, 9m diameter, and 8m mirror width for an agricultural company in Spain. HELIOVIS stood out from 2,000 competitors and was awarded a significant and very prestigious EU Horizon 2020 grant.

“This project really means a lot to us because it is the first industrial application of our technology. Even more importantly, the results of this project will directly affect how this innovative technology will be perceived and recognized by the industry, government agencies, and the public. We shall be very pleased to demonstrate the plant to potential partners from China,” Mr. Fan said to the journalist.

Flexible applications both for generating industrial heat and utilities

HELIOVIS sets itself apart from other players in the solar technology field by taking on a different approach. This new approach is characterized by the high scalability, modularity, and transportability of the HELIOtube concentrators. While the majority of solar thermal technologies focus on the generation of electricity, HELIOVIS also operates in the segment of thermal energy generation in which CSP has not yet been applied.

Smaller-scale turnkey plants for heat generation (2 MWth to 50 MWth) for a variety of industrial customers represent an attractive market and have not yet been addressed by CSP suppliers due to far too high costs and little scalability of conventional CSP technologies. The second market segment is to provide large-scale solar fields (20 MWel to ≥200 MWel) for the generation of electricity.

HELIOVIS plans to build the first hybrid commercial plant with 8h-thermal storage for an industrial customer in the global sunbelt. Currently, all preparatory work has been finished and will break ground soon after the completion of the project in Spain.

“Without a doubt, China is a market of great potential, and we hope to find some suitable business partners to bring HELIOVIS’s advanced technology to the country. “Regarding China FIT policy, it is completely fine for us to accept an electricity price of 1.1 yuan/kWh. Our calculation is based on the data from Europe. Once the installed capacity in China reaches significant levels and we can fully exploit the massive scale economies feasible with our technology, we are convinced that we will see a tremendous decline in cost, and once the entire HELIOVIS technology is set up in China, the LCOE shall further drop to unknown CSP-levels…” added Mr. Fan, “with the final FiT policy having been released with 1.15 yuan /kWh, it couldn’t be better for us to enter China’s blooming market now.”