The Redstone project is a 100 megawatt (MW) clean energy facility that will be connected to the South African national grid. Using SolarReserve’s cutting-edge CSP technology, Redstone’s molten salt storage capability will deliver consistent baseload electricity, even after the sun sets. This is a critical development in a country where frequent power outages have been cited as an obstacle to economic growth.

OPIC support to the Redstone project is also a significant milestone for President Obama’s Power Africa initiative, of which OPIC is a key contributor. Power Africa aims to bring new power access to the more than 600 million sub-Saharan Africans currently living without energy access.

«The development of the Redstone project will benefit the South African people, the international clean energy sector, and the role of U.S. leadership in emerging market development,» said Elizabeth Littlefield, OPIC’s President and CEO. «It’s impressive that Redstone brings together the innovative U.S. private sector leadership and technology of SolarReserve, the international experience of ACWA, and large-scale catalytic financing from OPIC. This sort of change-making partnership is at the heart of President Obama’s Power Africa initiative and creates broad, lasting impact in international development.»

«The Redstone project marks an important technology advancement for Africa in clean, renewable power, and a demonstration of U.S. developed technology that is leading the world in large scale solar energy storage,» said SolarReserve’s CEO Kevin Smith. «In addition, the project’s delivered electricity price is the lowest of any CSP project in the country to date,» Smith added. «We appreciate OPIC’s support and look forward to working with our partner ACWA Power and the communities where the project is located to help South Africa at a time when it critically needs new generation to support growth of its economy.»

«The Redstone CSP Project, ACWA Power ‘s 2nd project in South Africa, delivers dispatchable power at the most competitive tariff offered in its Renewable Energy Independent Power Producer Procurement Programme (REIPPPP) program to date for CSP technology, while maximizing value retention in not only the South African economy, but also within the local economy in the project vicinity. Quite apart from the socio-economic contribution this project will make to South Africa, the first time deployment of CSP Tower technology in the country using a project finance framework, which was made possible by the galvanizing leadership of OPIC financing, will enable this very important clean energy technology to be deployed at scale and at a faster pace than otherwise would have been possible,» said Paddy Padmanathan, President and CEO of ACWA Power .

«We are excited about the progress forged by OPIC and these private sector leaders on the Redstone project,» said Patrick Gaspard, U.S. Ambassador to South Africa. «It’s a priority for South Africa and regional neighbors to diversify their power production beyond traditional energy sources, including a greater share of renewables, efficiency improvements, and energy storage capabilities. The U.S. stands by South Africa as a partner, and working together with agencies like OPIC and great U.S. companies like SolarReserve, we can increase sustainable access to electricity, a foundation linked to overall lasting economic growth.»

OPIC’s financing to the Redstone project helps fulfill both the U.S. commitment to clean energy in the developing world as well as South Africa’s own goals through their Renewable Energy Independent Power Producer Procurement Programme (REIPPPP), which aims to add 3,725 MW of clean power to South Africa’s energy generation mix. 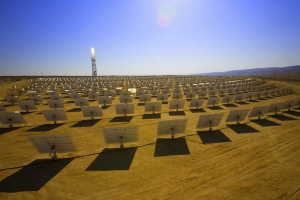 OPIC is the U.S. Government’s development finance institution. It mobilizes private capital to help address critical development challenges and in doing so, advances U.S. foreign policy and national security priorities. Because OPIC works with the U.S. private sector, it helps U.S. businesses gain footholds in emerging markets, catalyzing revenues, jobs and growth opportunities both at home and abroad. OPIC achieves its mission by providing investors with financing, political risk insurance, and support for private equity investment funds, when commercial funding cannot be obtained elsewhere. Established as an agency of the U.S. Government in 1971, OPIC operates on a self-sustaining basis at no net cost to American taxpayers.

All OPIC projects adhere to high environmental and social standards and respect human rights, including worker’s rights. By mandating high standards, OPIC helps raise the industry and regional standards of the countries in which its projects operate. OPIC services are available for new and expanding business enterprises in more than 160 countries worldwide.

SolarReserve is a leading global developer of utility-scale solar power projects, which include electricity generation by solar thermal energy and photovoltaic panels. The company currently has more than $1.8 billion of projects in construction and operation worldwide, with development and long-term power contracts for 482 megawatts (MW) of solar projects representing $2.8 billion of project capital. In addition, SolarReserve has commercialized a proprietary advanced solar thermal technology with integrated energy storage that solves the intermittency issues experienced with other renewable energy sources. This proven US-developed technology generates renewable baseload and dispatchable power and can compete with traditional fossil-fired and nuclear electricity generation.

Since the company’s formation in early 2008, SolarReserve’s experienced team has assembled an extensive global development pipeline of 6.6 gigawatts (GW) across the world’s most attractive, high growth renewable energy markets. SolarReserve is headquartered in Santa Monica, California, and maintains a global presence with seven international offices strategically located in Africa, the Americas, the Asia-Pacific region, the Middle East, and Europe to support its widespread project development activities across more than 20 countries.

ACWA Power is a developer, investor, co-owner and operator of a portfolio of power generation and desalinated water production plants. Based in Riyadh, Saudi Arabia with presence in 12 countries including in the Middle East and North Africa, Southern Africa and South East Asia regions. ACWA Power ‘s portfolio, with an investment value in excess of USD 26 billion, can generate 16.9 GW of power and produce 2.5 million m3 /day of desalinated water to be delivered on a bulk basis to state utilities and industrial majors on long term off-take contracts under Public-Private-Partnership, Concession and Utility Services Outsourcing models.

ACWA Power , registered and head-quartered in the Kingdom of Saudi Arabia, is owned by eight Saudi conglomerates, Sanabil Direct Investment Company (owned by the Public Investment Fund of Saudi Arabia), the Saudi Public Pensions Agency and the International Finance Corporation (a member of the World Bank Group).

ACWA Power pursues a mission to reliably deliver electricity and desalinated water at the lowest possible cost while seeking to maximize the social and economic development of the communities and countries it invests in and serves.