One of the biggest issues facing renewable energy has been generating power during periods of unfavourable weather or time of day. On a windless night, for instance, neither solar panels nor wind turbines can produce energy.

This is where solar power towers shine. They capture the sun’s energy during the day and store it to be used after sundown.

If you’ve ever used a magnifying glass on a sunny day, you might have noticed that if you place it at just the right angle and distance from an object, it focuses light into an intense point. 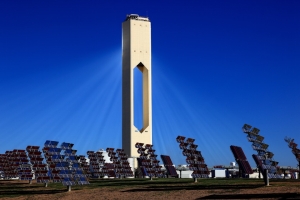 Planta Solar 10 is the world’s first commercial concentrating solar power tower operating near Seville in Andalusia, Spain. So how does it work?
Bildagentur-online / UIG / Getty Images

This is essentially how a solar tower collects heat.

Thousands of moveable mirrors called heliostats on the ground are angled to reflect sunlight to a central receiver at the top of the tower.

That concentrated heat can turn water into steam to power a turbine – or, in newer models, be stored in a “hot tank” full of molten sodium or salts (such as a mix of potassium nitrate and sodium nitrate) sitting around 550 °C.

These substances have a high thermal capacity, meaning they need loads of heat energy to increase temperature. In effect, they can stay molten for hours in an insulated tank and provide heat storage capabilities on which solar power towers rely.

Water piped through the hot tank of molten sodium or salts quickly turns to steam. This is used to power a turbine and crank out electricity throughout the night.

Of course, the sodium and salts lose heat as steam is generated. If they cool too much, they solidify.

So to prevent the system clogging, the cooling fluids are pumped to a «cool tank» where natural gas kicks in to keep them above melting temperature.

And when the sun rises again and the heliostats line up, those fluids are pumped from the cool tank to the receiver where they are heated and stored in the hot tank again.

The cycle of heating and cooling can go on indefinitely – as long as the sun is mostly shining. While this system is certainly an improvement on other systems that convert heat directly to steam without the salt storage, it does not totally overcome the reliance on consistent sunlight.

This is why solar towers are built at locations that experience mostly sunny days year-round, such as the Mojave Desert in the US and Andalusia in Spain.