Normally, solar cannot deliver power after dark, but the big advantage of solar thermal electricity is that it can be stored and delivered later, for solar that can be delivered at any time it’s needed.

Solar thermal electricity is dispatchable, and can compete against the other dispatchable electricity: natural gas. (Coal and nuclear are not easily dispatched on demand, which is why they are in trouble as the grid needs less base load power and more dispatchable power to fill in between intermittent renewables.)

South Australia has an energy crisis, with the highest prices in the world for peak power after dark. Its evening peak is currently covered by dispatchable natural gas, and never under $100 MWh, but it can be almost unbelievably expensive.

“In Australia our price cap is $14,000 per megawatt hour. It can actually go up to that high,” said Danny Price, Managing Director at Frontier Economics. “It is the most volatile market on earth; at peak the price can go from $100 to $14,000 and back again in 5 minutes. So it doesn’t take much to benefit consumers to put some more capacity in at peak times.”

“The goal was to protect Australian consumers from high prices due to this expensive evening peak. The original aim of the government’s policy was to use its own load to encourage more competition, because there is a lack of competition in the South Australia generation market,” said Price. “But the government can’t go round and just bust up these businesses. We don’t have those kinds of laws in Australia, so there is very limited opportunity to make this market more competitive.”

So the goal was to use the dispatchability of a thermal solar project to get the evening peak prices down. And the contract was designed to make that possible in a clever way. Unlike the 20-year contracts that renewable projects typically sign with off-takers in other countries, Australia has a merchant market like Texas, with just 5-year contracts. Even renewables typically are built on spec and must just take their chances selling into a merchant market.

Instead, Frontier Economics designed a long term hybrid contract under which for 20 years SolarReserve delivers its power to Australia’s National Electricity Market (NEM) at $78 MWh and the South Australian Government then extracts it from NEM at no more than $78 MWh, during the day. Then after dark, SolarReserve could sell some of its stored solar to any buyer in the NEM, offering a cheaper alternative during peak pricing periods.

So, though it’s within a merchant market, it would be more like a typical renewable PPA in other countries, with a guaranteed 20 year contract, providing security for both sides: amortizing SolarReserve’s costs, while guaranteeing stable pricing to the South Australian Government. “It is a blend of a capacity purchase agreement and a financial hedge, like a derivative,” Price explained.

SolarReserve provides a guarantee that ensures the South Australian Government will never pay more than $78/MWh over those 20 years, regardless of market price. “Daytime market prices can go over $78 with no big effect on us. We will still provide the South Australian Government with their price and make it up on the differential to evening prices,” commented SolarReserve CEO Kevin Smith in an email.

With plenty of cheap PV and wind in the $80-$85 range on NEM during the day, that is not a huge risk.

Here’s why solar thermal with storage cuts the peak pricing:

Unlike with natural gas, a solar thermal power plant will always have an incentive to push its generation during every evening peak price period rather than withdrawing it to raise prices. That is because solar thermal power is stored in huge tanks of molten salts until it gets used to generate electricity (how CSP thermal energy storage works). The tanks that hold this storage must be emptied out by the next day to receive and store the next days energy, so the storage really has to be utilized within a day.

“Because SolarReserve doesn’t have an infinite amount of energy, they are going to try and make as much money as they can by putting that power into the peak times. Unlike a gas power plant, withholding stored solar thermal makes no sense. We wanted somebody to have an interest in driving down peak prices,” Price explained. 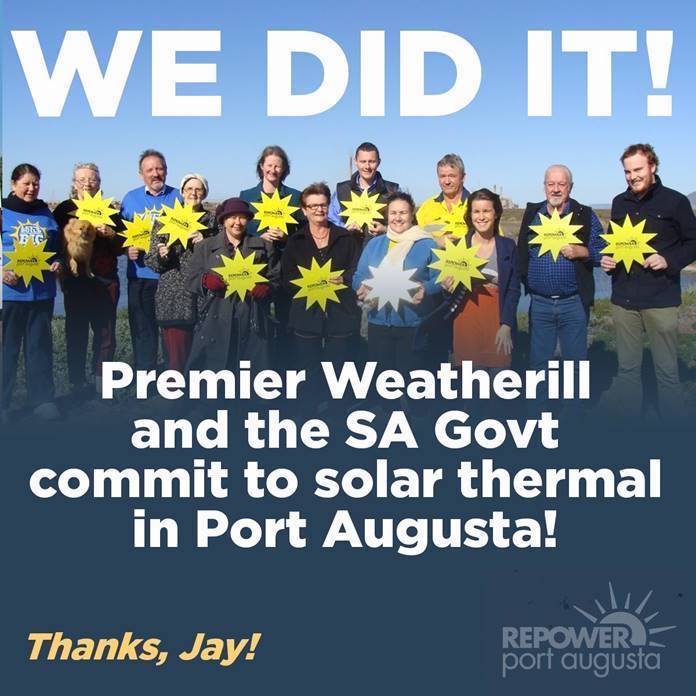 The South Australian Government’s 150 megawatt daytime load peaks at about 1PM. If Premier Jay Weatherill had merely wanted to cover the government’s own daytime load, PV would be an option. But simply adding a lot more intermittent renewables would just make the peak price problem worse, Price said. The overall peak load is around 7PM; after government offices close.

A quarter of South Australian homes have already defected from the grid with their own rooftop solar, leaving too little of the remaining load to make financial sense to build dispatchable generation. The result is scarce and expensive peak generation after dark.

But although the South Australian Government can’t directly lower peak power prices, it can use its load to underpin the development of a new competitor to the market with a different incentive than natural gas generators.

Why electricity is so expensive in Australia:

There are several reasons why Australian electricity prices are so high, but they amount to a lack of government policies protecting consumers.

The energy analyst Bruce Robertson of the Institute for Energy Economics and Financial Analysis, put it bluntly last month. “The Australian gas cartel is restricting supply to the domestic market in order to force up the price,” he told an Australian newspaper.

“Over the last ten years when they developed the East Coast terminal, that immediately internationalized our gas price,” said Price. “That drove up prices quite dramatically.”

In addition, he said, polarization between the political left and right has paralyzed energy investment. Australia’s on-again-off-again carbon price meant investment decisions were put off. “People have been shutting down power stations and not replacing them with any new power stations. And so we’ve now got a shortage of supply.”

Stephen King, Professor of Economics at Monash University in Melbourne, Australia, the author of Unlocking the Infrastructure: The Reform of Public Utilities in Australia, added policy failures associated with Australia’s rapid adoption of rooftop solar. As more households used less network electricity, he said, electricity retailers were allowed to recoup their sunk costs by increasing their prices – which incentivized even more households to defect for cheaper solar.

“People looked at their network power prices and were not very happy about the rate of increase,” King said. “The power price goes up, so more people choose alternative power sources, but that reduces demand even further, so the prices go up again.”

Innovative ideas like the Port Augusta hybrid contract correct these policy failures. The way the contract was set up helped make the cheapest solar thermal power

The Aurora contract, with a set price guaranteed over 20 years, helps it keep its price down, so it can bring down prices at the evening peak in turn. 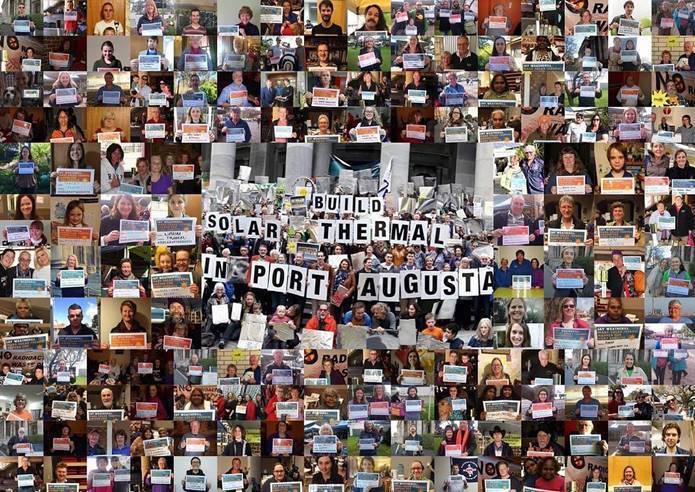 In addition, the federal government promised Port Augusta $110 million in concessional finance for “solar thermal electricity in Port Augusta” through ARENA (in return for a local politician’s vote to allow tax cuts favored by the political right). The idea was to replace lost jobs in Port Augusta’s previously coal-powered but heavily polluting economy.

The equity loan would be at about 3%, representing extremely cheap financing in Australia, according to Price. But there is some concern locally that the federal government might instead dilute the fund; dividing it between a number of smaller storage projects instead of the huge Aurora project with its 1,100 megawatt hours of solar thermal energy storage capacity.

However, SolarReserve said that their price would actually not be that much higher if the federal government does renege, because it is for only $110 million of the total $650 million cost of the project. SolarReserve is oversubscribed with finance available for the remainder.

And although the low price is a record for a solar thermal electricity contract, it is actually not a record low bid for the company. SolarReserve is obliged by the way its financing is structured to ensure that all its bids are financially sound, and in 2016, the firm was comfortable bidding its Chilean Copiapo project for round-the-clock solar in an open auction at just $63/MWh (USD).

So at $61 USD, Aurora is in the range of SolarReserve’s $63 bid one year earlier. Both are the world record low prices.