You wanted to know how SolarReserve managed to bid US$63MWh for a CSP tower project with thermal storage and here are the answers. Don´t worry, they didn´t forget to budget for the construction of the tower when they made their calculations.

And nope, they didn´t have a silver bullet that got them there instantly either.  Instead, their success was down to their relentless commitment of improving efficiencies and small cost savings across the whole project, combined with a fertile ground for CSP in Chile. As they say, every little helps! 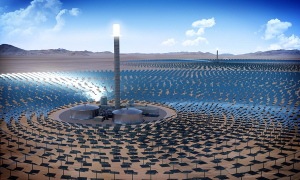 The most important detail about the SolarReserve bid is the structure of the projects associated with it. They proposed two different projects, both with the same US$63MWh bid:

The Atacama desert is a really privileged location for CSP. Because of its altitude and clear sky the Direct Normal Irradiation (DNI) has been reported to be as high as 3800KWh/m2/year. It is the very best resource in the world, and this does make a considerable difference when it comes to the numbers.

Both projects feature SolarReserve’s next generation of solar thermal technology. This advances are derived from technological advances and increased efficiencies learned from lessons learned from Crescent Dunes – SolarReserve´s project in the US – which is in commercial operation. Their next generation, larger molten salt receiver with a higher thermal rating and their larger heliostat field results in a larger amount of storage; which reduces cost and takes advantage of the higher solar irradiance.

SolarReserve has reduced the capital cost from Crescent Dunes, its first project, by close to 30% for Redstone, it´s second plant in South Africa, which is about to achieve financial close. Additional cost reductions and efficiency improvements are incorporated into Copiapó and Likana.

One of the questions that I got most often was whether the set-up included a hybrid CSP/PV solar field. Although both projects are permitted to incorporate PV into a hybrid configuration, the conventional thermal power plant equivalent CSP capacity factors for both plants does not necessitate PV augmentation. Therefore, PV was NOT considered in the calculation when bidding.

It is no mystery that anything can be achieved in a tender if it is written properly with a clear objective. Even when we try our best to compare like for like – for example in low costs achieved in tenders – most often we are really just comparing apples with oranges. The lesson here is that sometimes a number is just a number.

In terms of energy Chile is as open and unregulated as it gets. This means that the energy industry is a ‘free’ market. As the country imports upwards of 90% of their energy, the government did introduce a renewable energy target to stimulate its growth whilst onshoring some energy production for strategic reasons.

Energy demand in Chile is flat 24/7, because a great deal of energy produced is consumed by mining companies. Therefore, most of the energy tenders require you supply energy 24/7 – although in the last years some smaller limited hour tenders have been introduced to give renewable an edge.

When a new energy project in Chile gets commissioned it usually doesn´t obtain a long term PPA as we are used to in other parts of the world. In fact, the government tenders every 5 to 10 years the power that they foresee the country is going to need in a few years. In this particular case, Chile was tendering the energy that they foresee they are going to need in 2023. This means any energy generator – whether the project has been built and paid back, recently built and still being amortised or a new build. In fact, you don´t even need to generate energy. You could simply buy from the SPOT market and sell it at the price you´ve earned in the tender.

This is the key to explain why SolarReserve didn´t win despite of the low bid – they were competing with projects that have been built – and even amortized – for years. They were also competing with new proposed power plants.

There are other factors that help the number get down, besides DNI and increased efficiency. The PPAs in Chile are denominated in US dollars which helps alleviate the financing constrictions. Also, Chile enjoys a very competitive EPC process and favorable capital structure.

Furthermore, supply costs were optimized using Chile’s well-developed local industry for many of the components. All the key materials can be purchased locally, especially salts, which are produced in the Atacama region allowing the company to avoid reduce significantly logistics costs.

As the tender was set up to start generating electricity in 2023, learning curve also played a role. SolarReserve believes that CSP with storage is set to realise falling installation costs as global deployment accelerates. CSP is a relatively young technology, with a strong roadmap for performance improvements, optimization and cost reduction. As more projects deploy in China, MENA and South Africa the learning curve will push costs down considerably.

The fact that they didn´t win the bid despite of the low cost hasn´t put SolarReserve off. They plan to re-bid the same projects for the next tender scheduled for December 2016.

They believe that, because a large amount of energy was awarded to intermittent sources of energy in the last tender, the tender in December will include capacity requirements to ensure that the energy offered is from a baseload plant.

I will be watching closely SolarReserve and the development across all the CSP markets, so watch out for updates 🙂 Any questions, comments or feedback… don´t be shy and get in touch!

I´d like to thank Tom Georgis, José Lobo and Mary Grikas of SolarReserve for their help with this piece and the ongoing support they provide me with.