The Cerro Dominador plant is a tower design with 17.5 hours of molten salt thermal storage capacity. Abengoa is acting as technology partner for the engineering and construction project. The plant will be joined with an operational 100 MW PV plant to form a 210 MW hybrid solar energy complex. 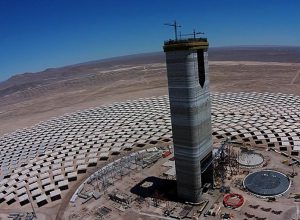 Hybrid CSP-PV concepts could lower the levelised cost of energy (LCOE) to around 40 to 80 euros/MWh ($45.5-$91.1/MWh), depending on site and local market conditions, Oliver Baudson, managing director at TSK-Flagsol, said.

“In terms of levelized cost of energy, we assume for CSP-PV hybrid improvements of up to 50% compared to CSP stand-alone,” Baudson said.

The integration of CSP and PV technology helps to lower construction and operations costs on a per MWh basis.

«In tower projects there may also be some savings in the receiver as it may be smaller,” she said.

Hybrid projects also bring about efficiencies in terms of logistics and labor costs, in both construction and operations phases.

Operational costs can be optimized through integrated operations and maintenance (O&M) contracts for the CSP and PV plants, Trujillo noted.

«The labor can be shared, while only one warehouse, workshop and administration building will be required,” she said.

The cost of standalone CSP and hybrid plants will continue to fall as growing deployment experience reduces contingencies during the construction period, Gonzalez said.

«And as more plants are built, the availability of financing options increases, reducing the overall cost of capital and allowing for the projects to become more competitive,» he said. Morocco has set a target of 52% of installed capacity from renewables by 2030 and has launched a request for proposals for two hybrid solar plants at Noor Midelt. The two plants will each have a gross CSP capacity of between 150 MW and 190 MW and include storage capacity. The plants will be built by different developers and technology can be parabolic trough or tower while the exact PV capacity must be defined by the bidder.

According to Trujillo, the markets most suited to hybrid CSP-PV are those with peak demand after sunset and sufficient daytime demand to absorb the PV generation.

This point was underlined by Meryem Lakhssassi, Sustainable Development Officer at the Moroccan Agency for Sustainable Energy (Masen), when she gave an update on the Noor Midelt project in April.

Larger hybrid projects can gain from economies of scale and wider deployment of hybrid plants should generate further design efficiencies.

“Over time, standardized methods will get established… it can be expected that a degree of efficiency saving in the design phase, as well as later on in the testing and operating phases, will become evident,” Trujillo said.

Morocco has kept in place a CSP regulatory framework in which Masen assumes many development and financial risks. This framework allows developers to focus on optimizing project costs and should result in a lower tariff for Noor Midelt than on previous stand-alone CSP projects, Lakhssassi said.