Researchers at the University of Houston have designed a device that efficiently captures solar energy and stores it for use by applications for the internet of things (IoT) and industrial IoT. Unlike solar panels and solar cells, which use photovoltaic technology for direct electricity generation, the hybrid device leverages the physics of molecular energy and the accumulation of latent heat to make the collection and storage of energy a 24/7 process, addressing a primary shortcoming of current solar products. 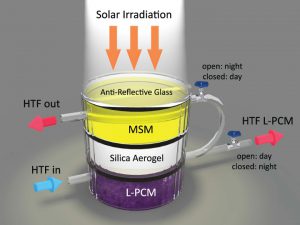 The researchers synthesized the device using norbornadiene-quadricyclane (NBD–QC), an organic compound with high specific energy and extended storage times, as the molecular storage material (MSM), separated from a localized phase-change material (L-PCM) by a silica aerogel to maintain the necessary difference in working temperature.

The common approach for storing solar energy is the use of batteries coupled with photovoltaic systems for both small- and large-scale installations. It is not only electricity that needs to be stored: An equally useful aspect of energy transition is the ability to capture and store solar thermal energy. That goal is not so easy to achieve, however, especially if you need a system that can preserve heat for long periods.

The challenge has spurred a new line of research in recent years that is devoted to the creation of solar storage on demand. The critical point of these systems remains efficiency. The Houston researchers’ development could thus drive decisive change in the thermal-battery sector.

Efficient harvesting and storage of solar thermal energy are essential to exploiting the abundant solar radiation that reaches Earth’s surface. Today’s systems use expensive materials with a high optical concentration, which leads to high heat losses.

The new device is based on a hybrid paradigm that uses daytime heat localization to provide 73% collection efficiency on a small scale and ∼90% on a large scale. In particular, at night, the energy stored by the hybrid system is recovered with 80% efficiency and at a higher temperature than during the day, setting it apart from other state-of-the-art systems, according to a paper published by the researchers in the December issue of Joule.

Classic silicon photovoltaic systems are considered a mature technology that is approaching its theoretical performance limits, though incremental improvements are still being made. At the moment, there is interest in double-sided panels, which take energy not only from the sun but also indirectly from the albedo — the light reflected by rocks, asphalt, or other surfaces.

A lingering disadvantage of renewable sources such as solar- and wind-based power, however, is their intermittency, which requires the use of batteries to store the generated electricity safely and economically so that it is available for use when needed. The University of Houston researchers say their approach could remove a roadblock to the large-scale adoption of solar energy by enabling 24/7 use of solar power in all seasons and under all weather conditions.

“The high-efficiency harvest is due, in part, to the ability of the device to capture the full spectrum of sunlight, harvesting it for immediate use and converting the excess into molecular energy storage,” said Hadi Ghasemi, Bill D. Cook Associate Professor of Mechanical Engineering at the university and a corresponding author of the paper.

The integrated system also reduces thermal losses because there is no need to transport stored energy through long pipelines.

Technologies to store solar energy at low cost and high efficiency are a critical focus in light of the other developments that are coming to the fore to enable energy security and cope with climate change.

Artificial intelligence, for example, can regulate and optimize flows in smart-grid applications to compensate for solar- and wind-power intermittency and minimize the need to compensate for grid imbalances with thermoelectric power plants.