Not too long ago, the mention of hydrogen, or concentrating solar power, or both at the same time, would be met by a roll of the eye from alternative energy insiders. Hydrogen is an abundant and clean-burning fuel, but the primary source of hydrogen is natural gas. Concentrating solar power has a built-in energy storage element, but it is more complicated and expensive than other solar technologies. Et cetera, et cetera, and so on and so forth. 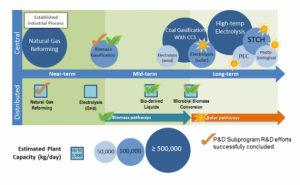 Nevertheless, it looks like hydrogen and concentrating solar power are destined to play their parts in the sparkling green future. In a twist of fate — or science — they could also help each other ramp the low carbon economy up to the next level.

The Road To Sustainable Hydrogen

Hydrogen is commonly used in petroleum refining, metallurgy, fertilizer production and even food processing (think hydrogen peroxide and you’re on the right track).

In terms of energy, the interesting thing is that it can be used directly as a combustible fuel, and it can also be used in a chemical reaction, to generate electricity in a fuel cell.

Any way you cut it, the devil is in the supply chain because the main source is natural gas. Here’s a rundown on US hydrogen production from the Department of Energy:

Synthesis gas, a mixture of hydrogen, carbon monoxide, and a small amount of carbon dioxide, is created by reacting natural gas with high-temperature steam. The carbon monoxide is reacted with water to produce additional hydrogen. This method is the cheapest, most efficient, and most common. Natural gas reforming using steam accounts for the majority of hydrogen produced in the United States annually.

Synthesis gas can also be produced from coal. Considering the abundant coal resources of the US, it’s not surprising that the Energy Department supports coal-to-hydrogen R&D. However, despite President* Trump’s serially repeated pledge to bring coal jobs back, the Energy Department seems to be hedging its bets.

The Energy Department currently envisions the technology within an integrated system that also involves power production and carbon capture and storage with a recycling/reuse component, with the aim of curtailing the release of greenhouse gases and other pollutants.

Talk about expensive and complicated!

There are a number of different approaches to water splitting, including some that deploy microbial digestion and photochemical reactions. A more common method is to apply an electrical current. Before the advent of renewable energy, that would have required a large input of conventional fuel, but low cost solar and wind power have changed the game. Here’s the agency enthusing over the potentials:

…If the electricity is produced by renewable sources, such as solar or wind, the resulting hydrogen will be considered renewable as well, and has numerous emissions benefits. Power-to-hydrogen projects are taking off, where excess renewable electricity, when it’s available, is used to make hydrogen through electrolysis.

“Taking off” may be overstating the current level of activity in terms of commercial use, but the number of large scale power-to-hydrogen (aka power-to-gas) research projects is certainly increasing.

With its built-in energy storage element, concentrating solar power could be used 24/7 to generate electricity for simple electrolysis. That’s just one approach, though.

…in solar thermal (heat) energy, thousands of “suns” can be concentrated by mirrors and focused into a solar reactor to produce temperatures up to 1,500°C. There are no carbon emissions when hydrogen is made by a thermochemical reaction splitting water using the heat of a solar reactor.

There is not much water that you need. You’d pump water through and evaporate it and get the steam into the reaction chamber and hydrogen comes out. You’d have a pretty good conversion, but some water left that would be recycled.

Don’t hold your breath for that new solar-enabled thermochemical reactor to show up at your local hardware store. According to Sattler, the research is in the demonstration phase, and the current crop of reactors clocks in at one to five meters. A much larger version would be needed for commercial production:

…For large-scale fuel production we foresee that a solar hydrogen plant will be much bigger, like a 100 MW solar tower. And like today, these large chemical plants will be a bit further away. They need to be protected. Like a refinery it will not be in your backyard.

The advantage over electrolysis is efficiency. According to Sattler, electrolysis only yields a solar conversion efficiency of 12 to 14%. In contrast, some solar-enabled thermochemical water-splitting systems can reach up to 60% or more.

That doesn’t mean electrolysis systems will end up in the dust bin some day. As Sattler notes, even at relatively low efficiency, electrolysis can be commercially viable when it stores excess wind or solar energy in the form of hydrogen.

As for concentrating solar power, despite all the nay-saying of several years ago it looks like the technology is here to stay.

In fact, Trump or no Trump, the Energy Department is pitching concentrating solar power as the baseload replacement for conventional power generation.