Denmark’s ‘energy island’ of Bornholm is to host what is being claimed as “game changing” molten salts-based storage technology that its developer aims to deploy as a future large-scale source of renewable heat and power. 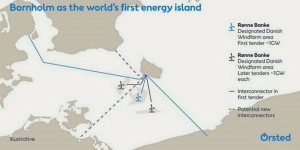 Hyme Energy will deploy its system using molten hydroxide salts at an operating combined heat and power (CHP) plant in Rønne as part of an EU-backed project to demonstrate a clutch of pioneering storage technologies.

Hyme says it is the first to be able to use molten hydroxide salts as a medium for long-duration energy storage (LDES), thanks to technology transferred from its sister company in the nuclear sector that allows their highly corrosive nature to be controlled during high-temperature storage applications.

That opens the way for use of “abundant, non-toxic” materials available as a by-product from seawater and around 10 times cheaper than nitrate salts commonly utilised in other storage systems, according to the Danish company.

The Hyme demonstrator plant, due online in 2024, will have a storage capacity of up to 20MWh, providing heat, power and ancillary services for the grid.

The company’s CEO Ask Løvschall-Jensen told Recharge: “We’re going to deliver steam directly into the biomass plant that’s there today, into the existing turbine system at the quality, consistency and stability required.

“This will be the first validation that we could replace a coal or biomass boiler entirely, replace it with LDES and deliver steam to the same turbine that is already at the site.”

The company sees the Bornholm demonstrator as a key milestone on a route to GWh-scale deployments, potentially linked to large-scale renewable energy sources such as offshore wind and supplying high-temperature heat to major industries.

Løvschall-Jensen said molten hydroxide salts had been “disregarded up to now as a storage medium” due to their corrosive nature, but with that under control they can open the route to compact, highly efficient storage.

“Long duration – 6-8 hours up to 24 hours of discharge and gigawatt hour scale – that’s where we are good.

“The larger we build, the more the strengths of the compact nature of the salt and the cheapness of the storage medium we get. We’ll be large-scale, utility scale, industrial scale.

The natural main target for Hyme is industrial heat customers. “They’re the ones completely reliant on natural gas – for processes above 200°C they simply don’t know what to do yet.

“Our strength is the high temperature of the salt, all the way up to potentially 700°C.”

Løvschall-Jensen said Hyme has already talked to wind and solar developers over future potential links between green power generation and its systems.

The Hyme CEO is also aware of the massive offshore wind developments planned around Bornholm, for which Denmark has massive plans as part of its ‘energy islands’ strategy.

“My dream is that we can help when there is excess offshore wind power, that Hyme can be located close to those. We have flexible charge, storage and discharge. We could ensure that excess wind power is delivered in up to 24 cycles to industry or the grid.”

The Danish company also believes its system and other storage technologies could provide a cost-effective template to retrofit large numbers of fossil plants around the world as they retire the polluting elements of their set-ups, tapping into their sites and grid connections and giving them a new lease of life.