Hyperlight Energy (La Jolla, CA, US) a developer and manufacturer of Concentrating Solar Power (CSP) technology, on August 1st, 2016 announced that it was selected by the U. S. Department of Energy’s SunShot Initiative to receive a USD 1.5 million award to develop a pilot CSP production line in San Diego, CA.
The project will also validate a rapid field deployment design in a one-megawatt (MW) demonstration project at the San Diego State University Center for Sustainable Energy in Brawley, CA.

The National Renewable Energy Lab (NREL) is a partner and sub-recipient on this award.

According to the company Hyperlight’s architecture uses light-weight, recyclable, 30-year outdoor plastics instead of traditional CSP systems’ expensive concrete and steel support structures to focus mirrors on a receiver to produce thermal energy.

Plastic extrusion is a high-volume manufacturing process in which raw plastic is melted and formed into a continuous profile. The extrusion process works around-the-clock, at the rate of several feet per minute – resulting in parts that are quite literally “produced by the mile.” 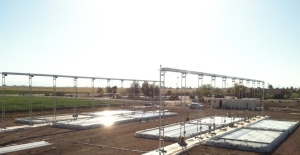 Eliminating onsite manufacturing of concrete and steel, and utilizing Hyperlight’s pre-fabricated, pre-assembled components, this approach promises significant cost reductions in manufacturing and installation. The core enabler of the advancement is the use of high-throughput, high-precision plastic extrusion. Hyperlight Energy’s target is to be the lowest cost CSP collector in the world, the company said.

Demonstration project funded by SoCalGas and the California Energy Commission

The demonstration project will build on the success of a recently completed, two-year project to validate the core technology – plastic extrusions mounted on waterbed foundations – which was funded by Southern California Gas Company (SoCalGas) and the California Energy Commission.

“SoCalGas has a strong track record of support for projects to advance technology that maximizes the benefits and offsets the environmental footprint of natural gas,” said Jeff Reed, director of business strategy and development for SoCalGas.

“We are encouraged by the potential of Hyperlight because it effectively addresses cost issues that have until now held back Concentrated Solar Power (CSP) technology.”

Further, CSP can be coupled to low cost thermal energy storage, which enables the flexibility to boost plant output when the sun goes down. Hyperlight captures these inherent CSP advantages, but uses the lowest cost materials of construction of any CSP product yet deployed, the company emphasizes.

“CSP is poised for a renaissance. CSP has the potential to provide the best fit for large scale energy storage to support the grid during peak demand, even when the sun goes down,” says John D. H. King, Hyperlight Energy’s CEO.

“With geothermal hybridization paired to thermal energy storage, we can provide increased capacity to existing power generating assets, and with solar EOR, we can help meet low carbon fuel standards in a way no other renewable energy technology can. Hyperlight is coming at just the right time, we’re on track to be the low cost leader in both these markets.”