With its heavy reliance on dirty coal-fired power stations, South Africa’s CO2 emissions are among the highest in the world, yet its abundance of sun gives the country world-leading potential for clean, affordable and efficient renewable energy.

In terms of its global commitments to cut greenhouse gas emissions, South Africa is under pressure to halt its dependence on coal-fired power and reduce its national carbon footprint. Even the greenest buildings in South Africa have a sizeable carbon footprint as they usually rely largely on coal-fired power from Eskom for electricity. This fact will remain until South Africa builds up a critical mass of utility-sized renewable energy plants to provide carbon-free energy to the electricity grid. 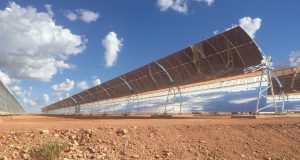 The Northern Cape has some of the best solar resources in the world and presents a stellar opportunity to lower carbon dependency. The Ilanga CSP 1 project, located in Karoshoek about 20km east of Upington, will provide solar-generated thermal electricity both day and night. The 100MW utility is the first phase of a significantly larger envisaged solar park complex. The power station’s thermal storage capacity is five hours, enabling it to yield more than 320GW per year. The project also has a social component, which aims to benefit the surrounding communities.

Pancho Ndebele, founder of Emvelo, the black-owned green resources company that developed the R11billion Ilanga CSP1 project, believes it will help to kick-start the renewable energy industry in the region.

The mega solar park complex, which is an award-winning integrated infrastructure development project located in the Dawid Kruiper municipality, has a planned total footprint of 6000ha. Karoshoek is located in the heart of this 5GW Northern Cape solar corridor that has been identified in the provincial growth and development strategy.

The Emvelo team is participating in the execution of the project as both client and contractor. The facility, which is currently in its construction phase, will be up and running by November 2018.

Ilanga CSP 1 consists of a field with rows of parabolic troughs around six-metres high and several metres long.

The troughs rotate to track the movement of the sun and reflect its heat on to fluid-filled tubes that run through the length of the mirrors. The tubes store the heat.

Despite their large size, these high precision optical devices are aligned with millimetre precision. Many parallel rows of these collectors span across a solar field, covering an area of about 400ha –360 000 curved mirrors, which line the solar collecting troughs, were shipped to Cape Town from Europe and then transported to Upington using 397 trucks.

The solar collectors are currently assembled on-site by trained local residents. On completion the farm will comprise close to 15 000 collectors.

Unlike conventional solar PV plants, CSP thermal energy can be stored, which means electricity generation is not constrained to when the sun is shining. Siyabonga Mbanjwa from engineering design company Sener explains: “CSP with heat energy storage is the only renewable energy technology with the ability to deliver dispatchable electricity. This is one of the most distinct features of this plant.”

This illustration demonstrates how CSP works

The CSP plant will provide electricity to about 80 000 households and displace about 370 000t of CO2 equivalent emissions during every year of operation. The entire project fits into national and regional green economy ambitions, says Ndebele.

Solar thermal technology also supports the creation of more local jobs than other forms of renewable energy, including the local manufacturing of components on a significant scale. Almost half of everything built at Karoshoek is manufactured in South Africa.

CSP technology development is still on a steep learning curve, and the factors that will further reduce costs are policy and market certainty with regards to the future of independent power producers under the current REIPPP or another framework. Technological improvements, mass production, economies of scale, improved operation and maintenance will also play a role.

South Africa’s REIPPP has attracted an investment of R192billion for 92 energy infrastructure projects with a total of 6236MW – with about R53billion of this coming from the seven CSP projects approved to date, with a total of 600MW.

With only 5GW of CSP installed globally, compared to wind at 500GW and solar PV at 250GW, CSP technology is relatively young compared to other energy technologies. “It offers South Africa the opportunity to become a mecca for CSP, given its vast solar resources,” says Ndebele.

Karoshoek is more than just an ambitious solar energy project. It is also an example of how integrated regional planning can generate social upliftment. The Dennis Moss Partnership has been involved in putting together a broader development vision for Karoshoek that fits in with local municipal aims and realities. A key element of Karoshoek’s social development initiative is the upliftment of adjacent rural communities. This includes the potential renewal and restructuring of settlements like Lambrechtsdrift, Karos, Ntsikelelo and Leerkrans in accordance with the local municipality’s Integrated Development Plan and Spatial Development Framework.

In addition to wealth creation via direct investments, the project will help create some 1 800 jobs (skilled and unskilled) during construction. Ilanga CSP 1 will also inject millions of rands annually into socio-economic development projects in the region over the next two decades.

The surrounding townships are providing some of the local labour, and they will also be beneficiaries of the Karoshoek Community Trust.

Besides the solar field, the solar park complex will include various other elements, such as, amongst others dedicated evacuation power lines, a bulk water supply from an abstraction point at the Orange River, a concentrated solar energy academy, accommodation and a housing development.

The goal is to establish a host of CSP power stations that will collectively supply 1GW into the grid by 2030.