In a few weeks, the largest concentrated solar power plant will start producing power in California

In a few weeks, the largest concentrated solar power plant will start producing power in California

In a few weeks, the largest concentrating solar power plant of its kind in the world will start producing power in California’s Mojave Desert.

In a few weeks, the largest concentrating solar power plant of its kind in the world will start producing power in California’s Mojave Desert. The Ivanpah Solar Electric Generating System will supply both Northern and Southern California, inching the state one step closer to its ambitious renewable energy goal. 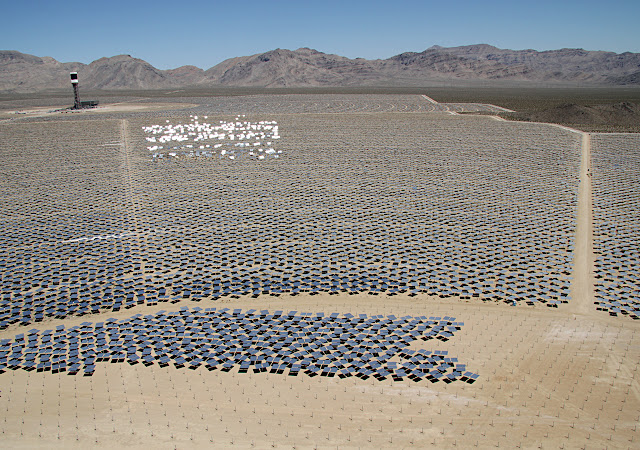 But like many of the large solar energy projects being built in the Mojave, Ivanpah ran into delays and controversy over its environmental impact. Now, in an effort to streamline the process, state officials are trying to broker an agreement between conservation groups and solar companies on a path forward for renewable energy. 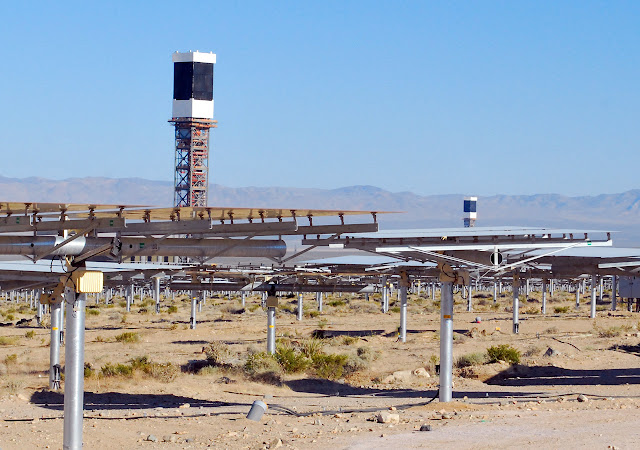 Ivanpah doesn’t use the solar technology most of us think of – those dark, silicon panels sitting on rooftops. The project harnesses the sun’s heat, reflecting off a field of 170,000 mirrors. They shimmer across a dry, dusty valley about five miles away from the California-Nevada state line, surrounding three 400-foot concrete towers. 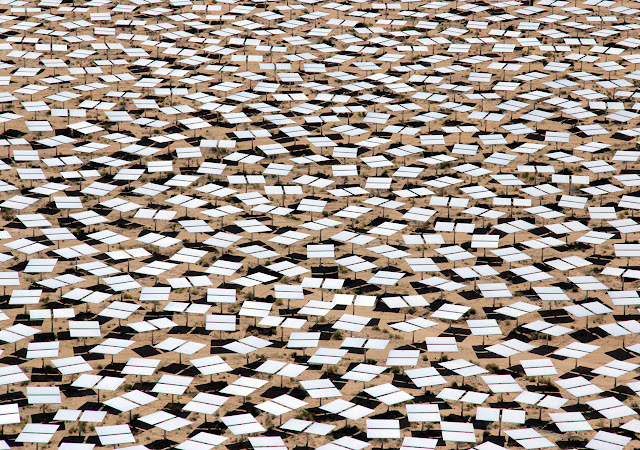 “We can keep the sun’s energy – the rays of the sun – targeted back to the solar tower,” said Dave Beaudoin, construction manager for the $2.2 billion project, originally developed by Oakland-based BrightSource Energy. 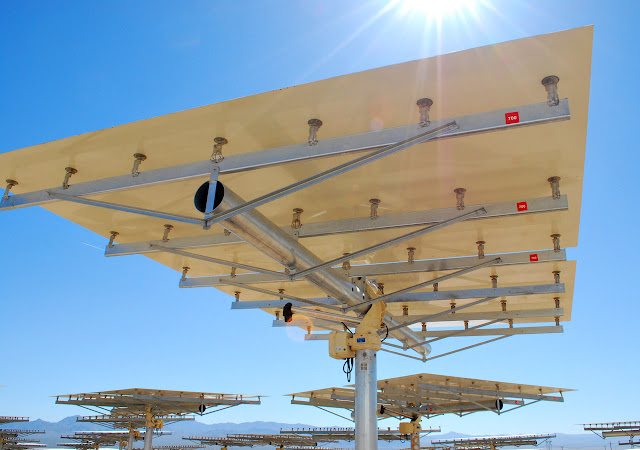 The garage door-sized mirrors focus the heat on giant boilers on top of the towers, where water turns into steam. That steam powers a turbine that generates electricity. 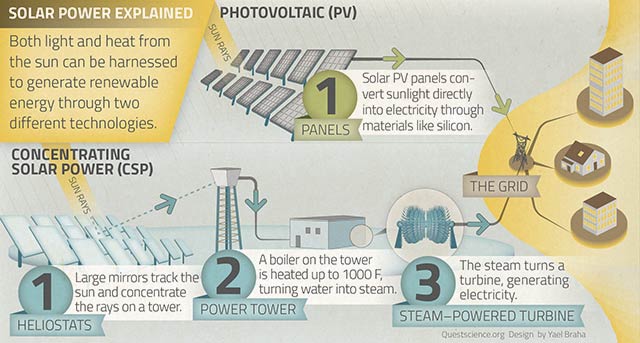 “This is definitely cutting-edge,” Beaudoin said. “It’s nothing I’ve ever done before.”
Ivanpah will supply about 140,000 homes in Pacific Gas & Electric and Southern California Edison territories when it comes fully online by the end of the year. But getting to that finish line has been a rough road for the project.
It took several years to get permits from almost a dozen state, federal and local agencies. The project became political fodder after getting a $1.6 billion federal loan guarantee, like the bankrupt solar company Solyndra. And then there’s the desert tortoise – the controversy that’s made Ivanpah famous.
“I didn’t have gray hairs before this project,” said Doug Davis, senior compliance manager for the project. Davis is looking at large mesh enclosures outside the field of mirrors, what he calls “Tortoise Head Start.”
“The Head Start facility is mainly for the small guys,” Davis said. “Their shells are very soft, so very susceptible to ravens.”
Desert tortoises are a threatened species, so BrightSource relocates the ones found on the construction site. Young tortoises are held until they’re big enough to release. Several dozen adults have been moved offsite and are tracked with radio tags.
BrightSource planned on finding just 35 desert tortoises when the project began, but came up with five times that number. That meant shutting down construction and doing another biological survey. “Almost every foot of our 3,500-acres, approximately, has been covered by a biologist at least ten times,” Davis said.
The relocation program has come at a cost: $55,000 per tortoise. It’s been watched closely by critics like Ileene Anderson of the Center for Biological Diversity, one of the groups concerned over the loss of desert habitat.
“I’m not a big fan of the super-large projects,” she said. Utilities were on the hunt for large renewable energy contracts after California set a goal of getting 33 percent of its electricity from renewable sources by 2020. There was a rush to get big solar farms underway to meet the Department of Energy’s loan guarantee program deadlines. In addition to Ivanpah, six other major solar projects are expected to open in California over the next year. 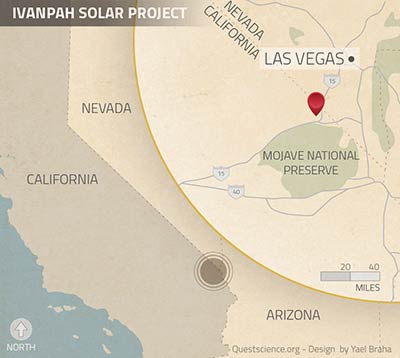 “Many of the projects when they were first proposed and we would see the application, see where the map was, it was like ‘oh no, this is going to be a nightmare project,” said Anderson. “Put it on previously disturbed lands where there’s very few conflicts because the landscape has already been impacted.”
But other environmental groups raised concerns from another perspective: climate change, something that could harm desert wildlife in the long run.
“If you care about desert tortoises, you better care about climate change,” said Carl Zichella of the Natural Resources Defense Council. “Without some large scale renewable energy projects we do not hit our climate goals. We do not replace fossil fuels with clean energy in this country. It just does not happen.”
“Even if we paved the whole California desert with solar plants, it’s not going to save the planet,” Anderson responded.
These differing views sparked a “green vs. green” debate between those who wanted to file lawsuits to stop projects and those who didn’t want to see solar developers driven away.
“I think it has been tough,” Zichella said. “It’s been personally painful. We are very good at stopping things. We aren’t very good at building things.”
In end, with the threat of lawsuits in the air, environmental groups negotiated with BrightSource and other developers to set aside nature preserves in the desert.
In an effort to stem the conflict, California is trying to forge a smoother path for future projects through the Desert Renewable Energy Conservation Plan. The idea is to divvy up the desert into zones suitable for renewable energy development and conservation areas that are off-limits. Solar developers, counties, conservation groups and federal and state agencies are hashing out the comprehensive plan.
Karen Douglas of the California Energy Commission says it’s unusual to see all sides working together. “There is never any perfect consensus,” she said. “But we’ve got an opportunity with this partnership to put in place what we really think of as the ‘greenprint’ that will help us conserve our desert resources not only in the face of development but in the face of climate change.”
“I’m cautiously optimistic,” said Anderson. “Are they covering the right species in the plan and is it implementable? All those things are still to be determined.”
Other Western states have run into similar problems and are watching California’s effort. A full draft of the plan’s environmental review is expected this fall.
Photos: Lauren Sommer, Josh Cassidy, Gabriela Quiros/KQED