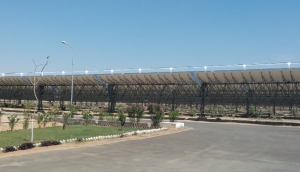 The plant is spread in four hundred acres of land in Thar Desert which have abundant amount of incident solar radiation. The solar field of the plant is built with parabolic trough technology and have aperture area of 3,92,400  square meters. Dowtherm A fluid is being used to absorb solar radiation in the solar field and generate steam in solar steam generator for power production in the plant. The plant is operating during day time as it is not equipped with storage system. The plant can operate round the clock and supply clean power to the Nation to meet its energy demand with installation of thermal energy storage steam.