A total of 470 MW of capacity was bid out. The first large scale concentrated solar power plant of 50 MW was commissioned only recently in the country.

It was the JNNSM that kick started the Concentrated Solar Thermal Power (CSP) program in India. Under the phase 1 (2010-13) of the Mission, 50% of the allotted capacity was earmarked for Concentrating Solar Power (CSP). 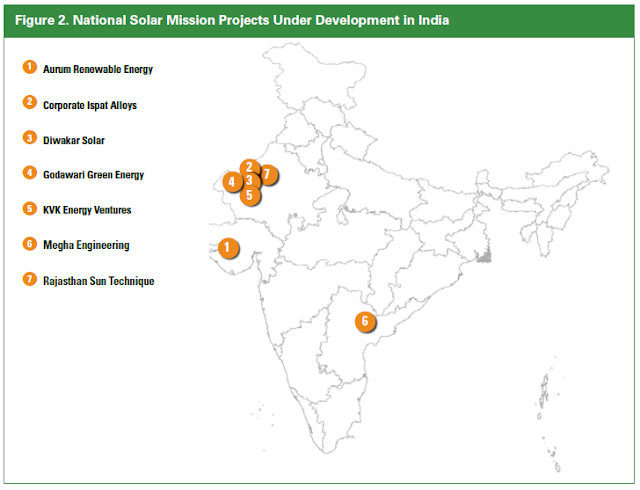 A total of 470 MW of capacity was bid out. The first large scale concentrated solar power plant of 50 MW was commissioned only recently in the country. Phase 2 of the Mission (2013-17) has earmarked roughly 30% of the capacity for CSP. Going beyond the JNNSM, the National Tariff Policy was amended in 2011 to have a separate solar RPO (PV+CSP) for all obligated entities in the country. 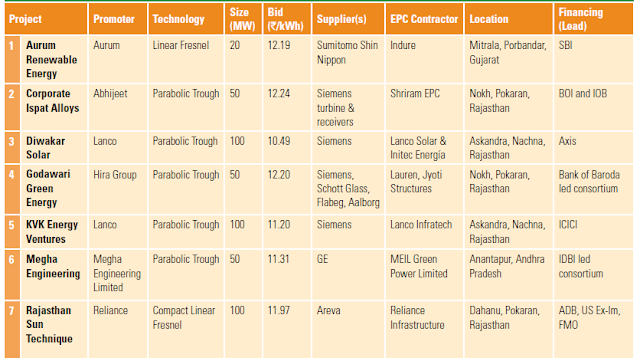 This is expected to begin with 0.25% in 2012 and increase to 3% by 2022. According to MNRE, this translates to a need of roughly 34,000 MW in 2022. Additionally the SECI would be setting up pilot CSP plants to test out various possibilities in India, namely hybrid and storage projects. 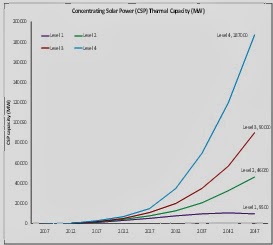 While solar thermal electricity is relatively new in India, given the potential it is expected to gain pace in due course. With reduction in cost of technology and storage benefit, CSP can contribute a significant portion to the RE share. Since CSP competes with PV for same high solar resource sites, there could be some trade-offs with regard to technology choice. While CSP is presently costlier than PV, its ability for storage and supporting the grid with ancillary services are its advantages. Similarly CSP also allows the possibility of hybrid plants with natural gas or coal.

Level 1 assumes that only 1 GW would be operational in the next 5 years (mainly due to higher costs), beyond which there will be a slight increase in generation capacity reaching a maximum of 10.5 GW by 2045. 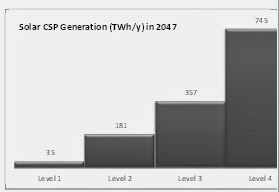 Deployment increases slowly till 2032 after which is starts reducing. After 2042 there is no additional deployment. Generation in 2047 would be to the tune of 35 TWh.

Level 2 assumes that there is slow but consistent growth in capacity addition of CSP. It reaches 4 GW by 2022, i.e. 20% of the total JNNSM target for grid connected solar. The final capacity in this level in year 2047 is 46 GW resulting in a generation of 181 TWh.

Level 3 assumes that CSP costs come down significantly and that there are no limitations on plant size etc. Improved transmission and HVDC lines together, result in faster capacity addition. 10.8 GW is reached by 2027 increasing thrice to 34 GW in the next ten years, and culminating in 90 GW by 2047. Generation by 2047 reaches 357 TWh.

Solar CSP becomes one of the prime sources of electricity generation; extended storage facility helps CSP reach maximum potential. Costs of solar system and storage fall as higher temperature technologies are introduced. Supply grows rapidly meeting the NAPCC targets by 2020 resulting in a capacity of 6.7 GW by 2022 and 187 GW in 2047, a CAGR of 15% over 30 years. Generation by 2047 reaches 745 TWh.