Projects include 75 MW in Greece (Maximus) and 50 MW in Cyprus (Helios Power) with Infinia’s PowerDishTM technology.

Infinia Corporation today announced involvement in two NER300 projects awarded to Helios Power and MAXIMUS by the European Commission in a first call proposal round awarding over €1.2 billion funding to 23 innovative renewable energy demonstration projects for the program.

The NER300 funding has been raised from the sale of 200 million allowances from the new entrants’ reserve (NER) of the EU Emissions Trading System. The sales were carried out by the European Investment Bank (EIB) between December 2011 and early October 2012. NER funding provides up to 50% of the relevant costs of the project and is paid out based on the project energy production. Private investment and/or national funding will cover the remaining funding needs.

"It’s an honor to partner with Helios Power and MAXIMUS," said Infinia CEO Mike Ward, "To have involvement in two projects is a testament to our PowerDish technology and emergence as a leader in utility-scale deployments around the world." 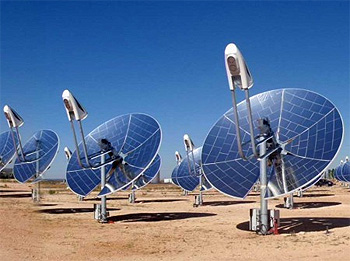 Infinia projects stemming from the award include 50 MW for Helios Power in Cyprus and 75 MW for MAXIMUS in Greece. The Cyprus/Helios project includes a large-scale PowerDish deployment near the city of Larnaca where each of the 16,920 dishes will supply electricity to the national grid. The Greece/MAXIMUS project in the Florina region will have a total installed capacity of 75.3 MWe and include 25,160 PowerDish units; the plant is composed of 37 small power plants that will be connected to the grid via a single connection point.

The Commission noted projects that received the award demonstrated that they represent the most cost-effective use of NER300 public funding, that they are financially and technically robust and that they fulfill strict eligibility criteria. "This includes how innovative the technology is and the potential for it to be scaled up and replicated, as well as the reasonable expectation of the project being up and running by the end of 2016."

"The spirit of NER300 program is to be an enabling mechanism to support innovative technologies proven already at small scale, as is the case of the PowerDish, in large scale commercial demonstration plants," said Infinia European Business Development Director, Brenda McCabe.

Once the awarded projects are operational, the EU expects to collectively increase the annual renewable energy production in Europe by 10 TWh.

In a press release by the Commission, Climate Action Commissioner Connie Hedegaard said: "Today’s Decision is a major milestone in EU climate policy. The NER300 program is in effect a ‘Robin Hood’ mechanism that makes polluters pay for large-scale demonstration of new low-carbon technologies. The €1.2 billion of grants – paid by the polluters – will leverage a further €2 billion of private investment in the 23 selected low-carbon demonstration projects."

"The NER300 is an innovative program and we are confident our technology will help create a lasting impact in Cyprus and Greece," said Ward. "We look forward to helping the EU meet its renewable energy goals."

Infinia Corporation is an energy technology company developing and manufacturing high-efficiency, free-piston Stirling generators that convert readily available and low cost heat sources such solar, biogas and natural gas into reliable on- or off- grid electricity. Following 30 years of development of its ultra-high reliability technology for the DOD, NASA and the DOE, Infinia is currently launching its solar product, the PowerDish™. The PowerDish is the world’s first Stirling-based solar power generation system suitable for automotive-scale manufacturing and deployment from small distribution-scale arrays to multi-megawatt, utility-scale solar power plants. For more information on Infinia Corp., its Stirling platform, or fuel-fired, combined heat and power (CHPP), hybrid 24/7 and PowerDish™ solar products, please visit www.infiniacorp.com.