Construction is set to begin this month on the world’s tallest solar tower—a 787-ft-high structure in Israel’s Negev desert that will supply 1% of the country’s power. Surrounded by 50,600 sun-tracking heliostats over 3.15 square kilometers, the tower will provide 121 MW of concentrating solar power (CSP) at the Ashalim Solar Thermal Station. The $800-million project is being built by a venture owned by Brightsource Energy, General Electric unit Alstom and financial partner Noy Fund. 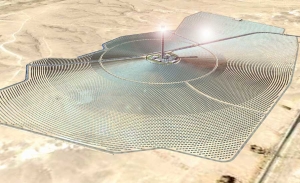 The tower, set to take four to five months to complete, features a stainless-steel wire-mesh envelope supported by a structure of struts and cables. “The challenge was to design an envelope that was light, visible and took into account the environmental conditions and, at the same time, did not require additional foundation,” says architect Eran Ziv. Megalim estimates the “architectural envelope” will add several million dollars to the project’s cost. The design team is still developing the process to attach the envelope and the strut-cable structure. The final stage will involve lifting into place the SRSG boiler. Swiss lift- technology firm Hebetec Engineering will hoist the 2,500-ton, 50-meter-high boiler to the top of the tower, which is 200 m high. “The combination of the weight, height and girth of the boiler makes the job unique,” says Gartner.

Due to space needs, CSP technology is far less popular than photovoltaics for use in solar power plants. The heliostats that surround the tower are equal to 1 million sq m of reflective surface. The mirrors will enable the tower to generate heat of up to 1,000°F, which will provide the steam to drive the turbine. Brightsource developed the heliostats, an upgraded version of those at the firm’s 390-MW Ivanpah, Calif., power plant. “Ivanpah served as a testing ground for the Israeli plant and allowed us to cut costs,” says Gartner. Among the improvements are larger heliostats and use of a Wi-Fi network to control them. Ivanpah’s three 459-ft-high towers produce triple the power but use four times the amount of land.

The Ashalim project is set to finish next year, but a second, 121-MW solar-thermal plant will be built by 2018. Israeli contractor Shikun & Binui Holdings Ltd. last month replaced as builder-developer the financially ailing Spanish firm Abengoa Group. Both plants will sell power at a higher-than-market price to state-owned Israel Electric Corp. But the country is targeting 10% power production from renewables by 2020.