We are proud of the fact that as of today almost 9,000 of the total of 14,500 Stellio heliostats have been installed at the solar tower power plant in Hami, China. Every day, about 70 new heliostats are added, which are assembled on site in a production hall. They are then mounted on the pylons already installed in the solar field. Then a short acceptance and calibration process takes place. 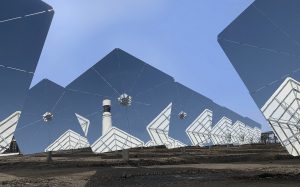 As soon as the 14,500 heliostats are ready for operation, they will reflect the solar radiation onto the central receiver on the 200 m high tower and thus heat the heat transfer fluid (molten salt mixture) to 565 °C.

The power plant can feed 50 MW of electrical power into the grid, even up to 12 hours without sunshine, because large salt tanks serve as thermal energy storage.

For the power plant in Hami, the Stellio consortium was selected as the technology supplier for the solar field. Stellio has already received numerous awards, including from SolarPACES, CSP Plaza and CSP Today.