Located near the central city of Yazd in central Iran, the new Concentrated Solar Power plant will produce 17 megawatts of clean energy, according to Tarztalab. 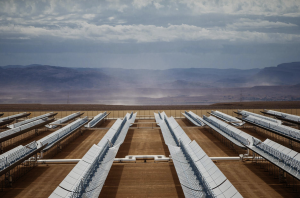 Iran has nearly 500 MW of capacity for traditional photovoltaic solar power. Thermal solar, however, uses a new technology that allows storage of the sun’s heat to generate electricity for hours, including at night.

Based on Iran’s Sixth Five-Year National Development Plan (2016-2021), the country was aiming for 5,000 megawatts (MW) increase in renewable capacity to meet growing domestic demand and expand its presence in the regional electricity market.

But in the final year of the plan, only one-fifth of the figure has been achieved.

Iran was supposed to become a regional hub in the field of energy in the past Iranian calendar decade (March 2011-March 2021), but evidence shows that the country is facing a shortage even in the supply of electricity inside the country, an issue that many believe that could be achieved by developing renewable energy and increasing efficiency of the thermal power plants.

After the Joint Comprehensive Plan of Action (JCPOA), known commonly as the Iran nuclear deal, in July 2015, many foreign delegations came to Iran for making investments and constructing renewable power plants in the country.

However, following the re-imposition of the U.S. sanctions, foreign investment in the country’s renewable industry has fallen significantly.

The Energy Ministry has recently announced plans to roll out around 10,000 MW of new renewables capacity within the next four years on top of nearly 1,000 MW which is operating currently.