Is There a More Efficient Way to Generate Clean Energy with Concentrated Solar Power?

Is There a More Efficient Way to Generate Clean Energy with Concentrated Solar Power?

Increase that heat a million-fold and you understand the concept of a solar thermal plant: a giant field of mirrors, focusing sunlight on a black metal chamber filled with water, air or other heat-carrying fluids. The concentrated sunlight is absorbed by the chamber walls and then conducted through the fluid, making it extremely hot. This concept can serve many purposes, including serving as reactors in chemical plants or converting sunlight into electricity in giant power plants. 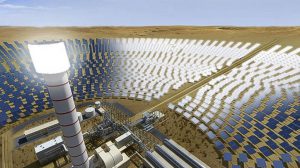 So far, however, the energy output of solar thermal plants has been disappointing. Blame it on the tea kettle effect: When making water for tea, the hottest region is where the flames meet the exterior walls of the kettle. But what works well enough in the kitchen is a problem in large-scale applications like solar thermal plants because roughly half the solar energy is lost to the environment instead of being turned into usable energy.

Ali Mani, assistant professor of mechanical engineering at Stanford, is doing computer simulations to test what could be a more efficient way to use concentrated sunlight as a heat source. Instead of focusing sunlight on a black chamber, his lab is simulating what would happen if concentrated light were beamed into a transparent chamber, or tea kettle, to continue the analogy. In theory, photons of light passing through the clear chamber would collide with the fluid molecules inside, heating the fluid from within with significantly less energy loss.

This see-through design, introduced years ago by researchers at the U.S. Department of Energy, poses its own challenges. Because the working fluid—in this case air—is often as transparent as the chamber’s exterior, many photons zip through the system without a heat-exchanging collision.

To increase the potential for close encounters of a thermal kind, Mani and his team have modeled different approaches to making the air murky and more heat-absorbent. In their computer models, they test various strategies for scattering small solid particles through the chamber to provide absorbing spots inside the column of air. In effect, they are breaking the old black chamber walls into millions of small pieces and putting them next to the air molecules where the heat transfer is actually intended.

These tiny particles are difficult to control. Think about dust illuminated by a ray of sunlight swirling in seemingly unpredictable patterns. In Mani’s field of fluid mechanics such chaotic movement is called turbulence. His team is creating computer models to one day manipulate the turbulence inside the heating chamber to make the overall system more efficient at heat extraction.

In a perfect system, air would move through the transparent chamber quickly. Solid particles sucked into the airflow would be evenly distributed, creating the potential to heat the entire column of air with little or no loss of energy. But in experimental tests and laboratory simulations done thus far the particles did not evenly disperse, nor did the air heat uniformly. The computer models are helping the researchers understand why.

As the particle-filled air flows through the chamber, the particles tend to cluster, forming dark, undulating fingers of hotter air that snake through the chamber. By contrast, photons zip through the clearer, particle-free air, leaving those regions cooler. Some zones are too hot, some are too cold, and overall much of the light energy either is not absorbed or is re-radiated out again by the hot zones. “It’s almost like we’re back at square one,” says Mani.

To understand and counteract this particle clustering effect, Mani and his team have combined three complex equations describing fluid flow, particle motions and heat transfer into a ginormous computational model. The simulation allows them to investigate how fast air flows through the chamber. They can simulate the introduction of different-sized particles into the flow. And they can observe what happens when particle clusters heat up the surrounding air at different rates. Simulations with this many variables bump up against the limits of computational know-how.

“For every point in space and every instance in time, you need to know what’s going on,” says Mani.

So far, Mani’s team has only modeled small systems but already the simulations point toward solutions. For instance, the researchers have simulated lacing the air with particles of different sizes. Just like birds of a feather flock together, so do particles of the same size tend to cluster together. The models also suggest that seeding the chamber with particles of varied sizes might be a way to use turbulence to improve the overall heat extraction.

With these and other fixes, the researchers hope to force particles to mix more evenly—helping achieve the goal of uniformly heating the air column with minimal energy loss. In coming years, Mani’s team and his colleagues will stage a large-scale simulation with billions of particles on a Department of Energy supercomputer. “It’s like an elephant in a dark room illuminated piece by piece,” says Mani. “At the end of the day, you discover the most important things and then it’s not that complicated anymore.”

This article was originally published by Stanford News here and was republished with permission.