The concentrated solar power plant will contribute significantly to Israel’s target of making 10% of the country’s electricity supply renewable by 2020, and 17% by 2030, according to Energy Minister Yuval Steinitz.
The largest renewable energy project in Israel, a vast concentrating solar thermal power plant near Ashalim in the Negev, was inaugurated on Thursday at a ceremony attended by Energy Minister Yuval Steinitz and senior government and business officials. 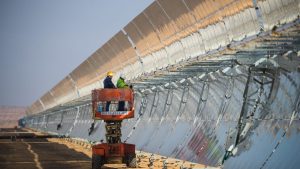 “If our main purpose in the past was to supply energy for the people in Israel, the Israeli economy and industry, and public health was maybe secondary, we have changed our perspective,” said Steinitz. “The main goal now is to supply energy but also to make it clean and to make sure that we will reduce rather than increase air pollution.”

The concentrating solar power plant, Steinitz said, will contribute significantly to Israel’s target of making 10% of the country’s electricity supply renewable by 2020, and 17% by 2030. At full capacity, the solar thermal plant will reduce approximately 245,000 tons of carbon dioxide emissions from fossil fuel sources, equivalent to taking 50,000 vehicles off the road.

“We’re going to meet our target next year but we are already considering to increase the goal for 2030 and increase the volume of renewables,” Steinitz said. “This is under examination by the Electricity Authority.

“In the near future, we will terminate the use of coal and other polluting fuels in Israel all together, close the coal turbines in Hadera and later on in Ashkelon. It will be only natural gas and renewables, mainly solar systems.”

Unlike nearby photovoltaic (PV) power plants, which directly convert sunlight into electricity, the concentrated solar power plant near Ashalim absorbs solar energy through over 450,000 rotating parabolic mirrors, forming long troughs and collector loops. Synthetic oil inside the loops is heated to 390°C, and by using heat exchangers, thermal energy is mixed with water to power steam turbines and produce electricity.

The concentrating solar power plant is the only facility in Israel that is also able to produce energy overnight. Home to one of the largest molten salt storage systems worldwide, the plant can provide an additional 4.5 hours of full capacity clean energy after sunset or during inclement weather.
The expansive facility sits alongside two additional PV solar plants, with the three projects near Ashalim boasting a combined capacity of 250 megawatts of energy. The neighboring 121-megawatt Megalim Solar Power plant, constructed by General Electric, features the world’s tallest concentrating solar power (CSP) tower.

“When our parents arrived in Israel there was no milk and honey, there was just desert and swampland – we dried the swamps and now we took something that was arid and dry, and turned it into a resource,” said Naty Saidoff, the controlling stakeholder of Shikun & Binui.

“Israel turned the saltwater into water, and the curse of the sun into a blessing. People turning on their air conditioning in Tel Aviv have the power to cool themselves from the desert sun.”

Negev Energy, commissioned by the State of Israel on a 28-year build-operate-transfer (BOT) concession contract, will the company operate the solar plant for 25 years following the commencement of operations. All electricity generated by the plant will be sold to the Israel Electric Corporation.

Construction and operation of the facility required the employment of hundreds of local employees, including many from nearby Bedouin communities in the Ramat Negev Regional Council. Over 50% of construction employees were from southern regions in Israel.

“A regular construction project requires dozens of permits, but here thousands of permits were required,” said Eran Doron, mayor of the Ramat Negev Regional Council. “For us, it was a huge challenge, but we did it joyfully as we knew we are part of something much bigger, part of this important vision of making Israel greener and cleaner.”