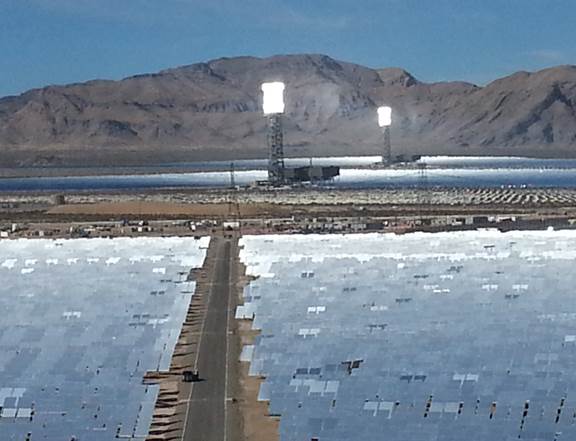 DOE Secretary Ernest Moniz was at the celebration and he noted, “Four of the world’s five biggest CSP projects and the first five U.S. utility-scale PV projects were supported by DOE loan guarantees." Moniz continued, “As a result, none of the next ten utility-scale solar installations required federal support.”

In the face of California’s severe drought, Moniz added that Ivanpah’s dry-cooling technology allows for a “parsimonious use of water.” 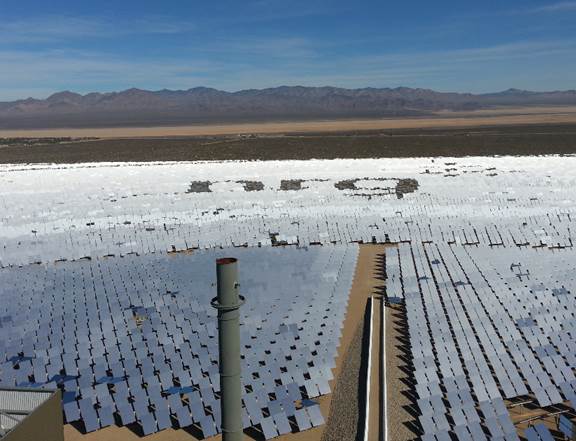 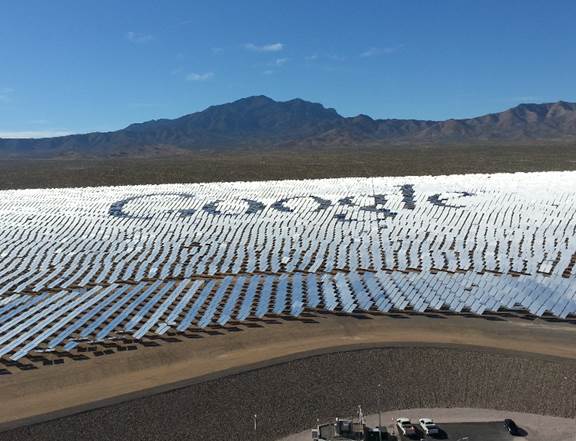 What they did not mention was the giant tent-like facility made from construction materials, originally developed for use in Iraq, that was built at Ivanpah to assemble heliostats. Designed to turn out 500 per day, it was actually able to turn out 650 twinned, garage-door sized mirrors per day at the height of Ivanpah’s construction. 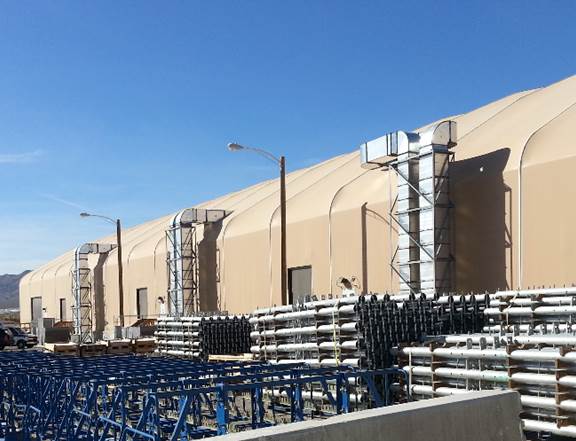 It is no longer in operation.

The plan was to use the facility to assemble heliostats for the next solar power tower project, but no such projects have yet been issued permits. Instead, NRG plans to use it as a warehouse. 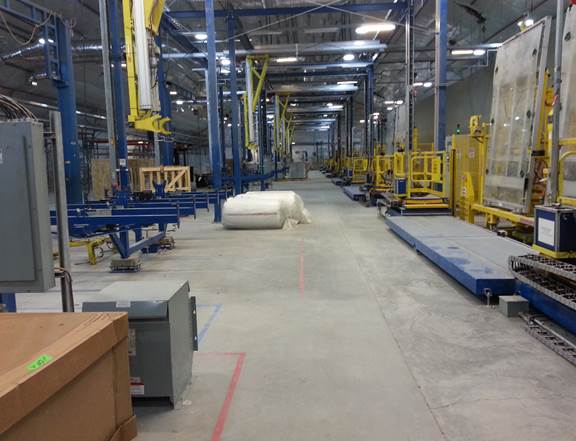 The short-term outlook for CSP is a “mixed bag,” according to GTM Research Solar Analyst Cory Honeyman. Two gigawatts’ worth of projects with longstanding PPAs are finally coming on-line, starting with Abengoa’s Solana Generating Station and the first phase of NextEra’s Genesis solar project. “But the dry spell in new procurement means that the installation growth we will see over the next two years is rooted in a static pipeline that has been more or less the same since the end of 2012.”

What’s the reason for this? As NRG Energy President Tom Doyle noted, the participation of offtakers Southern California Edison and Pacific Gas & Electric was key. But they and other California utilities have met their near-term renewable energy mandates and are not handing out the power purchase agreements that bring in equity investors like Google.

Demand has shifted to smaller-sized projects that can be rapidly deployed in order to meet near-term capacity needs, explained Honeyman. “Developers are now bidding into dwindling utility procurement programs at aggressive price points with thin margins that make it increasingly difficult to secure financing.”

But California and other Southwestern desert states will likely increase their renewables mandates, contended BSE spokesperson Joe Desmond. “Governor Brown said California’s 33 percent mandate is a floor, not a ceiling.” 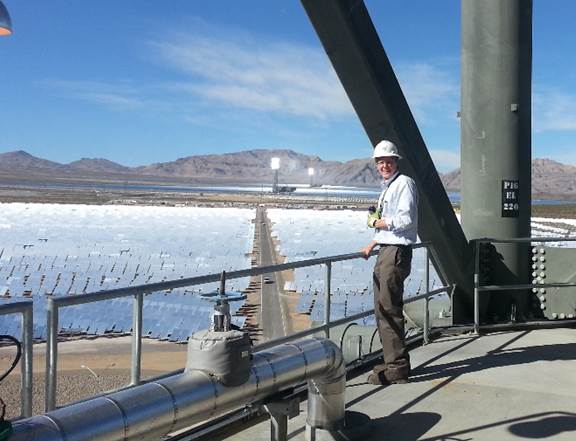 Another factor is the until-now unproven CSP technology. “Our challenge was to build Ivanpah to demonstrate the technology works at commercial scale,” said Ramm. Investors and policymakers in the U.S. and around the world have been waiting for that proof before committing to the technology. 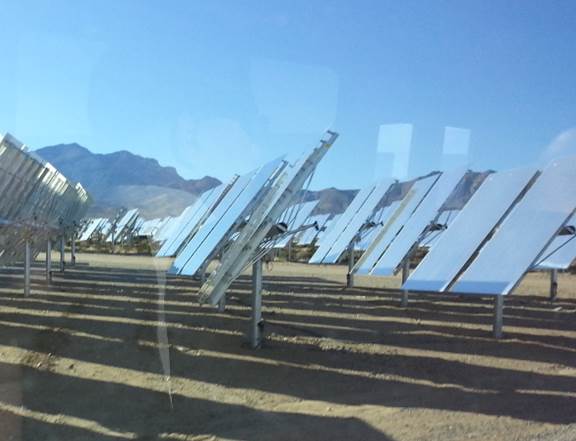 A third and crucial factor is the high cost of CSP. Though Ivanpah’s PPA prices are undisclosed, they are thought to be no less than the $0.135 per kilowatt-hour PPA price for SolarReserve’s 110-megawatt Crescent Dunes project in Nevada, far from DOE’s CSP target price of $0.06 per kilowatt-hour.

Through economies of scale, costs can be cut 30 percent to 40 percent, BSE’s Ramm said. BrightSource has said the costs for building Ivanpah’s third tower were significantly lower than those for the first.

Between 1981 and 1991, public support allowed developers to build nine parabolic trough projects, CSP Alliance President Tex Wilkins recently recalled. “The first Solar Energy Generating Station (SEGS) cost about $0.24 per kilowatt-hour, but the ninth SEGS came in at about $0.12 per kilowatt-hour.”

Both wind and PV were expensive until public support drove market growth, and CSP’s price could come down to $0.09 per kilowatt-hour, Wilkins said. “But not until more projects are built.”

Even at $0.09 per kilowatt-hour, CSP will find it difficult to compete in a market place dominated by still-falling PV prices and cheap natural gas. One of the keys to getting the cost down and attracting more utility interest will be adding storage capability, Ramm said, and BSE will incorporate molten salt storage into its next project. 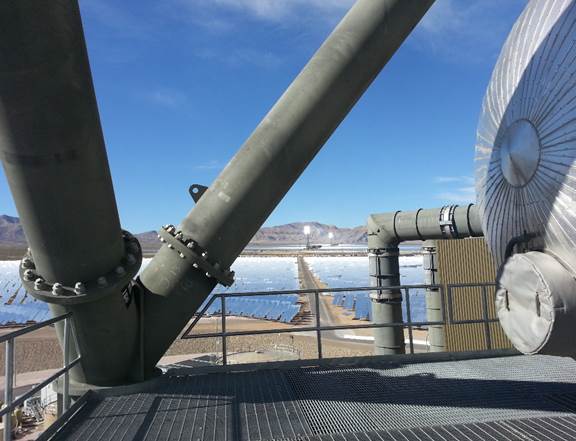 The bird-kill issue highlighted in a recent Wall Street Journal article is a non-issue, said NRG President David Crane. Only 44 birds were killed by solar radiation at Ivanpah since the project went on-line in December, he said, while millions are regularly killed by things like urban skyscrapers and domestic cats. And NRG is involved in intense efforts, in conjunction with state and federal environmental and regulatory agencies, “to take that 44 to 0.”

“The public is convinced there are only a handful of ways to get energy,” said Isaac Slade, lead singer for Grammy-winning rock group The Fray, which shot its most recent video at Ivanpah. “But those old-school ways do lasting damage, and my generation is hip to that.”