Khalifa University of Science and Technology, a research university dedicated to the advancement of learning through the discovery and application of knowledge, and Wahaj Solar (Wahaj Investment L.L.C) today announced they have signed an agreement to test and verify a patented prototype in the Concentrated Solar Power (CSP) industry at the Masdar Institute Solar Platform (MISP).

The 10-meter diameter high-flux solar furnace – the first medium-scale point solar concentrator –can focus solar energy efficiently to a lower point fixed on the ground generating a very high temperature which is easily accessible. This system is unique since the focal point is fixed on the ground while the solar disk turns around it throughout the day. This would result in many applications including low cost solar energy storage allowing for 24/7 electricity production, high efficiency in electricity production, hydrogen generation from water, desalination, as well as melting metals or sand to produce glass. 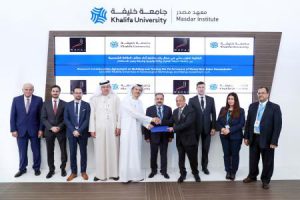 The project period is one year during which the performance of the concentrator will be tested analyzed, and certain applications demonstrated by a team led by Dr. Nicolas Calvet, Assistant Professor, College of Engineering, and Chair of the Masdar Institute Solar Platform – Khalifa University. The invention has already received favorable reviews from experts in reputable international research institutes worldwide.

Dr Arif Sultan Al Hammadi, Executive Vice-President, Khalifa University of Science and Technology, said: “The MISP is a unique world-class research facility, pushing the boundaries by being multipurpose, modular and the first-of-its-kind, bringing niche capabilities to the UAE. We welcome collaborations with industry partners that will result in cutting-edge solutions in solar power, thereby facilitating faster adoption of sustainable energy technologies. We believe testing of this innovative prototype from Wahaj Solar will further demonstrate MISP’s capabilities and help in the development of CSP components, and high-temperature thermal energy storage (TES) solutions.”

Motasim Al Daour, the majority shareholder at Wahaj Solar said: “We are working with the Masdar Institute Solar Platform at Khalifa University because we would like to take advantage of the available expertise and resources at this world class facility. In collaboration with Khalifa University, we are keen launch this potentially breakthrough invention from the UAE to the entire world in the hope of considerably contributing to the progress of the CSP technology as an alternative clean source of energy.”

The technology is already patented by Wahaj’s Dr Ayman Al-Maaitah in the US, European Union, GCC and at the World Intellectual Property Organization (WIPO) with priority protection in 150 countries worldwide.

The MISP is a unique tool for developing large scale TES systems for on-demand and ‘dispatchable’ electricity production. Initially built as a demonstration plant in 2009, the facility has been significantly modified and extended by Masdar Institute in 2014 to become a user research facility also valued by industry, capable of testing large scale TES units up to 500 kWh storage capacity. This innovative and educative research facility has already attracted several international collaborations.