With its abundant sunlight, the Goldfields has been identified as a prime location for a large scale concentrated solar power station.

West Australian Greens Senator Scott Ludlam was in Kalgoorlie today to host a meeting with local stakeholders to discuss proposals for a solar power station that would take advantage of funds supplied by the federal government’s Clean Energy Finance Corporation.

From July 1 the CEFC will have $2 billion a year to invest in renewable energy projects.

Photovoltaic or PV solar power stations are not able to store energy that would allow them to run without sunlight.

Senator Ludlam said while Investec’s project would be an asset to the region, he would like to see "next generation" solar technology used in the Goldfields.

"Investec is proposing a photovoltaic plant, but an industrial scale one… they are the sort of panels that you put on your roof on a large utility scale, it’s a really exciting project for the Goldfields," he said. 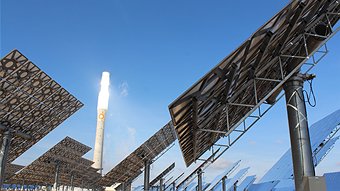 "What we are proposing are solar concentration plants (Concentrating Solar Thermal) that aren’t photovoltaic, it’s a field of glass one and a half kilometres across that reflect the suns heat into a central tower, you can store the sun’s energy and then let it go after dark or in cloudy weather and effectively you can run solar power stations around the clock.

"They’ve built them in Europe, they’re building them right now on a large scale in north America, we think the Goldfields is the best place in Australia to start and we’re pretty encouraged by the response that we got today."

Senator Ludlam has created a video impression of what a CST solar field would look like in the Goldfields.

He said the need for a large solar power station was urgent, with recent heatwaves indicative of climate change and pricing for renewable energies more affordable than ever.

City of Kalgoorlie Boulder CEO Don Burnett said the region was a perfect and secure location for a large scale solar station because of the guaranteed sunshine.

"The city has for a number of years, been looking forward to a solar proposal coming to… the region," he said.

"It’s a great location for a solar proposal and the benefits to the city and the region would be immense, but also it’s a great opportunity for the state and federal governments to be involved in innovation in sustainable energy."

Goldfields Renewable Energy Lobby representative Rod Botica said Kalgoorlie would have a bright future if a solar power station was built in the region.

"Sustainability is a very important issue for us because as our resources are mined out we have to find ways to keep our community bright and vibrant by fostering new industry into the City," he said.

Mr Botica said Kalgoorlie should look to other gold mining cities in Australia, such as Ballarat and Bendigo, who have created new industries since gold production has slowed down.

"If we have large capability to produce carbon free energy at competitive prices that attracts industry to the Goldfields then we have a very bright future."

A community forum will be held tonight to discuss the prospect of bringing a solar energy to Kalgoorlie with local residents.

The new chief of the Australian Solar Thermal Research Initiative (ASTRI) says the cost of producing solar thermal power in Australia could be halved by 2020.

The Initiative’s aim is to bring the cost of solar thermal power down from 25 cents per kilowatt hour to around 10 cents over eight years, bringing it into line with other major sources of renewable energy such as photovoltaic (PV) solar and wind power; with an ultimate goal of achieving grid parity with fossil fuels.