In Morocco, a group of companies led by Saudi Arabian ACWA Power International is going to build a power plant that will provide electricity for less than 15 euro cents per kWh.

This amounts to much less than providers in Spain are currently paid for electricity generated at their solar power plants. Ulrich Wagner, Member of the DLR Executive Board responsible for Energy and Transport, explains why solar power plants are now able to produce less expensive electricity and why he anticipates further price reductions.

Question: Why is electricity from solar thermal power plants becoming less expensive at the moment?

Ulrich Wagner: When the construction boom for solar thermal power plants began in Spain back in 2007, companies needed the financial incentive of receiving almost 30 euro cents per kilowatt hour for electrical power before they would commit to investing in large projects with amounts of up to 300 million euro. This kind of project constituted a high-risk venture for these companies. The incentives, therefore, needed to be high. But the companies have now learned to quantify and limit those risks. Furthermore, all components in these power stations have been improved substantially with support from the world of research, and supply chains have been optimised. Then of course, there is the fact that sunlight in Morocco is available in larger – all of which helps to reduce costs. DLR studies have already shown that solar thermal power plants have the potential to generate electricity in a cost-effective manner. European manufacturers and the European Solar Thermal Electricity Association, ESTELA, are also assuming that, within the next few years, solar power plant operators will be able to offer electricity for 10 euro cents per kilowatt hour from good sites for solar power plants. What we see here is, to the best of our knowledge, an important step and by no means the end of a development leading to less expensive solar power prices. 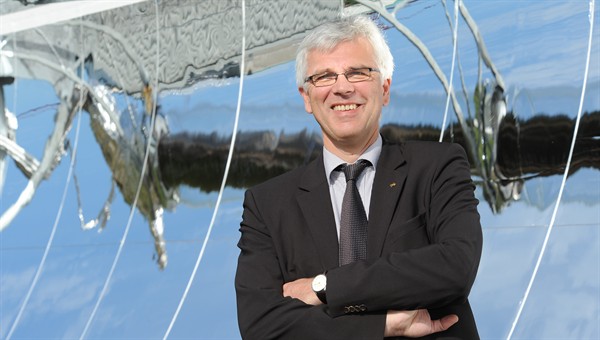 "In the next 10 years, solar thermal power stations are probably going to break through the 10 cents per kilowatt hour mark".

Question: How are prices going to evolve?

Ulrich Wagner: The more power stations that are built, the faster and more steeply costs are going to drop. Moreover, many manufacturers are now preparing systems that can operate at higher temperatures and that are more efficient. They will, for example, require less mirror area to generate the same level of power, which will naturally reduce costs. At DLR, we are placing greater emphasis on tower power plants that operate at higher temperatures – reaching up to 1000 degrees Celsius – and that are therefore highly efficient. In addition, we are developing testing methods to enable power plant components, such as mirrors or receiver tubes, to be utilised much better. Encouraging signs suggest that, in the next 10 years, we may fall below the mark of 10 euro cents per kilowatt hour.

Question: We often hear the argument that electricity from photovoltaic systems is much less expensive.

Question: How is DLR supporting the expansion of renewable forms of energy?

Ulrich Wagner: With our DESERTEC studies, we helped to pave the way in Morocco for a ‘Solar Plan’. We still collaborate closely with the Moroccan Agency for Solar Energy, MASEN,and with IRESEN, the recently founded research institute for renewable energies. Among other things, DLR has helped to determine and quantify the availability of solar radiation resources. DLR employees were also involved in monitoring the construction of the first solar thermal power plant to enter service, located at Ain Beni Matar, in the north of Morocco. We also train technical specialists in Morocco and in other countries in the region as part of our ‘enerMEN’ training courses.

Question: German industry is a technological leader in the field of solar thermal power plants. What is the extent of involvement in projects of this kind?

Ulrich Wagner: That varies. At a power plant in Egypt, the engineering, mirrors, absorber tubes and the turbine come from Germany. This constitutes more than half of the total supplied parts. In Morocco, the proportion of German products is lower. This is due to a strong Spanish presence. Our commitment to DLR should of course assist German companies in positioning themselves better here.

Question: How do you see the future development of solar thermal power stations?

Ulrich Wagner: Numerous countries in the ‘Sun Belt’ – north and south of the Equator – have shown great interest in these solar power plants, as they have the capacity to generate important base load and fully controllable power. DLR is therefore conducting intensive research into further technological developments – particularly into energy storage systems and into ‘energy meteorology’, to provide more dependable forecasts for generating electricity using solar and wind power. The combination of these research topics leads to a substantial improvement in efficiency, in costs and, last but not least, in reliability.