Researchers have shown how to modify commercially available silicon wafers into a structure that efficiently absorbs solar energy and withstands the high temperatures needed for «concentrated solar power» plants that might run up to 24 hours a day.

The research advances global efforts to design hybrid systems that combine solar photovoltaic cells, which convert visible and ultraviolet light into electricity, thermoelectric devices that convert heat into electricity, and steam turbines to generate electricity. The thermoelectric devices and steam turbines would be driven by heat collected and stored using mirrors to focus sunlight onto a «selective solar absorber and reflector.»

To efficiently collect heat from the sun, specially designed surfaces based on low-cost materials are needed to selectively absorb only photons from a certain range of the light spectrum while reflecting others.

«The key point is that to capture sunlight as efficiently as possible you have to do two things that compete with each other: one is to absorb as much power from the sun as possible, but secondly, not reradiate that power,» said Peter Bermel, an assistant professor in Purdue University’s School of Electrical and Computer Engineering. «If you make something really hot it starts to glow red, and we are trying to prevent that re-emission from happening while still absorbing the sunlight.»

He led a research team that demonstrated how to modify a silicon wafer to withstand temperatures approaching 535 degrees Celsius without losing stability or performance.

«In this study, we use off-the-shelf silicon wafers as a platform to design, fabricate, and characterize a structure capable of absorbing lots of sunlight, without re-radiating as much heat,» he said. «We add a layer on the top and bottom to give it greater ability to absorb sunlight, while also reflecting longer wavelengths.»

Findings are detailed in a paper appearing online April 3 in the journal Applied Physics Letters.

«This work shows that highly efficient solar thermal energy conversion can be achieved with very simple structures and common materials,» said graduate student Zhiguang Zhou. «This is a key step towards real applications, and we hope that it will inspire more efforts along this track.» 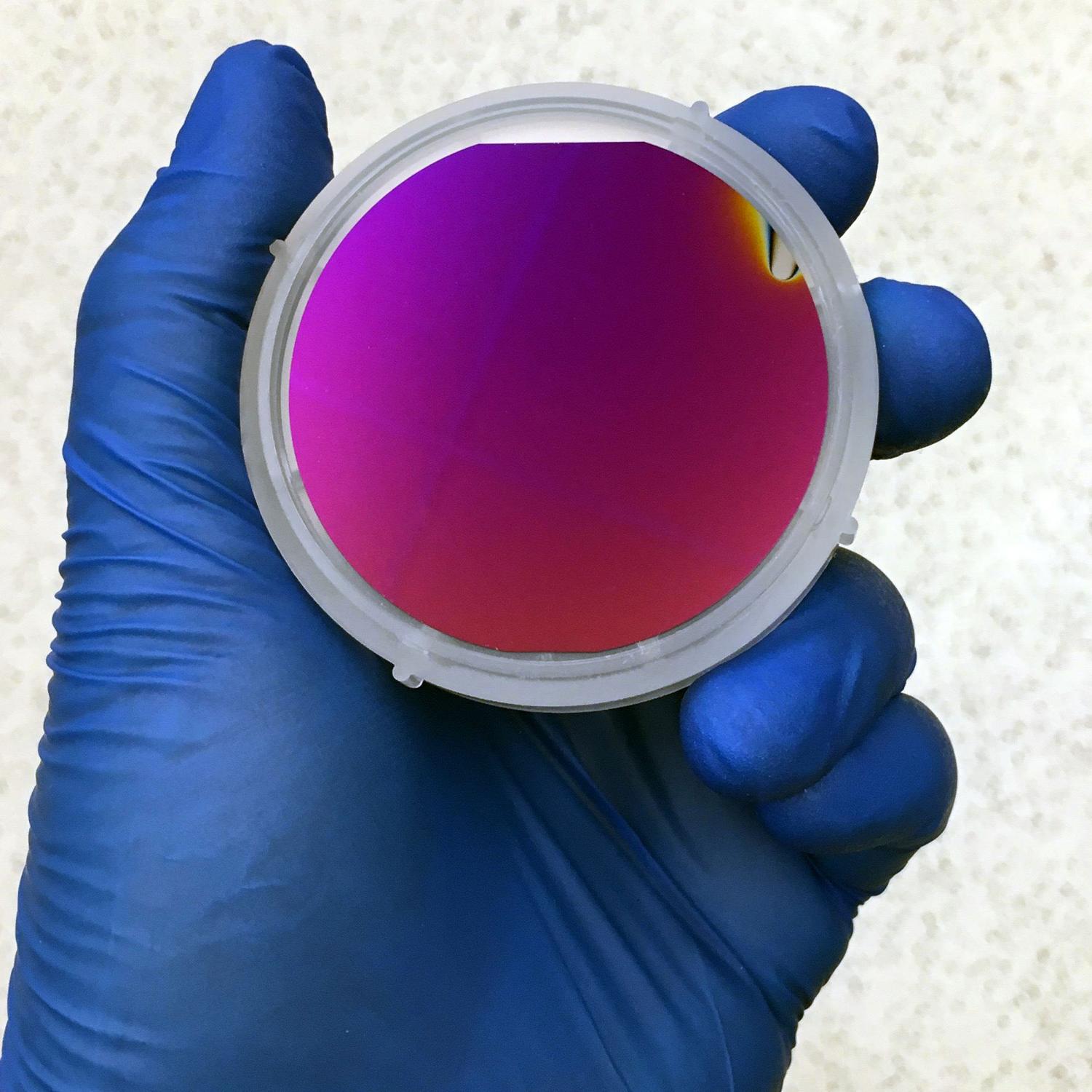 Researchers at Purdue University created this 2-inch silicon wafer coated with thin films of tantalum and silicon nitride for enhanced solar absorption. The solar absorber was designed for use in “concentrated solar power” plants that might run up to 24 hours a day. Credit: Purdue University image/Zhiguang Zhou

The silicon solar device contains an upper layer of an anti-reflection coating made of silicon nitride and a back reflective layer made of silver.

Complicating the research is that properties of the material change dramatically while going from room temperature to around 500 degrees Celsius. Extending previous work by researchers in the field, the team developed a detailed model that simulates how the material properties change with rising temperature. The model helped researchers design the structure built from silicon wafers, and led to the discovery that a selective absorber made of thin films of silicon can exhibit even higher performance.

At the same time, the flexibility of thin films offers potential advantages, since they can be applied to curved structures such as the mirrored «parabolic troughs» used for concentrated solar power systems. The troughs track the sun all day, concentrating the sun’s energy by about 50 times.

«Not only do these thin films appear to have better performance, but they are very flexible, so you could coat any surface,» Bermel said.

Ideally, the hybrid solar-power system could achieve efficiencies of more than 50 percent, compared to 31 percent for photovoltaic cells alone. The researchers estimated that with 50 suns concentration produced with the parabolic troughs, it is possible to convert 51.5 percent of sunlight into usable, high-grade heat at 490 degrees Celsius.

«These results complement our earlier work in designing hybrid solar systems and represent one of the key experimental components of a solar-power system with built-in storage for round-the-clock solar-power generation,» Bermel said.

Future research will include work to study the flexible thin-film-based approach. The long-range goal is to incorporate all of the components into a working system for continuous generation of electricity. Such systems might find applications for both large-scale power generation and small residential systems.