Solar power accounts for about 2% of U.S. electricity, but it could become more widespread if it were cheaper to generate this electricity and make it readily available on cloudy days and at nighttime.

To lower those costs, Purdue University engineers are developing ways to improve how facilities called concentrated solar power plants produce electricity. These plants provide power at off-peak times by storing heat captured from sunlight that is focused by thousands of mirrors onto a small area.

Developments in this research are important steps for putting solar heat-to-electricity generation in direct cost competition with fossil fuels, which generate more than 60% of electricity in the U.S.

Solar panel systems installed on farms and on rooftops are commonly used to generate electricity from the sun and already store energy for later use using batteries, but concentrated solar power plants can offer large-scale energy storage at a lower cost.

“Since storing solar energy as heat is already cheaper than storing energy via batteries, the next step is reducing the cost of generating electricity from the sun’s heat,” said Kenneth Sandhage, Purdue’s Reilly Professor of Materials Engineering. 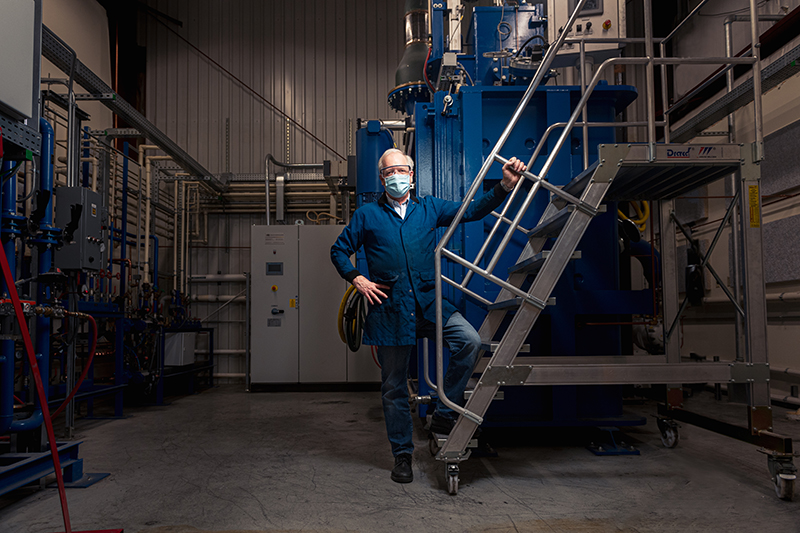 To make it cheaper for concentrated solar power plants to produce electricity, the turbines of these plants need to operate at much higher temperatures. Turbines currently operate at a peak temperature of about 1,022 degrees Fahrenheit. 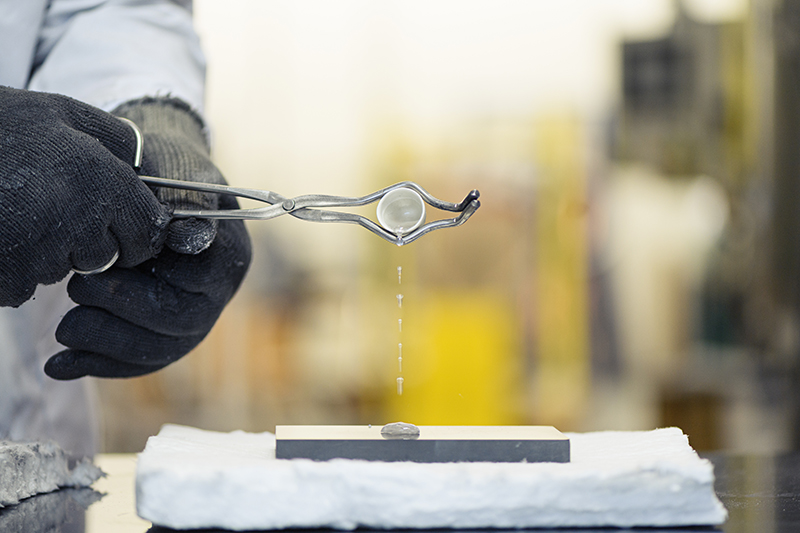 By operating the turbines at 1,382 degrees Fahrenheit or higher, a concentrated solar power plant could convert heat energy to electricity more efficiently. This also calls for enabling low-cost storage of solar heat at higher temperatures so that the plants can produce electricity 24 hours a day and respond quickly to surges in electrical demand.

Concentrated solar power plants can store energy from the sun by heating molten salts, but currently used molten nitrate salts would degrade at 1,382 degrees Fahrenheit. Sandhage and other researchers in the field have been turning to seawater for chloride-based salts that can stay stable enough at higher temperatures.

But seawater-derived molten chlorides, such as magnesium chloride-potassium chloride-bearing salts that researchers have examined so far, degrade by oxidation in ambient air at 1,382 degrees Fahrenheit.

In a study published in Materials Today, Sandhage’s research group predicted and demonstrated that a different sea-water-derived molten salt, a calcium chloride-sodium chloride composition, is highly resistant to oxidation in ambient air at 1,382 degrees Fahrenheit.

Sandhage’s research group also developed a way to make nickel corrosion-resistant so that it can better contain a molten salt such as the calcium chloride-sodium chloride composition.

“We have identified and demonstrated a salt that is stable and plentiful, and we have a containment strategy for holding the salt for extended times to store the energy for use when the sun isn’t shining,” Sandhage said.

Turning up the heat, one step at a time

To keep lowering the costs of generating electricity from concentrated solar power plants, other steps in the electricity generation process also need to handle higher temperatures.

One of those steps is the transfer of heat from a molten salt to a high-pressure working fluid through devices called heat exchangers. Upon heating, the working fluid expands and spins the turbine for generating electricity.

Compact, cost-effective heat exchangers are typically made of stainless steel alloys that would become too soft for use at 1,382 degrees Fahrenheit with a high-pressure working fluid.

In 2018, Sandhage and his collaborators published a paper in Nature revealing how heat exchangers made of a ceramic-metal composite material would be capable of withstanding the higher temperatures and pressures needed for generating electricity more efficiently. Purdue researchers invented this composite-based heat exchanger using materials that had been successfully tested at over 4,000 degrees Fahrenheit in solid-fuel rocket nozzles.

Molten salt and heat exchangers that can handle the heat are just two pieces of the puzzle. Other researchers in the field, for example, are making improvements to receivers – metal tubing carrying the molten salt to be heated by sunlight – and the mirrors that concentrate sunlight.

“If you want to run the whole system hotter, you can’t have a weak link anywhere in the chain,” Sandhage said.

Purdue University is a top public research institution developing practical solutions to today’s toughest challenges. Ranked the No. 5 Most Innovative University in the United States by U.S. News & World Report, Purdue delivers world-changing research and out-of-this-world discovery. Committed to hands-on and online, real-world learning, Purdue offers a transformative education to all. Committed to affordability and accessibility, Purdue has frozen tuition and most fees at 2012-13 levels, enabling more students than ever to graduate debt-free. See how Purdue never stops in the persistent pursuit of the next giant leap at https://purdue.edu/