“When we conducted the solar experiments to investigate the conventional thermal decomposition of methane at the temperatures from 1,300 °C to 1,500 °C in 2013 and 2014, we noticed that very small amounts of acetylene, ethylene, and ethane were produced in addition to hydrogen and carbon as the products of thermal decomposition of methane. This finding from such experiences in the past solar experiments became a key – an opportunity to devise, propose, and try the new idea,” Kimura said. 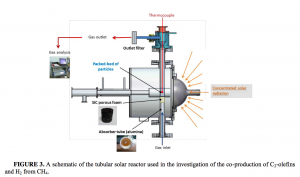 In the first step, the solar field is used to directly heat a thermochemical and a thermo-catalytic conversion process in their solar reactor to decompose methane (CH4) into hydrogen (H2), acetylene (C2H2) and ethylene (C2H4).

In the second step, carbon nanotubes are formed by decomposing both produced acetylene and ethylene and remained methane at a lower temperature of under 1,000 °C, on the surface of iron, nickel or palladium catalysts. The yield of carbon nanotubes is increased by using this unsaturated acetylene and ethylene from the first step as additional carbon sources.

“One advantage of the two-step process is to be able to enlarge the yield of nanotubes, which can be improved by using acetylene and ethylene as additional carbon sources in addition to the methane as the primary carbon source,” said Kimura.

Problems avoided, and challenges ahead

There are two ways the process is novel, the particular two-step thermochemistry itself, and the rapid heating and rapid cooling of methane in the tube, which enhances the production of carbon black, graphite and carbon nanotubes.

“We combine two conventional elemental processes for producing hydrogen and various carbon materials from methane without producing carbon dioxide, for the purpose of avoiding a few technological problems of the conventional process of direct thermal decomposition of methane,” said Kimura.

The most important of these avoided technological problems is that at the high temperatures (of over 1,300 °C typically used in solar hydrogen thermochemistry) carbon deposits can adhere to the reactor walls; reducing efficient operation of a solar reactor.

Kimura and co-authors Seo and Abanades devised a process that operates at a lower temperature in the second step, below 1,000 °C, so the carbon adheres to the catalyst instead. The intermediate formation of gaseous C2-hyodrocarbons (C2H2 and C2H4) helps inhibit the obstruction of the reactor tube.

“The carbon deposits only on the surface of the catalyst at the mid-temperature (less than 1,000 °C) in the second step. No thermal decomposition of methane, acetylene, and ethylene occurs at such temperature, but catalytic decomposition occurs,” Kimura explained.

The process is not without its challenges: Because of the additional injection of hydrogen recycled in the process, the amount of solar energy required to reach the temperatures is slightly increased and the solar reactor design has added complexity.