One of the most ambitious solar plant projects taking root right in the Sahara desert’s vast resources of sunshine, could power Europe for years.

A Malta-backed project this week filed a permit request to the Tunisian energy ministry to build a 4.5GW capacity solar farm in the southwest of the country, near Rjim Maatoug, following the failure of the €400 billion Desertec initiative due to political instability in the region.

The electricity generated will be destined for Europe, with cables under the sea to Malta, Italy and France.

TuNur chief executive Kevin Sara said that a first 250MW phase, with a connection to Malta, could be running by 2020, for an estimated €1.6 billion investment.

TuNur’s chairman is Joseph Zammit, chairman of the Zammit Group, which is also active in the importation of automobiles, shipping, and oil and gas industries.

TuNur plans to use concentrated solar power technology, which works by reflecting the sun’s rays onto a central tower from an array of mirrors. Using molten salt to store the energy, it will flex generation to meet variable demand. The initial 250MW plant would already be one of the largest thermal solar facilities on earth.

If fully realised, the development would cover 25,000 hectares, nearly three times the area of Manhattan. 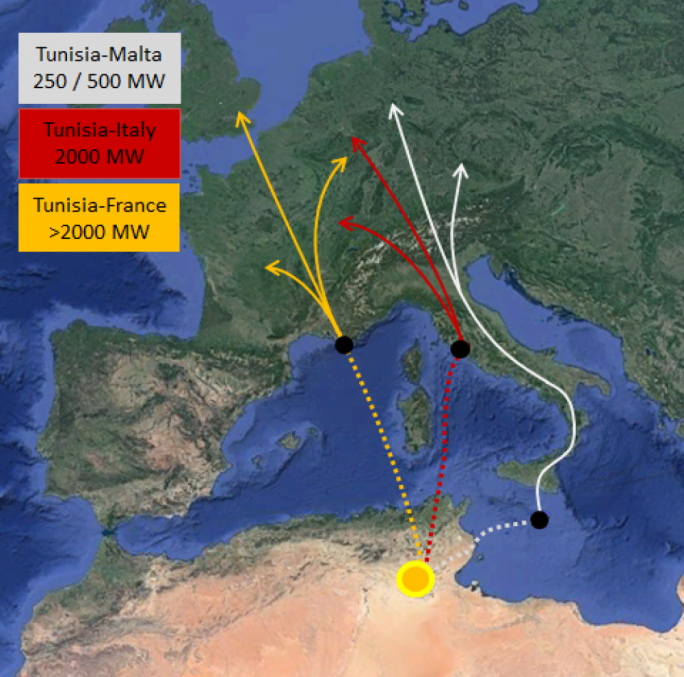 Three HVDC submarine cable systems are under development, which will allow the transport of power to Europe

Three HVDC submarine cable systems are under development, which will allow the transport of power to Europe with low losses.

The first cable links Tunisia and Malta, as Malta is already connected to the European grid, reinforcing the island’s position as an “energy hub” in the centre of the Mediterranean.

Sara says the economics of the project are compelling: “The site in the Sahara receives twice as much solar energy compared to sites in central Europe. So for the same investment, we can produce twice as much electricity. In a subsidy-free world, we will always be a low-cost producer, even when transmission costs are factored in.”

Sara has said that there are still political hurdles, having lobbied hard to get provision for exports included in clean energy laws, against resistance from the Tunisian state electricity monopoly. This is its first test case.

The TuNur project is 50% owned by UK-based company Nur Energie and 50% owned by investors from Tunisia (Cherif Ben Cherifa) and Malta’s Zammit Group.

Large-scale solar projects in the Sahara, such as the failed Desertec initiative, have been billed as excellent opportunities to lower the price of energy generation and fulfil climate commitments for oil-thirsty economies.

The Saharan desert land is inexpensive and mostly unused. According to UC Berkley’s Prof. Mehran Moaelem, a nuclear energy expert, just 1.2% of the African Sahara would be needed to replace all forms of energy production in the world.

But some critics have argued that solar farms in the desert also are aimed at sustaining Europe’s extraordinary energy needs. In 2015, Algerian activist Hamza Hamoucehene accused proponents of the Desertec initiative of neo-colonialism.