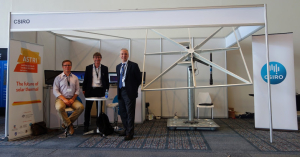 He is also the Coordinator of EU-SOLARIS, a six million Euros European FP7 project whose goal is to carry out all the preparatory activities needed to create an international organization to manage, as a Distributed Large European Research Infrastructure, the Concentrating Solar Thermal research infrastructures of eleven European and Mediterranean research centres. He has been Former Director of the Solar Thermal Energy Department of the National Renewable Energy Centre of Spain (CENER); Chair and Full Professor of the Engineering Department of the University of Texas at Brownsville; and Director of the Plataforma Solar de Almería of CIEMAT the largest European solar research infrastructure.

This is the second time, Dr. Blanco is re-elected Chair of the Executive Committee of SolarPACES, the Implementing Agreement of the International Energy Agency for Solar Power and Chemical Energy Systems. He was elected for the first time for this positon in September, 2011 at a SolarPACES Executive Committee meeting held in Granada, Spain.