Located in Al Dhafra, Abu Dhabi’s western region, the 100 megawatt-capacity (MW) Shams 1 was the largest concentrated solar power plant in the world at the time of its inauguration in 2013 and the first plant of its kind in the Middle East & North Africa. It also represented the world’s largest financing transaction for a solar energy project.

Shams 1 uses 258,000 parabolic trough mirrors spread over 2.5 square-kilometres to power an electricity turbine with the heat of the sun. 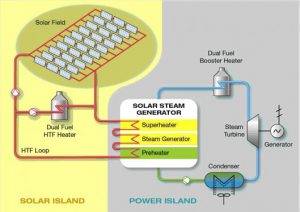 To date, the project has achieved a net production of 972,352.33 megawatt-hours (Mwh), enough electricity to power nearly 110,000 homes for one year while displacing more than 720,000 metric tons of carbon dioxide. That is the equivalent of saving more than 360 million kilos of coal.

«When Shams 1 was inaugurated five years ago, it was a breakthrough for the renewable energy sector, not only in the UAE but the MENA region as a whole,» said Yousif Al Ali, Chairman of Shams Power Company. «To complete five years of uninterrupted power generation is an impressive achievement.»

«CSP technology is now widely accepted as a proven technology for large-scale power generation, while Shams 1, a landmark in the Al Dhafra region, has demonstrated the economic, technical and environmental advantages of deploying large-scale solar thermal power in the UAE,» Al Ali said. «Such investments build knowledge, experience and skills, stimulating job growth and activity in other areas of the economy.»

Shams 1 employs around 100 staff with UAE nationals occupying 60 percent of management positions. Moreover, the project has attracted contractors and service providers to the region that are supporting the wider development of solar thermal technology. Further demonstrating the operational efficiency of large-scale solar power, Shams 1 has also achieved 11 million man hours without a lost-time incident (LTI) to date.

«With the support of Total and our partners, Shams 1 has played a pivotal role in the wider development of the renewable energy sector in the UAE and the region by showing that solar power technology is a viable, reliable and bankable alternative to fossil fuels for power generation,» said Mohamed Jameel Al Ramahi, Chief Executive Officer of Masdar. «Not only that, it is has given other industry players the confidence to enter the market, applying proven renewable energy technologies at scale.»

«Total is proud to be the partner of Masdar in the Shams 1 project and to celebrate its already five years long success story,» said Hatem Nuseibeh, President, Total E & P UAE. «This is an important milestone in the development of renewable energy in the UAE. As a gas and oil major, the most proactive with regard to tomorrow’s energy, Total is committed to assisting the UAE in further diversifying its energy mix to ensure a supply of affordable and clean energy to the region.»

The total power capacity of the renewable energy projects around the world in which Masdar is an investor is nearly 3 gigawatts (GW). Other solar thermal power plants in Masdar’s portfolio include Gemasolar near Seville in Spain, the world’s first utility-scale solar power plant to generate electricity 24 hours a day by combining a central tower receiver system with molten salt storage technology.

Also in Spain, the Valle 1 and 2 power plants use the same parabolic-trough technology as Shams 1 to meet the average power consumption needs of 80,000 homes, roughly the entire residential community of the nearby city of Cadiz.