UAE-based Masdar Institute, a research-driven university focused on advanced energy and sustainable technologies, has developed a high-performance solar absorber that could make solar thermal technologies significantly more efficient and affordable in the country.

Masdar Institute said the novel product, developed in partnership with the Massachusetts Institute of Technology (MIT), absorbs nearly 100 per cent of the sunlight’s energy from the ultraviolet and visible portions of the solar spectrum.

This technological breakthrough could be a boon to the efficiency and affordability of solar thermal applications, such as utility-scale solar thermal power generation, stated the institute, which is part of the Khalifa University of Science and Technology. 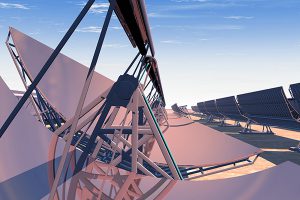 The innovative product features an ultrathin nanocomposite film made of silver and silica, topped with silver nanoparticles, it added.

Dr Steve Griffiths, the vice-president for research at Masdar Institute, said the technology developed through this collaborative research effort demonstrates its commitment to generating innovations that will enable the UAE to achieve its diversified energy goals through sustainable solutions specifically targeted at advancing the energy sector.

«This research is also a testament to the institute’s commitment to scientific rigour and excellence, which produces the intellectual and human capital critical to the country’s knowledge-economy transformation,» he added.

A paper describing the team’s solar absorber was published in the journal Advanced Optical Materials this month.

The UAE is keen on implementing a range of solar technologies, including solar thermal, to help meet sustainability goals that include generating 44 per cent of its electricity from renewable sources by 2050, said the statement from Masdar Institute.

“The technology we have demonstrated is particularly attractive for hot-arid regions, such as Abu Dhabi, with potential applications in waste water treatment, seawater desalination, and power generation,” remarked Dr Chen.

The concentrated solar power (CSP) is a type of technology that generates electricity by concentrating sunlight to heat a working fluid, like oil or water, to produce steam for electrical power generation.

«The hotter the fluid is, the hotter will be the steam and hence the more efficient the power generation. In order to get the fluid as hot as possible, spectrally selective coatings are developed to enable solar absorbers to harness as much sunlight as possible while losing the least amount of energy in the form of infrared thermal radiation,» explained Dr Chen.

Using advanced microscopy tools to investigate the preliminary solar absorber design, the research team made an intriguing discovery about the nanocomposite absorber’s surface, he stated.

With the global CSP market value estimated at $30 billion in 2017 and a cumulative installed capacity that could exceed 24 GW by 2025 – which is nearly five times the current amount – there is a significant market for breakthrough technologies like the one developed through this joint collaboration that promise to reduce CSP system costs and improve power generation efficiencies, it added.

“Transmission electron microscopes enable us to see through the materials, beyond the surface and deep within the nanocomposite solar absorber,” remarked Dr Zhang.

«With this vision, we observed that traditional solar absorbers, thought to be made of smooth, continuous composite layers, were actually filled with tiny nano-particles of each composite element and large nano-particles on the top surface,» he explained.

«We discovered that it is the presence of these topping nano-particles that make absorbers more efficient. This knowledge became the basis for development of our nanocomposite film,» added Dr Zhang.