The ceremony was also attended by several ministers, directors of government departments, ambassadors, consuls, public figures, officials from the public and private sectors, local and international universities, and research centres, and students from national and international universities. The innovative ideas and projects presented by the winners from around the world were highly-praised and commended. 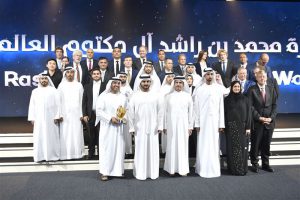 Winners of the Award came from eight countries that included UAE, Qatar, Canada, Switzerland, the Netherlands, Spain, Finland, and Greece

The first place in the Innovative Research and Development Award – National Institutions category, was jointly-shared by Khalifa University for a dual-disinfection-modified biosand filter, coupled with solar pasteuriser system, and Masdar Institute at Khalifa University for a solar desalination process using a perforated black fabric under solar collector.

The first place in the Innovative Research and Development Award – International Institutions category, went to the Netherlands Organization for Applied Scientific Research (TNO), in cooperation with the Qatar General Electricity and Water Corporation (KAHRAMAA), for a solar-powered desalination technology based on TNO’s high-efficiency membrane distillation concept.

The first place in the Innovative Projects Award went to the Elemental Water Makers from the Netherlands, for a solar-powered Reverse Osmosis (RO) plant to produce drinking water.

In his keynote speech, HE Saeed Mohammed Al Tayer, Chairman of the Board of Trustees of Suqia, welcomed the guests to the UAE, the land of peace, happiness, and positivity, and the country of giving that assists all those in need and decreases their suffering, wherever they are, regardless of nationality, race, or religion.

“The UAE was ranked the world’s top development assistance donor in 2016 relative to its national income, according to the Organisation for Economic Co-operation and Development. The UAE has become a centre for helping the needy wherever they are, in adherence with the teachings of Islam, Arab traditions, and the principles instilled in the hearts of Emiratis by the Founding Fathers. Today, our wise leadership, headed by President of the UAE His Highness Sheikh Khalifa bin Zayed Al Nahyan, His Highness Sheikh Mohammed bin Rashid Al Maktoum, and Their Highnesses the Members of the Supreme Council, Rulers of the Emirates, follow the same path,” said Al Tayer.

Al Tayer noted that hundreds of millions of children won’t have access to clean water in the future, and that girls now spend 200 million hours a day collecting water, which affects their education, according to UNICEF. This United Nations agency has warned us that 600 million children will live in areas with severely limited clean-water resources by 2040.

“The Mohammed bin Rashid Al Maktoum Global Water Award, which bears the name of a person whose generosity is not just for the people of the UAE, but also helps those in need anywhere in the world, is another significant milestone in the UAE’s humanitarian efforts. It supports international efforts to provide drinking water to the needy by devising practical and sustainable solutions to water scarcity. At the UAE Water Aid Foundation (Suqia), we are committed to achieving one of the key objectives set by the Mohammed bin Rashid Al Maktoum Global Initiatives foundation, which is to combat poverty and diseases by contributing to finding permanent and sustainable solutions to water scarcity around the world. We do this by conducting research and studies to develop innovative and affordable technologies to help millions of people around the world who suffer from shortages, scarcity, or pollution of drinking water. We are also committed to providing water to millions of disadvantaged and needy people around the world, without discrimination based on race, colour, religion, or culture. In the words of His Highness Sheikh Mohammed bin Rashid Al Maktoum, “UAE Water Aid will not differentiate between one person and another, so are all of our humanitarian works, such as the UAE’s humanitarian mission that lies in helping the afflicted, the needy and disadvantaged people all over the world without any distinction,”” said Al Tayer.

Al Tayer thanked the Emirates Red Crescent (ERC) for its cooperation, noting that Suqia’s work with the ERC has exceeded, the goal set by HH Sheikh Mohammed bin Rashid Al Maktoum when he launched Suqia as an initiative to provide water for five million people around the world. By the end of last year, our projects provided potable clean water to over 8 million people in 19 countries worldwide. Suqia also collaborated with the Ministry of Foreign Affairs and International Cooperation to provide relief to Yemen, benefitting over a million people, according to the Ministry’s report.

“We gather here today to recognise the innovators and winners of the first Mohammed bin Rashid Al Maktoum Global Water Award, which takes place during the Year of Giving. His Highness Sheikh Khalifa bin Zayed Al Nahyan, President of the UAE, has declared 2017 the Year of Giving in the UAE. We were pleased with the high level of interest and size of participation in the award, and impressed by the quality of the innovations from research centres, institutions, and individuals from all over the world. We received 138 applications from 43 countries around the world. We were also pleased with how many young people took part, which reaffirms the role of the UAE as a platform that motivates innovation, an incubator of creativity, and a destination for innovators from all over the world,» added Al Tayer.

“His Highness Sheikh Mohammed bin Rashid Al Maktoum once said that, “We may not live for hundreds of years, but the products of our creativity can leave a legacy long after we are gone.” It’s my pleasure to congratulate the 10 winners of this prestigious award from the UAE, Qatar, Canada, Switzerland, the Netherlands, Spain, Finland, and Greece. Their innovations will improve the lives of millions of people around the world by providing them with clean drinking water. On behalf of UAE Water Aid, we promise our wise leadership to continue our efforts to provide relief to those in need and to find sustainable solutions to these challenges, and achieve positive change globally,” concluded Al Tayer.

The Mohammed bin Rashid Al Maktoum Global Water Award is based on a rigorous assessment process, based on the highest standards and best international practices, to measure the feasibility of projects submitted to achieve the Award’s objectives. They also measure the level of performance and compliance with its basic principles of using innovation and creativity to find environmentally-safe and sustainable solutions for water desalination and purification using solar power.