The inauguration of Shams 1, a 100 MW solar thermal plant, is a major milestone in the development and deployment of renewable energy in the Middle East.

Located in the UAE’s Western Region, in the emirate of Abu Dhabi, Shams 1 was designed and developed by Shams Power Company, a joint venture between Masdar (60 percent), Total (20 percent) and Abengoa Solar (20 percent). With the addition of Shams 1, Masdar’s renewable energy portfolio accounts for almost 68 percent of the Gulf’s renewable energy capacity and nearly 10 percent of the world’s installed CSP capacity.

“Abu Dhabi is investing and incubating a new energy industry, domestically and internationally,” said Dr. Al Jaber. “Through Masdar, the UAE is redefining the role it plays in providing the world with energy. From precious hydrocarbons exports to sophisticated renewable energy systems, we are balancing the energy mix and diversifying our economy – moving toward a more sustainable future. Today, the UAE is the only OPEC nation delivering both hydrocarbons and renewable energy to the international market.” 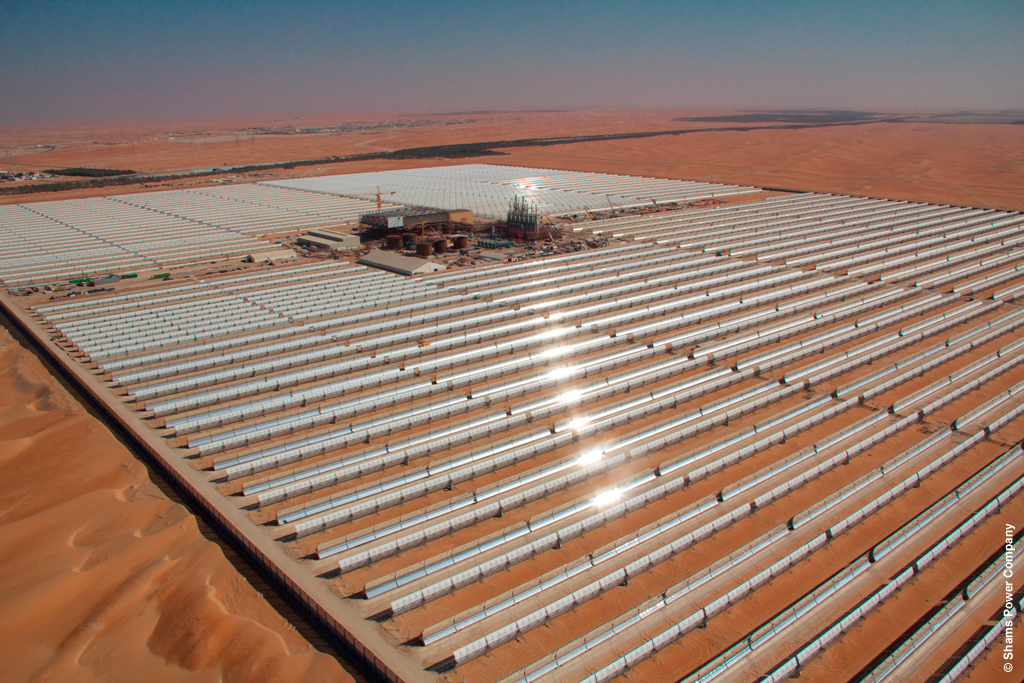 Shams 1 is an example of how collaboration between companies can achieve large-scale, clean-energy solutions that help meet the world’s growing energy demands.

“As a long-lasting partner of Abu Dhabi, we are particularly proud to have been part of the challenging adventure that was Shams 1 construction. This is a major step in the process of transforming the capabilities of solar power in the region,” said Christophe de Margerie, chairman and CEO of Total. “We share Abu Dhabi’s vision that renewables have a promising future alongside fossil energies. Total is today a world leader in solar industry. As such, we are pleased to accompany the Emirate in the diversification of its energy mix.”

Covering an area of 2.5 km², or 285 football fields, Shams 1 generates electricity to power 20,000 homes in the UAE. Also, because solar power is generated during peak demand, the UAE is able to reduce the need for “peak shaving” generators, which are expensive and idle most of the year.

“The Middle East holds nearly half of the world’s renewable energy potential,” said Santiago Seage, CEO of Abengoa Solar. “The abundance of solar energy is an opportunity to integrate sustainable, clean sources of power that address energy security and climate change. The region needs more projects like Shams 1, and we look forward to pushing the boundaries of future energy.”

Incorporating the latest in parabolic trough technology, Shams 1 features more than 258,000 mirrors mounted on 768 tracking parabolic trough collectors. By concentrating heat from direct sunlight onto oil-filled pipes, Shams 1produces steam, which drives a turbine and generates electricity. In addition, the solar project uses a booster to heat steam as it enters the turbine to dramatically increase the cycle’s efficiency. The project also includes a dry-cooling system that significantly reduces water consumption – a critical advantage in the arid desert of western Abu Dhabi.

A source of great pride, the Western Region of Abu Dhabi is the centre of the country’s hydrocarbon industry and represents the roots of its Bedouin heritage. With the addition of Shams 1, the region is evolving. Today, alongside oil fields, renewable energy and civil nuclear power is being developed to support the country’s long-term energy requirements.