The Middle East and North Africa (Mena) region is embarking on a massive programme to develop renewable energy, that will require more than $200 billion in investment, a report said.

More than 67GW of clean energy projects at various stages of the design and study stage, according to Renewable Energy in the Mena Region 2017, a new report from business intelligence service Meed.

Unsurprisingly due to the region’s significant hydrocarbon reserves, the Middle East has been slow to adopt renewable energy. However, this has started to change significantly over the past five years. In 2013, the UAE emirate of Abu Dhabi commissioned the region’s first utility scale solar plant, 100MW Shams 1 concentrated solar power (CSP) plant.

Since then, the dramatic fall in the cost of photovoltaic (PV) solar has resulted in regional utilities launching some of the world’s largest solar projects, which have been supported by the submission of record low tariffs.

In the 12 countries covered in-depth by the report, total installed generating capacity in 2015 was 271,761MW, with just over 7 per cent of this coming from renewable energy capacity. However, the vast majority of this capacity is hydropower, with only Morocco in North Africa and Abu Dhabi and Dubai in UAE having commissioned solar projects with capacities greater than 100MW. 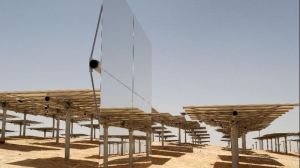 This is set to change significantly in the coming years, with the record-low tariffs being achieved for utility-scale renewables projects throughout the region changing the perceptions of governments and utilities towards renewable energy. From almost an absence of renewable energy 10 years ago, almost all of the 12 countries analysed in the report have some form of renewable energy targets.

Meed’s latest provides a detailed breakdown and country-by-country analysis of renewable energy targets and planned projects along with clients and key players in each market.

While the favourable conditions for implementing renewable energy in the Mena region have long been known, the push from governments to shore up energy security through diversification of fuel for power generation and the falling cost of technologies is driving the push towards major clean energy programmes.

A key driver behind the push for energy diversification in the Mena region is the sharp growth in demand for gas. With increased efficiency and lower emissions than other fossil fuels, gas has become the favoured fuel for power generation across the region over the past two decades.

However, with the exception of Qatar, all of the GCC states are facing a tight gas market, with competing demands from oil, industrial and utility sectors. Outside the GCC, Jordan has been hit by a rising energy import bill in recent years as it has been forced to increase the use of oil due to the decline of natural gas supplies from Egypt. In North Africa, Egypt has also turned to LNG imports and Morocco is planning an ambitious $4.6 billion gas-to-power project to boost gas supplies and generation capacity.

The fall in oil price has resulted in an increased drive for private sector participation in the region’s utilities markets. The move towards the independent power producer (IPP) and independent water and power producer (IWPP) model has enabled some of the largest international developers to bid competitively and submit some of the lowest prices in the world for renewable energy projects.

Although competitively tendered IPP projects will continue to drive the region’s largest renewable projects, some of the region’s less wealthy governments have been implementing alternative frameworks and policies to kickstart renewable energy programmes on a smaller scale. The implementation of a well-structured feed-in-tariff (FiT) programme) in Jordan has allowed Amman to develop significant renewable energy capacity with cost effective tariffs.

While much of the focus of the region’s renewables market to date has been on large-scale utility solar and wind projects, if the region is to achieve some of its most ambitious long term goals the successful deployment of small-scale renewable initiatives is vital. Meed’s latest report analyses plans and initiatives for rooftop solar and offgrid solar initiatives throughout the region.

Covering 12 countries, Meed’s latest Renewable Energy in the Mena region 2017 report explains the structure of the renewables market in each geography, the key government actors driving investment in the sector, existing capacity, projects planned and underway and incentives for investing in renewables.