An international consortium led by the DLR Institute of Solar Research, will build and operate a solar thermal molten salt parabolic trough test facility in Évora (Portugal). Members of the consortium are the German companies TSK Flagsol Engineering, eltherm, Yara, and Steinmüller Engineering, the South African energy provider Eskom and the Portuguese University of Évora. 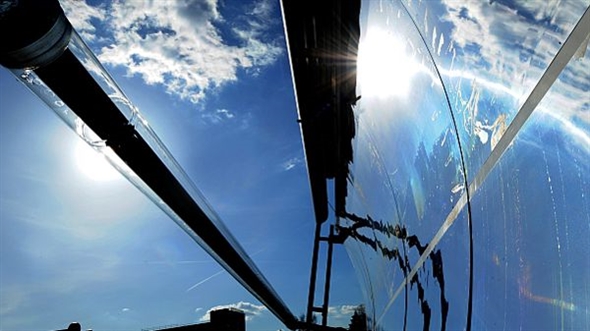 Solar radiation – heat – electricity
In a parabolic trough power plant curved mirrors concentrate solar radiation onto the absorber tubes in which circulates a heat transfer medium. This absorbs the heat of solar radiation and passes it further to a power block. As in a conventional power plant process, the heat converts water into steam, which drives a turbine to generate electricity.
A unique feature of solar thermal power plants is the option to integrate a cost-efficient thermal storage which allows to produce electricity on demand, for instance even after sunset.
Molten salt: lower costs and higher efficiency
The aim of the research project under the leadership of DLR is to examine the efficiency and reliability of parabolic trough power plants with molten salt as heat transfer medium. To date, commercial parabolic trough power plants use thermal oils for receiving and transferring the high-temperature heat generated from solar radiation. Compared to thermal oil, the advantage of salt is its lower procurement cost and the higher maximum temperature to which the salt can be heated. 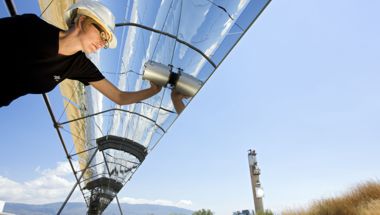 «A key advantage of the molten salt is its good resistance at high temperatures,» says Project Manager, Dr. Michael Wittmann from DLR «For the thermal oil a temperature of 400 degrees Celsius is the limit. But the salt withstands temperatures above 500 degrees in continuous use. Depending on the salt mixture upper process temperatures of up to 560 degrees are possible.»
In an innovatively designed once-through steam generator, the salt transfers its energy to a connected water-steam cycle. The compared to state-of-the-art technology elevated steam parameters allow higher efficiencies of the power plant unit. In addition, the once-through principle allows supercritical steam parameters for commercial application.
Salt can be used in parabolic trough power plants not only as a heat transfer medium. Already existing solar power plants use huge tanks with molten salt as thermal heat storage. Such power plants run with a two-circuit system with synthetic oil in the collector field and liquid salt in the storage system. Where salt is used as storage and also as carrier medium, a two-circuit system is no longer necessary. This leads to a reduction in system complexity and investment.
The project partners optimize the system for operation with salt
The components and the overall system of the new test facility in Évora are specially adapted to the use of molten salt as heat transfer medium.
The biggest challenge of using salt is its high melting or solidifying temperature. For safe operation the solidification in the branched pipes of a solar field must be prevented. Therefore an adequate design, an adapted operating concept and appropriate safety equipment is needed.
DLR participates in the planning and conceptual design of the test facility as well as the qualification of the collector field. DLR researchers will accompany the experimental operation also scientifically.
The use of molten salt places high demands on the design of the collector. TSK Flagsol Engineering will adapt the design of its HelioTrough® collector accordingly and will demonstrate its applicability.
Due to high concentration factors the collector is especially suited for being operated at high temperatures and hence for the use of molten salt. Eltherm develops the safety relevant solar field impedance heating system and is as well responsible for its construction and proof of operation.
Steinmüller Engineering installs and tests on the new facility its once-through steam generator, heated with molten salt.
Yara develops the required salt process technology and demonstrates the suitability of its low-melting ternary salt.
A team of engineers of the South African energy supplier Eskom is responsible for the smooth operation of the plant.
The University of Évora as the owner of the Évora Molten Salt Platform supports the erection and operation of the infrastructure with dedicated operational and scientific staff.
The research project «High Performance Solar 2 (HPS2)» is funded by the German Federal Ministry of Economic Affairs and  Energy and accompanied by the Project Management Jülich (PTJ).
Jose Santamarta2017-01-13T14:54:18+00:0013-01-2017|Categorías: BREAKING NEWS, NEWS, Sin categoría, Storage, Top News|Etiquetas: Concentrated Solar Power, DLR Institute of Solar research, electricity. costs, Flagsol, Molten Salt, Parabolic Trough, solar thermal, thermal oil, TSK, TSK Flagsol|