Efforts by the North African country to tap into the potential offered by renewable energy should be replicated at EU level, according to the head of a successful Moroccan energy agency.

So successful has the country been in meeting its electricity needs that it has easily exceeded it’s planned 35 per cent renewable energy target and has now set itself a new target of 52 per cent by the year 2030.

Speaking in Brussels on Wednesday, Mustapha Bakhouri, president of the Moroccan Agency for Sustainable Energy (MASEN) said, “The aim of course is to produce energy and electricity in as sustainable way as possible.” 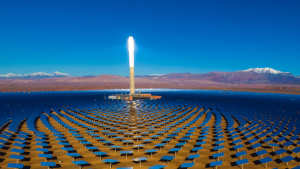 “But it is also about creating an [energy-related] eco-system and improving the well-being of our citizens.” He added.

MASEN is a privately-owned company with public funding. It was created in 2010 to develop the country’s solar energy ambitions and to generate electricity from solar and wind sources. The agency develops integrated energy projects under an agreement with the Moroccan state.

It runs Morocco’s Noor Ouarzazate plant, located in the south of the country and said to be the largest concentrated solar power plant in the world

In 2016, MASEN’s remit was extended to encompass all renewable energy sources, mostly chiefly solar, wind and hydropower, and its goal is to achieve a minimum installed capacity of 3000 MW by 2020 and 6000 MW by 2030. A typical EU coal power plant produces about 600 MW.

Bakhouri’s visit to Brussels to promote renewables comes in the wake of his participation at the UN climate action summit last month.

Addressing journalists, he highlighted what he called the twin challenges of meeting increasing energy demand while fighting climate change. On this, he said, “We are leading the way in Morocco’s renewable energy sector.”

In a briefing on MASEN’s work, Bakhouri explained that the country had, about ten years ago, set out a far-reaching policy designed to wean itself off of its then-dependency on fossil fuels.

The policy, he noted, also aimed to address the impact and results of climate change which, he added, Morocco witnesses on a “daily basis.”

“Three years ago,”, we asked ourselves, “Are we meeting our energy targets?” said Bakhouri, adding, “The answer was yes.”

“We also asked: is there more we can do? The answer to this was also yes.”

The outcome was the setting up of the ambitious 52 per cent by 2030 s target for renewables. “We are confident we will also reach this target.”

The Noor Ouarzazate site, part funded by the private sector and what are known as “green bonds”, helps save “tens of thousands” of CO2 emissions every year and generates enough energy to meet the needs of a city the size of Casablanca

Noor Ouarzazate is, he said, an example of how renewables can help address the energy crisis and bring other benefits, such as job creation and infrastructure improvements to services such as water supply and sewage. The plant employs over 2000 people, 30 per cent of whom are local.

“This is where the eco system comes in,” he said. This particular site and the agency’s work on sustainable energy are, said Bakhouri, a “shining example” for Europe and the rest of Africa, a region he said that is often portrayed as being “less developed”.

He commented, “It is also worth noting that what we are doing in Morocco on renewables today is a great source of pride to local people as well, now and in the future.”

The installation of a new European commission college was, he said, an “encouraging sign” as Commission president-elect Ursula von der Leyen, has emphasised the importance of tackling climate change and environmental issues.

“Support from the EU is important for us and we look forward to further cooperation,” he said.