The Moroccan Agency for Solar Energy (MASEN) has shortlisted 5 consortia to bid for the phase 1 of the 800 MW Noor Midelt solar power complex. Noor Midelt is the first complex that specifies hybrid plants including both CSP and PV. Total capacity is expected to reach 400 MW, of which 150 to 190 MW would be provided by CSP with with minimum of 5 hours storage.
The consortiums officially pre-qualified are:

The tender process was launched In July, 2016.By the deadline in November 2016, 7 applicants have submitted their proposals and Masen last week announced five consortia are officially pre-qualified. MASEN will shortly start the next stage of the tender process issuing the Request of Proposals (RFP) to the consortia. 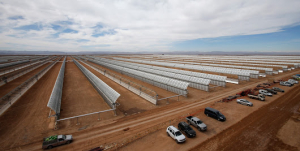 The first phase of Noor Midelt is expected to consist of two hybrid concentrated solar power (CSP) and photovoltaic (PV) plants. The capacity of the PV component is left to the bidders’ discretion, but cannot exceed the night-time net capacity from CSP by more than 20%. By design, about 3,000 hectares, some 25 kilometers to the northeast of Midelt, have been zoned for the installation of hybrid plants.

The Noor Midelt project is one of the initiatives under the Noor Solar Plan, which aims at producing a total capacity of 2,000 MW by 2020, 680 MW of which have already been successfully launched in Ouarzazate, Laayoune and Boujdour.

Morocco broke ground on its 70 MW Noor Ouarzazate IV PV plant earlier this April, which is the PV portion of the 580 MW Ouarzazate Solar Power Station (OSPS). The OSPS complex consists of three CSP plants and one PV plant. The three CSP plant project (510MW in total) is also the world largest CSP complex. It includes 160 MW Noor 1 CSP parabolic trough plant, which was completed in February 2016, and 200MW Noor 2 CSP parabolic trough plant and 150MW Noor 3 CSP tower plant, which are currently under development, and have reached a completion rate of 76% and 74% respectively. The Noor Ouarzazate IV PV project is scheduled for completion in the first quarter of 2018, while the 580 MW Ouarzazate solar complex is expected to be finalized by 2020.

Deep discussions on Morocco’s CSP market and Noor complex will among the key topics during CSP Focus MENA 2017 conference on Sept.13-14 in Dubai. Click to get the event brochure.