Morocco, with the world’s largest concentrated solar power plant, among the leaders in renewable energy

Morocco, with the world’s largest concentrated solar power plant, among the leaders in renewable energy

Africa, and especially its northern part with the Sahara desert, has a huge solar capacity, which has been pointed out for a long time, but which was still underutilized. They have been trying to change this for some time in Morocco and thus shake off the dependence on the import of fossil fuels for the production of electricity, where the needs have doubled since 2010 and will only increase in the future. As they say in Morocco, they want to become with solar energy what Saudi Arabia is with oil. 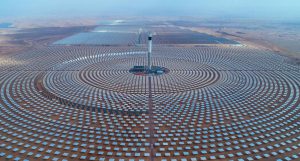 Even at the beginning of this century, renewable sources had only an insignificant share in the production of energy in Morocco, which then set itself an ambitious energy plan to become the leading producer of clean energy in the area and also in the world by exploiting the abundance of sun and wind.

Although, according to the national energy strategy adopted in 2009, they did not reach the goal of a 42% share of renewable energy sources in the total energy production capacity by 2020, as they stopped at 37%, they still want to fulfill plans in the following periods to increase this percentage to in 2030 amounted to 52 percent, by 2040 already 70 percent and by 2050 landed at 80 percent.

In order to achieve the set goals, they embarked on large-scale renewable resource projects, the most prominent of which is the Nur solar power plant near the city of Ouarzazate on the edge of the Sahara in the central part of the country, which, with a capacity of 510 MW, is also the largest concentrated solar thermal power plant (CSP) in the world.

More expensive technology, but the possibility of energy storage

In contrast to much more widespread photovoltaic systems, where solar collectors convert solar radiation into electrical current, in the CSP system, using mirrors or lenses, the solar energy is redirected to a smaller receiving point, where the energy is transformed into heat that drives the heat engine, most often for a steam turbine, which then produces electricity similarly to a classic thermal power plant.

Compared to increasingly cheaper and more accessible photovoltaic panels, concentrated solar power plants are much more expensive, but their advantage is energy storage, so they can produce electricity even at night, since the juicy energy is used to heat a salt solution, usually sodium or potassium nitrate, which keeps heat for a long time and it can run the heat engine even when there is no sun.

The Nur solar power plant, which means light in Arabic, extends over 3,000 hectares and is divided into four phases, three of which are concentrated solar power plants, and in the fourth phase a classic photovoltaic power plant with solar collectors will be built, which will be 510 MW added 72 MW of additional power to the power of the first three. With a total power of more than 580 MW, Nur will be able to supply more than two million inhabitants with clean energy and also enable the export of electricity.

Nur I and II are concentrated solar power plants that operate on parabolic trough technology, which are rounded mirrors that follow the sun and direct its light into a receiver, with tubes running along the focal point through which the salt is heated. melt in large cylinders. During the day, the melt heats up to 400 degrees Celsius and can continue to emit heat for three hours after sunset, making it possible to generate electricity even in the evening hours. When the melt gives off its heat to heat the thermal machine, it is again ready to be heated in the receiver tube on the mirrors.

Nur III uses solar tower technology, around which around seven thousand tennis court-sized tracking mirrors of heliostats are mounted in a circle on individual ten-meter-high pillars, which direct sunlight into a heat receiver on top of a 250-meter-high tower. The salt melt in the tower is heated to between 500 and 1000 degrees Celsius with the help of mirrors, which enables energy to be stored even longer than with parabolic troughs and can produce electricity for seven hours after the sun goes down.

A consortium of companies led by the Saudi company ACWA Power was selected for the development of the project, while the Moroccan Agency for Sustainable Energy (Masen) oversees the implementation, which obtained funds from the state and foreign investors. Among them, the African Development Bank, the Clean Technology Fund, the World Bank and the European Investment Bank contributed a significant share of loans.

The downside to concentrated solar power plants is the need to use large amounts of water to cool the system and clean the mirrors, which is a problem in arid areas such as Morocco, which is particularly vulnerable to the effects of climate change due to its location.

According to projections from the United Nations Development Program, Morocco can expect an increase in temperature between two and five degrees Celsius by the end of this century, while the amount of precipitation is expected to decrease by 20 to 30 percent. This puts a lot of pressure on the country’s water resources, which are already heavily exploited for intensive agriculture and industry.

In order to overcome dry periods, many dams were built in the past, which provide water supply even in the event of a water shortage. The Mansour Eddhabi dam was also built for the Nur solar power plant, where water flows from the surrounding valleys and is pumped from it to the power plant. This year’s high temperatures and catastrophic drought have not spared even Morocco, as the water level in the dam is 12 percent below its current capacity, which could pose problems if another dry period follows next year.

In order to overcome the problems with the lack of water and to reduce its consumption for the operation of the Nur power plant, a dry cooling system was chosen for the second and third phases, as opposed to the first phase.

According to her, the government is working towards 100% coverage of the population with electricity from the current 99.4%, as it wants every school, mosque and home to have electricity. She emphasized that Nur is not the only renewable energy project, as 52 of them are currently operating, and another 59 are planned or under construction. So far, Morocco has committed $5.2 billion to solar-related projects, including the Nur solar power plant.

The commitment to green energy sources is already paying off for Morocco, as last year it ranked just behind Denmark, Sweden, Norway and the United Kingdom in the Climate Change Performance Index (CCPI).

Morocco does not intend to stop only at satisfying its own needs for electricity and ensuring a reliable supply, but also intends to supply it to other countries in North Africa and also to Europe, with which it is already connected by two submarine cables, and the installation of a third is also planned .

One of the major sustainable energy projects that Morocco plans to undertake is an electrical connection with the United Kingdom. According to the Morocco World News portal, the estimated value of the Xlinks project is almost 22 billion dollars, which will include a solar power plant with a capacity of 7 GW and a wind power plant with a capacity of 3.5 GW together with battery energy storage.

A solar and wind farm in the south of Morocco will be connected to the United Kingdom by a 3,800-kilometer submarine cable, which is said to be the longest in the world and would meet more than seven percent of Britain’s electricity needs.