Morocco is playing an important role in Africa’s energy transition with the Noor Ouarzazate solar complex, according to a June 18 report by African Development Bank (AfDB) Group. The complex, southeast of Marrakech, is the largest concentrated solar power (CSP) plant in the world and its development benefited from $485 million in AfDB funding.

The project provides Moroccans with energy while preserving the environment, helping to lay the foundation for AfDB’s strategic priority of “more inclusive and greener growth on the [African] continent,” the group wrote on its official website. 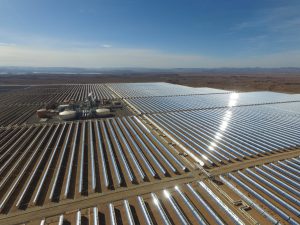 Morocco is making strides to address this challenge. The North African country aims to source 52% of its energy from renewables by 2030. Morocco is continuing efforts to diversify its energy mix and ramp up its green energy production by expanding its wind, hydraulic, and solar infrastructure.

Morocco announced in 2018 it sourced 35% of the country’s electricity from renewable sources, aiming to reach 45% by the end of 2020.

The country is widely recognized as a renewables leader not only in Africa, but worldwide. The 2019 Climate Change Performance Index (CCPI) ranked Morocco second globally and first in Africa and the MENA region. The evaluation considers the criteria of greenhouse gas (GHG) emissions, renewable energy, energy use, and climate policy.

According to June 2020 Climate Action Tracker statistics, Morocco and the Gambia are the only two countries in the world on track to curb emissions to the 1.5°C limit urged by the Paris Agreement and the UN’s Intergovernmental Panel on Climate Change (IPCC).

Morocco launched the Moroccan Solar Programme (NOOR, which is Arabic for “light”) in 2009, planning to source a minimum of 2,000 megawatts from solar facilities by 2020. The Ouarzazate complex currently has a capacity of 580 megawatts spread over four plants, AfDB noted.

Within the framework of a public-private partnership (PPP), AfDB also mobilized $285 million to help finance the initial development phases of the NOOR Midelt solar projects.

Upon completion, the NOOR Midelt I and II CSP plants will together produce 800 megawatts with a five-hour energy storage capacity. This would provide energy to more than two million Moroccans, or 6% of the country’s population.

The Moroccan Agency for Sustainable Energy (MASEN) has expressed confidence in the project, saying in a May 2019 press release that the complex is technologically disruptive, a clean energy game-changer: “There will be, in the world, a before/after Midelt, in the same way there was a before/after Ouarzazate.”

One of the greatest technical challenges to solar electricity provision is energy storage. Advanced energy storage would allow the dissemination of solar power generated during the day to consumers during the night. Another PPP party, Swedish company Azelio, has undertaken a project to meet this challenge.

Azelio inaugurated a storage facility at NOOR Ouarzazate on March 6. The system is scalable up to 100 megawatts. It advances the goal of providing universal access to affordable and sustainable energy, Azelio emphasized upon the project’s inauguration.