Morocco is following in Chile’s footsteps with two new solar hybrid complexes that will maximize synergies and optimize the cost per kilowatt hour.

The first of these independent power projects, Noor Midelt, is envisioned as a solar power complex with a total installed capacity of 400 MW, utilizing 80–85% CSP and 15–20% PV.

Noor Tata, the second solar hybrid complex, will also have a capacity of around 400 MW and will be located between Midelt and Ouarzazate. 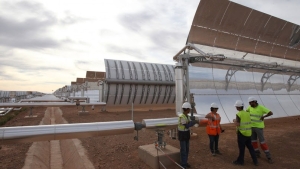 The Moroccan Agency for Solar Energy (MASEN) will invite expressions of interest for this project this year, Nadia Taobane, project development director at MASEN said during the CSP Today Sevilla conference last November.

MASEN called for expressions of interest for Noor Midelt on 31 December 2015 and has already secured financing from German development bank KfW, which pledged to lend the agency €400 million ($428m) for the construction of the solar complex.

The project is expected to be awarded in the second half of 2017, with financial closure by early 2018.

Saudi Arabia’s ACWA Power has already offered competitive tariffs for PV and CSP projects. ACWA Power is behind the winning bid of $5.98 cents/kWh for Dubai’s 200 MW PV plant and offers for the Noor II and Noor III CSP projects, at around $0.14 cents/kWh and $0.15 cents/kWh, respectively, landed the developer both contracts in Morocco last year.

The SSP is currently being employed at the Atacama-1 complex in Chile, which comprises a 110 MW CSP tower, a 100 MW PV plant, and 17.5 hours of molten salt thermal storage.

“Personally, we do not believe that in the short term we’ll see battery systems able to economically provide storage capacities of 17 hours as we will in Chile – but we believe that molten salt storage systems are ideal for that,” Michael Geyer, managing director of Abengoa Solar, said.

“I think in the future we will see more plants that combine storage and solar thermal elements with PV. With such combinations, you can cover typical loads in MENA countries,” he said.

According to MASEN, the hybrid concept was chosen to “increase the electricity availability after sunset while providing a low-cost solution for daytime generation”.

The agency will buy the electricity at the successful bid price before selling it on to ONEE, the Moroccan utility company.

CSP technology with storage will offer ONEE significant flexibility through large-scale dispatchable plants, enabling it to better meet its peak demand after sunset.

While CSP benefits from dispatchability and can generate power with utility cycles, PV has the advantage of lower costs, shorter construction times and modularity, Geyer said.

A Chile-focused study on solar hybrids by Sweden’s KTH School of Industrial Engineering & Management found that CSP-PV integration reduces the levelized cost of electricity of stand-alone CSP and hybrid PV-diesel, by 35% and 46%, respectively.

According to the analysis published in August 2015, it is more cost-efficient for a CSP-PV plant to operate on a baseload type profile, in comparison to stand-alone CSP or hybrid PV-diesel.

“The anticipated advantages of using a combination of CSP and PV, beyond the synergies of operating a large capacity of solar technology on the same complex and optimizing the operation and maintenance costs, will be to capture the dispatchability of CSP with storage,” Driss Berraho, assistant business developer at ACWA Power, said.

A combination of CSP and PV will allow the production of electricity to cover evening peak hours, with PV providing coverage for midday peak hours during summer months, when solar PV electricity generation is at its highest, Berraho said.

Like Chile, Morocco lacks domestic fossil fuel resources and has vast solar resources and expansive land areas. The site of Noor Midelt, for example, receives an annual direct normal irradiance of around 2,360 kWh per square meter.

Spain’s ACS-Cobra is also working with a number of European firms on new hybrid plant designs. ACS-Cobra has been working on the CSP Hysol project since 2013, with the goal of developing an innovative configuration of a fully renewable hybrid CSP plant. The project, which has a budget of 9.2 million euros and involves eight European companies and research centres, entered the demonstration phase in 2015.

“The idea was to combine CSP with PV in the same location and with the same evacuation system,” José Nebrera, CEO of ACS Industrial Services said.

“We believe that this is going to be the future of CSP technology,” Nebrera said.