The Brahmakumaris in Mt Abu have installed an innovative 1 MW solar thermal power plant. Surprisingly, it has done away with photovoltaic cells, and runs on water instead. What’s more, it can store sun’s energy overnight and deliver power on demand.

Spread over an area of 25 acres, the power plant is called ‘India One’ and is located at Shantivan Campus of the Brahmakumaris on Abu Road, Mt Abu. 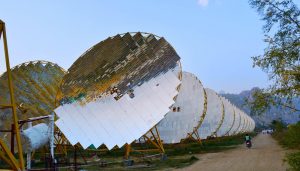 It is the biggest power plant in the country to work on ‘concentrated solar thermal power technology’, which was inaugurated recently.

The plant is jointly funded by the Indian and German governments which uses 770 newly developed parabolic reflective dishes, each one with an area of 60 sq metres. They facilitate thermal storage for continuous operation. The plant has a capacity to generate enough heat and power for a campus of 25,000 people and is a milestone for decentralized and clean power generation in India. The India One team consists of about 50 engineers, project support staff and dedicated volunteers coordinating the project on the site.

«Brahmakumaris have been the largest user of the solar energy for years. We have been using modular solar steam cooking system of 24 Scheffler dishes, solar hot water system since mid-90s. Five years ago, we came up with the idea of solar thermal plant. In this plant, everything from conception to fabrication, manufacturing and installation of the dishes, has been done in-house with the help of Yogi volunteers of Brahmakumaris,» says Golo Pilz, the head of the project. Pilz, a German national, has been living in India for past 20 years and practising meditation for nearly 30 years now.

The solar thermal power plant is based on three key technologies. Parabolic reflectors, thermal storage and rankine cycle. The 60-sq metre dishes focus the solar rays towards the in-house cavity receiver which is made of iron casting and, thus, provides excellent thermal storage. «The heat exchanger coil is connected to the thermal storage and allows for an improved heat transfer. Good insulation and automated shutter avoid substantial energy losses at night or in cloudy conditions. The thermal storage operates between 250C to 450C and can be discharged on demand. By means of the total thermal mass, the capacity will be sufficient to run the turbine round-the-clock,» says Jayasimha Rathod, CEO, India One.

«The uniqueness of the project is that 90% of the components used in it are made in India. Except for the turbine generator, which is not made in India and has been imported from Germany, and the special reflector glass, from US, everything is indigenous,» Rathod said.

‘India One’ is implemented by World Renewable Spiritual Trust (WRST), a public charity trust, with partial funding from the Indian Ministry of New and Renewable Energy (MNRE) and the German Ministry for the Environment, Nature Conservation, Building and Nuclear Safety (BMUB) through the German Federal Enterprise for International Cooperation (GIZ).

A training centre sponsored by UN Development Programme (UNDP), Global Environment Facility (GEF) and MNRE for the promotion of solar concentrating technologies has been set up at ‘India One’ where people from far and wide come to see the magic of solar power.

Key Features of India One

. 770 parabolic reflective dishes, each one with an area of 60 sq metres