A multiscale numerical approach is applied to an open volumetric air receiver.
A 3D CFD study at the micro-scale (single channel) feeds the meso-scale model.
he macro-scale model is a lumped-parameter model of the full receiver. 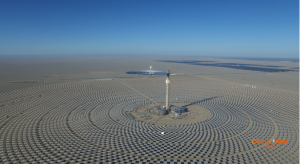 The results from the receiver model are compared with the SolAir200 experiment.
Effect of the ARR and heat flux distribution studied using the receiver model.
The ability of the receiver model to simulate transient scenarios is proved.
Open volumetric air receivers (OVARs) are an interesting Concentrated Solar Power (CSP) technology, due to the high temperature that can be reached by the heat transfer fluid (air at ambient pressure), leading to high efficiency of the power cycle.

In this paper, a novel multiscale and modular computational approach is proposed and applied to the analysis of a conventional OVAR, consisting of several honeycomb cups, each including a large number of parallel prismatic channels. The methodology proposed in this work consists in scaling-up the receiver numerical model, from the single channel (micro-scale), through the cup (meso-scale), to the whole receiver (macro-scale), exploiting the results obtained at the micro-scale to characterize the model applicable at the meso-scale, which is then used to modularly generate the model at the macro-scale.
The rationale of the multi-scale approach is to take into account at each scale the most relevant phenomena that affect the receiver performance at that scale, which cannot be considered in detail at larger scales. Starting from the thermal-hydraulic characterization at the micro-scale, obtained by means of a detailed 3D CFD model of the generic (single) channel, the meso-scale problem is addressed introducing an equivalent 1D porous medium model for the generic cup, implemented in the Modelica environment. The latter model is finally exploited to assemble a macro-scale model able to describe the entire receiver behavior, considering also the return air flow that laps the lateral walls of the cups.
The receiver macro-scale model has been preliminarily compared with the data collected during the SolAir 200 experimental campaign, conducted at the PSA in the early 2000s, demonstrating that the model developed here provides credible results.
A first application of the developed multi-scale model is also presented, in order to demonstrate the potential of this approach. The results from this analysis are discussed, underlining the influence of the phenomena that affect the receiver performance at the different scales.
Particularly, the effect of the return air flow is investigated, as well as the effect of a non-uniform solar heat flux distribution. In the latter case, the model has been used to calibrate the opening of the orifices installed at the cup rear side to regulate the mass flow rate among the cups forcing an almost uniform air outlet temperature.
Moreover, the full receiver model is applied to a simple transient scenario consisting of a fast passing cloud, proving the ability of the model to simulate dynamic conditions in a reasonable way.