The large-scale and renewable production of hydrogen could soon be possible thanks to a new photoelectrochemical device that is driven by concentrated sunlight. When scaled-up, the technology could revolutionize how hydrogen is produced and make the gas a viable alternative to fossil fuels. 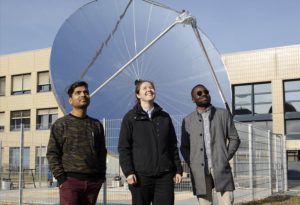 Sunlight and water are both in great abundance on Earth so using light to split water molecules to create hydrogen fuel has great potential for creating a clean and renewable energy source. Now mechanical engineers at the Swiss Federal Institute of Technology in Lausanne (EPFL), led by Sophia Haussener, have created an electrochemical device that uses concentrated solar radiation to create hydrogen fuel from water with no undesirable byproducts.

The demonstrator device can be held in one hand and consists of a triple junction tandem photovoltaic cell (or photoabsorber) that is integrated directly with an electrochemical cell that incorporates catalysts. Water performs two functions in the device: it is both a reactant and a cooling agent that controls the temperature of the photoabsorber. The dissipated heat also finds a use – it enhances the rate of the catalytic reaction.

Innovative use of heat

“Using water with a double purpose is the specialty and the real innovation [of the device],” says Haussener. “The water first flows across the photoabsorber, is heated up by cooling the photoabsorber and then drops to the backside, where the higher temperature electrochemical reaction takes place,” she explains.

Concentrated sunlight strikes the device, creating electron-hole pairs. After separation, the holes are used to drive anodic oxygen evolution, whereas the electrons drive cathodic hydrogen evolution. Commercially-available catalysts support and enhance the reaction rate. The device was tested under lab conditions, where it operated under concentrated artificial solar irradiation originating from lamps with an intensity up to 474 kWm−2.

Concentrating sunlight instead of using more photoabsorber and catalyst materials limits the overall size and cost of the system – thus reducing its environmental impact and the cost of the produced hydrogen.

However, making hydrogen this way is not yet commercially competitive with producing the gas from fossil fuels, explains Haussener. “Initially, [hydrogen production] will be more expensive than what is currently being produced by a non-renewable way of steam reforming of natural gas,” she says. “The price difference will not be orders of magnitude, but rather two to four times more expensive.”

Even at a higher production cost, there are several reasons why solar hydrogen could be attractive. It can be made on-demand and on-site, for example, thus eliminating costs associated with transportation and long-term storage. The process also delivers hydrogen at a very high purity.

The system itself has some important limitations. Deionized water must be used as the reactant, for example and the researches reckon that the catalyst must be replaced every four years.

While the amount of hydrogen produced by the lab-scale demonstration is rather modest, only tens of milligrams per minute are formed, the team is developing a scaled-up version that should produce nearly one kilogram per day – depending on the local solar flux.

This larger version is being built outdoors and uses a parabolic mirror with a diameter of 7 m to concentrate the solar radiation by a factor of 1000 (see figure). “The dish is already installed at the EPFL campus and we are finalizing the installation of the reactor, which is the core piece of the whole system,” says Haussener, adding “We hope that in the next two to three months the system might be inaugurated”. A start-up company called SOH-Hytec is working towards commercializing the technology.

Artur Braun at EMPA, the Swiss materials science and technology lab, says “the concentration of solar energy by using focusing mirrors brings an economical advantage because a large area of projected solar light can be collected cheaply and then focused on a small photoelectrochemical reactor”. Braun, who was not involved in the development of the device adds, “The other advantage [of the device] is that it uses the thermal energy from the Sun, which is typically not used in solar photovoltaic and solar photoelectrochemical reactors”. As a result he says the system should be “seriously considered as one additional alternative for solar hydrogen fuel production”.

The new device is described in Nature Energy.