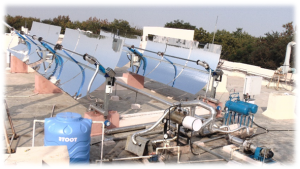 For the uninitiated, Concentrated Solar Thermal (CST) technologies use mirrors to reflect and concentrate sunlight onto a receiver. The energy from the concentrated sunlight heats a high temperature fluid in the receiver. This heat – also known as thermal energy – can be used to spin a turbine or power an engine to generate electricity.

The facility set up by the International Advanced Research Centre for Powder Metallurgy and New Materials (ARCI), an autonomous institute of the Department of Science & Technology (DST), will validate solar thermal components such as solar receiver tubes, heat transfer fluids, concentrating mirrors, and AR coated glass tubes, etc. of the CST system in field conditions.

In this regard, ARCI is working on the development of cost-effective solar receiver tubes, anti-reflective (AR) coated glass covers, nanostructured material-based thermic fluids, and durable reflective mirrors to enhance the performance and cutting down the cost of the solar thermal systems in India.

Apart from the development, the testing and validation of the components in real-field conditions are critical for the deployment of solar thermal technology. In order to cater to this need, ARCI has established a concentrated solar thermal-based single-axis parabolic trough test rig facility sponsored by the Technology Research Centre (TRC) project, DST, Govt. of India.

The parabolic-trough test rig facility has features for simultaneous testing of standard and indigenous solar receiver tubes. It has a thermic fluid-based closed-loop system which can operate between 50 to 350°C temperature range. It can conduct heat gain studies in real-field conditions with the actual measurement of solar irradiance condition and has an electrical heater support for measuring the actual heat loss of solar receivers at different operating temperatures.