ACCIONA took part in the design and construction of the Noor I CSP plant  (160 MW) that is part of this complex in the province of Ouarzazate, Morocco. 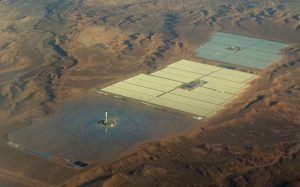 The Noor Ouarzazate energy complex, which includes the Noor I CSP plant that was designed and constructed by ACCIONA together with its partners Sener and TSK, has been recognised as one of the 10 most influential renewable energy projects, according to the Project Management Institute (PMI).

This acknowledgment forms part of the activities to celebrate the 50th anniversary of the PMI and is intended to recognise the positive impact that these projects have had at an international level, as well as the important role played by project management over the last five decades.

The Noor I CSP plant came into operation in 2016 and is located near the city of Ouarzazate, known as the door to the Sahara Desert at the foot of the Atlas Mountains. The location leverages the advantages of the excellent local solar and environmental conditions.

It has an installed capacity of 160 MWe, an approximate initial investment of €500 million and helps to contribute to Morocco’s target of generating 52% of its energy mix from renewable sources by 2030.

It uses parabolic-trough solar radiation concentrators and a thermal energy storage system using molten salts that allows it to generate electricity in the absence of solar radiation, serving an average of 135,000 households.