The U.S. DoI announced that it had issued a Record of Decision approving an environmental impact statement for developing solar energy facilities on almost 20 million acres of public lands in six states.

The U.S. Department of the Interior announced that it had issued a Record of Decision approving an environmental impact statement for developing solar energy facilities on almost 20 million acres of public lands in six states — nearly a million acres of that in California.

The Programmatic Environmental Impact Statement for Solar Energy Development in Six Southwestern States (PEIS), in the works since 2010 as a joint project of Interior and the Department of Energy, would establish 17 Solar Energy Zones (SEZs) in California, Arizona, Colorado, Nevada, New Mexico, and Utah, comprising 285,000 acres, in which permitting for utility-scale solar energy development would be expedited.

The PEIS also establishes about 19 million acres of “variance zones,” in which additional solar development would be allowed — though without the shortcuts available to developers in the SEZs.

The Programmatic Environmental Impact Statement (PEIS) for solar energy development provides a blueprint for utility-scale solar energy permitting in Arizona, California, Colorado, Nevada, New Mexico and Utah by establishing solar energy zones with access to existing or planned transmission, incentives for development within those zones, and a process through which to consider additional zones and solar projects. 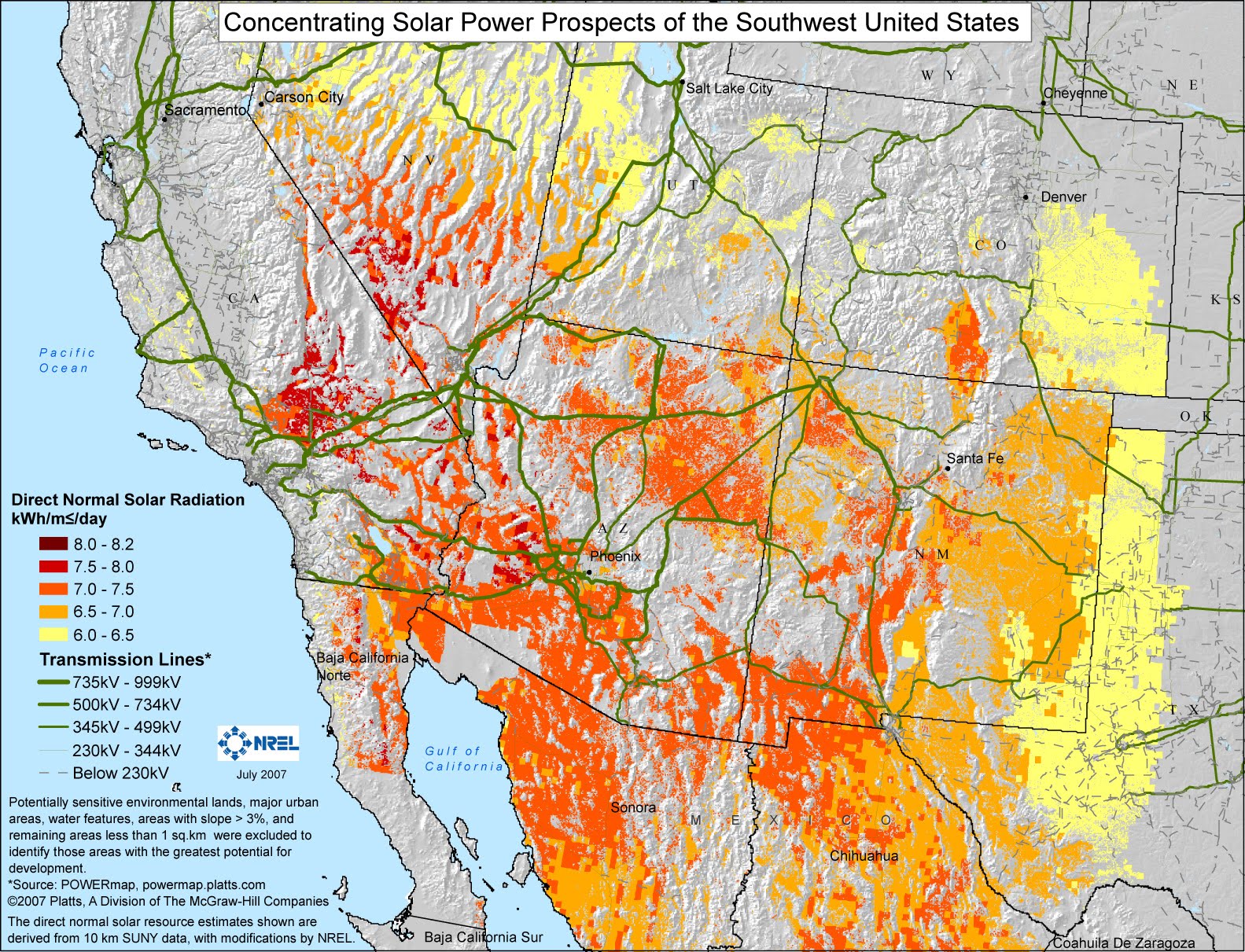 Today’s action builds on the Administration’s historic progress to facilitate renewable energy development. On Tuesday, with the authorization of the Chokecherry and Sierra Madre Wind Energy Project site in Wyoming, Interior reached the President’s goal of authorizing 10,000 megawatts of renewable power on public lands. Since 2009, Interior has authorized 33 renewable energy projects, including 18 utility-scale solar facilities, 7 wind farms and 8 geothermal plants, with associated transmission corridors and infrastructure. When built, these projects will provide enough electricity to power more than 3.5 million homes, and support 13,000 construction and operations jobs according to project developer estimates.

“Energy from sources like wind and solar have doubled since the President took office, and with today’s milestone, we are laying a sustainable foundation to keep expanding our nation’s domestic energy resources,” said Secretary Salazar, who signed today’s Record of Decision at an event in Las Vegas, Nevada with Senator Harry Reid. “This historic initiative provides a roadmap for landscape-level planning that will lead to faster, smarter utility-scale solar development on public lands and reflects President Obama’s commitment to grow American made energy and create jobs.”

The Solar PEIS establishes an initial set of 17 Solar Energy Zones (SEZs), totaling about 285,000 acres of public lands, that will serve as priority areas for commercial-scale solar development, with the potential for additional zones through ongoing and future regional planning processes. If fully built out, projects in the designated areas could produce as much as 23,700 megawatts of solar energy, enough to power approximately 7 million American homes. The program also keeps the door open, on a case-by-case basis, for the possibility of carefully sited solar projects outside SEZs on about 19 million acres in “variance” areas. The program also includes a framework for regional mitigation plans, and to protect key natural and cultural resources the program excludes a little under 79 million acres that would be inappropriate for solar development based on currently available information.

“The Solar PEIS sets forth an enduring, flexible blueprint for developing utility-scale solar projects in the right way, and in the right places, on our public lands,” said David J. Hayes, Deputy Secretary of the Interior. “Never before has the Interior Department worked so closely and collaboratively with the industry, conservationists and sportsmen alike to develop a sound, long-term plan for generating domestic energy from our nation’s sun-drenched public lands.”

The signing of the Record of Decision today follows the July release of the Final PEIS, a comprehensive analysis done in partnership with the Department of Energy that identified locations on Bureau of Land Management (BLM) lands most suitable for solar energy development. These areas are characterized by excellent solar resources, access to existing or planned transmission and relatively low conflict with biological, cultural and historic resources.

“We are proud to be a part of this initiative to cut through red tape and accelerate the development of America’s clean, renewable energy,” said Secretary of Energy Steven Chu. “There is a global race to develop renewable energy technologies—and this effort will help us win this race by expanding solar energy production while reducing permitting costs.”

Federal officials on Friday approved a plan that sets aside 285,000 acres of public land for the development of large-scale solar power plants, cementing a new government approach to renewable energy development in the West after years of delays and false starts.

At a news conference in Las Vegas, Interior Secretary Ken Salazar called the new plan a "roadmap … that will lead to faster, smarter utility-scale solar development on public lands."

The plan replaces the department’s previous first-come, first-served system of approving solar projects, which let developers choose where they wanted to build utility-scale solar sites and allowed for land speculation.