A new paper (Experimental Testing of a 300 kWth Open Volumetric Air Receiver (OVAR) Coupled with a Small-Scale Brayton Cycle. Operating Experience and Lessons Learnt) describes an on-sun test at the Plataforma Solar de Almería (PSA) testing site in Spain of a design for a CSP plant with a novel solar receiver/power block combination that has never been tried before. 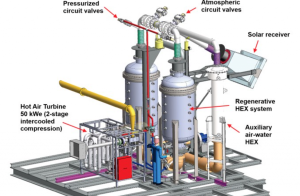 In tower Concentrated Solar Power (CSP) generally, mirrors surrounding a tower reflect and concentrate sunlight up to a solar receiver to heat a fluid to drive a steam turbine to generate electricity.

Whereas in combined cycle power plants run on natural gas (NGCC), highly-pressured hot gas drives a gas turbine in a Brayton cycle and then the exhaust heat powers a second cycle in a Rankine steam turbine, so the heat is used twice, increasing its efficiency.

While CSP designs coupling Brayton cycles using particles to transfer heat have been tried, the CENER team investigated using air for the heat transfer for the cost and efficiency advantages.

“Up to now, only pressurized air receivers have been used. We proposed a new approach decoupling the solar receiver from the Brayton cycle via a regenerative air-air heat exchanger between the two systems,” said CENER Principal Research Engineer Fritz Zaversky.

“The advantage of decoupling the solar receiver from the Brayton cycle with a turbine loop at around 8bar pressure means that the receiver can then be operated under ambient pressure, which makes the setup simpler and more cost effective. It increases the efficiency and reliability of the solar receiver.”

To achieve this transfer from ambient air pressure to high pressure air; a project partner; Tekniker designed and built a new air-to-air heat exchanger for the test at PSA.

The on-sun CAPTURE trial revealed some problems to fix; unexpected pressure losses in the high pressure cycle in its regenerative system, piping, filter and turbine, making it impossible to test the concept with the acquired equipment for the turbine start-up.

As a result, the trial could not be completed, as time ran out at the testing platform before being able to try out the solution. Dr. Zaversky was surprised by the setback but unfazed.“We know how to improve the design. We just need to minimize pressure losses in the turbine circuit and integrate appropriate start-up equipment.”

A bigger issue was the fundamental difficulty of implementing the solar powered combined cycle in an economic way, mainly due to the high operating temperatures. The paper concludes that perhaps a simple single cycle Rankine engine (which runs on steam) might actually have a lower levelized cost of energy paired with the (ambient air pressure) OVAR than a high pressure gas turbine.

“That’s because the feasibility and cost of some parts of the regenerative heat exchanger for the two different air pressures – which are not necessary in gas plants – makes the combined cycle not the best option,” he said.

But he added that if they did want to leverage combining the open volumetric air receiver with the highly pressurized Brayton cycle, one option – instead of air pressure conversion in the heat exchanger – might be to use CAES; electricity storage from the grid in highly compressed air (and this would be in addition to the normal CSP thermal energy storage).

Since CAES is already well understood and has attractive cost where it’s available, and could also store low value surplus renewables from the grid as well as help with increasing air pressure, costs could be amortized by extra earnings for grid services. This could be a way to make a solar powered combined cycle with the OVAR economically feasible, Dr. Zaversky suggested.

He estimated that the cost for that new trial would be about 6 million Euros, about the same as this CAPTURE project on-sun test at PSA, which was funded by Europe’s H2020 framework.

“The Horizon Europe programme would be the best source of funds, as a continuation of CAPTURE project,” he said. “This capitalizes on the investment already carried out as we could reuse and adapt the existing prototype.”