Just two years after the start of construction‚ the ACWA Solafrica Bokpoort concentrated solar power (CSP) Plant is now operating at full capacity‚ ahead of schedule.

Since inception‚ this R5bn foreign investment‚ led by developer‚ owner and operator ACWA Power‚ has created over 1‚200 jobs throughout the life of the development. The project is part of the SA Government’s Renewable Energy Independent Power Producer Procurement (REIPPP) programme.

“We are delighted to have achieved this milestone in such a short period‚” said Nandu Bhula‚ the CEO of Bokpoort CSP Plant. “Construction only began in June 2013 and for the plant to be supplying much needed power at full load in 30 months is a remarkable achievement.”

Chris Ehlers‚ ACWA Power Business Director‚ Southern Africa said: “We promised to deliver reliable and cost effective renewable electricity to South Africans on time and are very proud to see the realisation of that at Bokpoort CSP today. This is the start of South Africa becoming a major global solar power producer.”

The solar energy generated will be fed into the national power supply network under a 20-year power purchase agreement that is part of the Department of Energy’s REIPPP programme.

Bokpoort’s CSP technology effectively allows for the daily ‘banking’ of excess solar energy during the day‚ which can then be released after sundown‚ enabling electricity supply during peak demand periods between 5 pm to 9 pm and in the early morning. The thermal storage capacity of 1‚300MWh‚ which is approximately 9.3 hours of operation‚ is the largest-ever adopted for a solar power plant of this class and capacity in the world.

Bhula explained: “The thermal storage system works like a rechargeable battery that is charged during the day to be used when needed‚ especially during the peak period and at night.”

This makes concentrated solar power (CSP) the only renewable technology on a commercial scale to cover the country’s daily peak demand‚ which thereby helps to prevent load shedding.

Upington‚ near to which where the project is located‚ boasts one of the highest solar radiation footprints in the world‚ with the potential to power all of South Africa over the next few decades.

The local !Kheis community has been a key beneficiary of the project from the start‚ as Bokpoort CSP has invested more than R3.5m into education‚ local skills transfer and community infrastructure over the past two years. 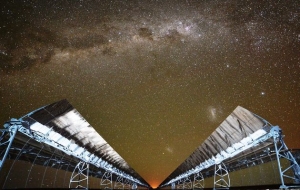 “We believe in improving lives in South Africa over the long-term. Through this project‚ we are not only helping power up South African homes but have had the privilege of making an impact in the lives of the !Kheis community‚ contributing to a positive future through various initiatives‚” said Ehlers.

Ehlers added that ACWA Power will continue to work closely with various role players to bring more solutions to South Africa’s energy challenges. “We are very upbeat about the country’s IPP programme and this achievement today demonstrates yet another track record of our ability to project manage multibillion rand capital projects.”